The film itself, Kid Auto Races At Venice, was pretty simple.  It was a “split reel” comedy (the length of half a reel of film) which when played ran about seven minutes long.  It was filmed at a real live event held in Venice, California–the Kid Auto Races.

This was two years after the Titanic went down. Think of that.

Just what were the Kid Auto Races?  These were real, ten-mile races for 14-year-old boys who drove one- and two-cylinder homemade cars.  That’s right, mini-cars built from scratch by 14-year-olds.  A 1914 article from Technical World Magazine noted: “Many of these cars, some of which are easily controlled, are capable of amazing speed…Regular road racing rules the contest and the fourteen-year-olds traveled the course with splendid judgment and the daring of older heads.”  (Times really were different back then!)  The route looped through Venice and Santa Monica and was lined with thousands of spectators–apparently up to ten thousand.  The ten-mile race was apparently held on January 10th, 1914, while there was a soapbox-derby-style “pushmobile” race on the eleventh.  The tiny Keystone crew filmed there both days.

Kid Auto Races doesn’t exactly have a plot, but centers around a funny (and surprisingly fresh) situation.  Real-life director Henry Lehrman plays a director who is trying to film the races, and the cameraman (showing him is a surprising break of the fourth wall) is Frank D. Williams.  Chaplin plays a tramp who keeps casually, insistently wandering into the frame, trying to get himself on film as much as possible.  Nowadays, we might call this an exceptionally bold example of photobombing.

For the first time audiences got to see Chaplin in his Little Tramp getup.  It’s all there–the big shoes, the baggy pants, the snug coat, the cane, the bowler, and most importantly, the little “toothbrush” mustache (bushier here than it would be later in his career).

It’s been said that Chaplin put together this costume by borrowing Roscoe Arbuckle’s big trousers, Charles Avery’s jacket, Ford Sterling’s size fourteen shoes and Mack Swain’s mustache trimmed down to size.  Symbolism!  But this story was probably created, with pride, by Keystone.  Of his Tramp costume, Chaplin said the following:

“I had no idea what makeup to put on. I did not like my get-up as the press reporter [in Making a Living]. However on the way to the wardrobe I thought I would dress in baggy pants, big shoes, a cane and a derby hat.  I wanted everything to be a contradiction: the pants baggy, the coat tight, the hat small and the shoes large.  I was undecided whether to look old or young, but remembering Sennet had expected me to be a much older man, I added a small mustache, which I reasoned, would add age without hiding my expression.  I had no idea of the character.  But the moment I was dressed, the clothes and the makeup made me feel the person he was.  I began to know him, and by the time I walked on stage he was fully born.” (Chaplin, My Autobiography, page 154.)

One of the most exciting things about Kid Auto Races it that it survived in astonishing clarity.  Not only do we in 2014 get see the newly-born Little Tramp in all his glory, but we get a good long look at the Edwardian era spectators at the race.

In a lot of the scenes the audience watches politely.  There’s a few that smile, or lean over a little to get a better look (it’s fascinating to see that this early on people didn’t wave or mug for cameras).  They’re interested in what the tiny Keystone crew is doing, but seem eager to watch the cars that zip past every so often. Of course, in a lot of scenes Charlie is simply strutting around, his facial expressions geared toward the camera.  From the audience’s point of view it probably wasn’t clear what he was doing (although one person–probably a kid–at the 2/3 mark was bold enough to throw a paper airplane at him!).

In other scenes Chaplin seems to be acting as much for the audience’s benefit as the camera’s. Around the 3/4 mark, for instance, Chaplin does a bit more physical comedy–more pratfalling, more arguments with Lehrman–and there the audience is clearly laughing and enjoying the goings-on (especially the boys on the left).

Little did all these people know that by the end of that year Chaplin would be one of the most popular comedians in films; by 1916 he would be recognized as the most famous star in the world.  In January 1914 they saw what was to them just another actor.  The filming of one of the most historically important films of all time was, for them, something novel to watch as the races went on.

You have to wonder–did any of them ever think back to that day when a funny little man strutted around and argued with a surprisingly aggressive director, and realize just how lucky they’d been to be so near?  Did they ever proudly tell their friends and family about the one time when they had seen Charlie Chaplin himself making a film in front of their very eyes?

And personally, I can’t help wondering: Did Albert Van Vranken, Jr., who won first prize in the 1914 Kid Auto Races, ever go see Kid Auto Race At Venice himself, and did he ever proudly tell his friends about how his race was in a Charlie Chaplin film?

You just got to wonder sometimes. 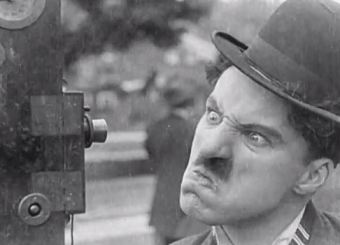 Information on the Kid Auto Races came from film historian John Bengtson’s amazing blog Silent Locations.  You can read even more details about the races here: