One of the most enduring vaudeville stars was not a man, woman, child, or even technically an animal.  It was a drawing of an animal–Gertie the Dinosaur, one of our earliest animated characters.  She was brought to life by the talents of the great Windsor McCay .

McCay was an American cartoonist who drew such popular comic strips such as Dreams of the Rarebit Fiend and Little Nemo in Slumberland.  He was arguably one of the most stunning visual artists of the entire 20th century.  If you are interested in Art Nouveau at all, his work is a must-see.  Feast your eyes upon one of his popular Little Nemo comics:

Eh, I could draw this. I just don’t feel like it right now.

McCay was born in 1867…or 1871…or maybe even 1872.  Accounts vary, rather frustratingly.  He discovered his drawing talent at a young age, and by adulthood he had found work designing posters and advertisements (he would often draw crowds by quickly drawing advertisements in public).  He became a prolific newspaper illustrator, and by the early 1900s was creating his own comic strips.  His success, particularly with Dreams of the Rarebit Fiend, lead to his break into vaudeville.  He was hired to give “chalk talks” (a monologue given while quickly making a series of drawings on a chalkboard), which proved very popular.  In his spare time he kept up with all of his comic strips and other newspaper work.  McCay was no slacker, is what we’re saying here.

In his, err, “free time” he became interested in animation, which back then was still very much in the experimental stage.  His first animated film was the self-explanatory Winsor McCay, the Famous Cartoonist of the N.Y. Herald and His Moving Comics (1911) followed by the funny How a Mosquito Operates (1912).

Then, according to one account, McCay and a friend visited the Museum of Natural History in NYC.  While looking at dinosour skeletons, his friend remarked: “Wouldn’t a man with a trained dinosaurus be a riot in vaudeville?”  And McCay was inspired–why not animate a dinosaur for his vaudeville act?  Why not create a character who interacts with her creator, as if by magic? And thus Gertie the Dinosaur was born. 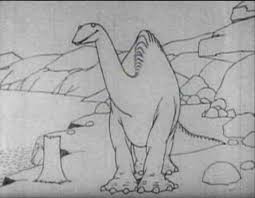 Gertie the Dinosaur was drawn with black ink on white rice paper (like much of early animation).  Each piece of paper was only a little larger than a 5 X 7 photo.  McCay said it took around 10,000 drawings, although the figure may be closer to 6,000 (an art student, John A. Fitzsimmons, had the task of retracing the background for each and every one.  We don’t envy John A. Fitzsimmons.).  Compared to much of the animation at the time, Gertie was amazingly fluid, and it made good use of perspective in the limited frame.

Gertie herself was a wonderfully designed character–both literally and figuratively.  McCay based her body movements on animals like lizards and cats and added charmingly realistic details like having her head weave from side to side as she walked.  She also had personality.  She was playful, mischievous, easily distracted, and minded her master in much same manner as a slightly spoiled dog–when she felt like it.

In the film, Gertie bows, raises her feet on command (most of the time) and does a dance for the audience.  Her great size is playfully alluded to as she eats an entire tree, tosses a comparatively small woolly mammoth into the water,and catches a pumpkin in her mouth–which for her is about the size of a plum.

Gertie’s debut was on Feb. 8, 1914, at the Palace Theater in Chicago.  To introduce his act, McCay appeared onstage holding a whip (like a circus master) and gave a short talk on animation.  Then Gertie appeared, seemingly interacting with McCay much like trained elephant or lion.  As a finale, McCay walked offstage and his small, animated figure “appeared” onscreen.  The act ended with Gertie “carrying” her master offscreen.

There was, in a sense, two versions of Gertie the Dinosaur.  One was the original vaudeville version.  The other is the special “extended edition” version that survives today (and which is easy to find on YouTube).  This originally appeared in movie theaters toward the end of 1914, with the added intertitles and live-action prologue in place. This “extended edition” used the same animation that was in the vaudeville show (Gertie was only drawn once.)

(Side note: Apparently in the vaudeville version the “pumpkin” was an apple, which McCay appeared to toss at Gertie’s open mouth while stealthily hiding the real apple in his sleeve.  Which is partly why the “pumpkin” is so small, although it still works as a joke about Gertie’s size, especially compared to the animated McCay at the end.)

Note the use of “dinosaurus.”

While researching info about this short, certain misconceptions seemed to pop up everywhere.  So to be clear:

And now, for the most persistently widespread rumor of them all *drumroll*:

But here’s one fact about Gertie that’s true: it is indeed the first cartoon to feature a dinosaur.  Which brings up an interesting era of history–apparently, while dinosaur fossils have always been known to exist, it wasn’t until the early 19th century that serious scientific study of dinosaurs became widespread and organized.  By the 1870s paleontologists Edward Drinker Cope and Othniel Charles Marsh had a fossil-hunting rivalry so intense that even today the Bone Wars are a thing of legend, no kidding.

But while dinosaurs were of interest in the 1910s they weren’t yet a craze.  (Imagine, a time when kids weren’t running around with dino toys.)  The public generally didn’t know a lot about them, and ads for Gertie the Dinosaur tended to include a helpful explanation of the mysterious “dinosaurus.” As you can see here on the left.

I wonder if Gertie helped spark an interest in dinosaurs among the public, at least in the U.S.  Knowing kids’ love for dinosaurs today (myself, when I was little I had posters, toys, books, etc.), you also have to wonder how many of Edwardian era children became eager to learn more about those prehistoric monsters.

I know one young man who was inspired by it.  Buster Keaton’s The Three Ages (1923) has him playing a caveman, who in one scene rides atop a stop-motion dinosaur–his little nod to Gertie.

And Walt Disney, who saw McCay’s short when he was 12, was also inspired by it.  He included a clip from Gertie in an episode of his 1950s TV series Disneyland, in a segment on early animation.  In the voiceover he stated, “Winsor McCay’s Gertie and other animation novelties stimulated a great public interest and created a demand for this new medium. This, in turn, encouraged other pioneers to creative efforts that in time, led to the establishment of the animated cartoon as an industry.”

Today, if you visit Disney’s Hollywood Studios you can stop at a whimsical ice cream stand with a sign proclaiming “Dinosaur Gertie’s Ice Cream of Extinction.”

One of my most important sources for this article was “The Making and Re-making of Winsor McCay’s Gertie (1914)” by David L. Nathan and Donald Crafton.  Their article can be accessed here.

http://www.filmsite.org/animatedfilms.html
http://disneyparks.disney.go.com/blog/2011/05/have-you-seen-gertie-at-disneys-hollywood-studios/
Various poking around in IMDB.com and Wikipedia, as everyone does.

8 thoughts on “Gertie the Dinosaur!”