Welcome to Silent-ology, Snoopathon readers! This is the very first blogathon I’ve ever been a part of, and I thank Fritzi of Movies Silently for hosting it.  I can’t tell you how happy I am that you are stopping by. Are you a silent film lover? Then you should feel right at home. Not too familiar with silents? Don’t worry, for this place should feel homey to you in short order. Feel free to browse my articles (here’s one) and feel even freer about leaving comments. I love comments like Douglas Fairbanks loved tanning.

Before his streak of famous epics and melodramas like Intolerance, Broken Blossoms, and Way Down East (and, yes, The Birth of a Nation), D.W.Griffith passed the time by making a paltry 500 or so short films for the American Biograph Company. This meager assortment spanned the years 1908-1914, and featured a wealth of dramatic, sentimental, political, and at times even comedic subjects.  These films are records of more than just stories and actors, but of the amazingly quick evolution of film techniques and the growing sophistication of filmmaking.

One subject that Griffith revisited many times was war, often the Civil War (as we most thoroughly know).  War provided not only opportunities for creating battle scenes–which grew in scope, ambition and cool clouds of gunsmoke by the year–but near-limitless opportunities for drama.

One of the earliest examples of a Griffith film with a war theme is the ten-minute short 1776, or The Hessian Renegades (1909).  The setting, as you might guess from the title, was the American Revolution, and the subject itself was a very early incarnation of the now-familiar “spy” genre.  Griffith had been with Biograph for only about a year by this time, before Lillian and Dorothy Gish and Mae Marsh were on board and before Robert Harron had graduated from being a messenger boy/bit player (he can be seen here as a farmer). But even at this date Griffith had begun figuring out just what could be done with limited technology and a heap of creativity.

Being a 1900s film, it’s easy for us 21st-century viewers to dismiss it as being “primitive.”  The first viewing will probably bring out a few chuckles and guffaws, especially if you aren’t familiar with films of this vintage.  But remember, folks, this was Biograph.  This was a studio chock-full of talent.  It had the sort of atmosphere that could never quite be recreated again.  There’s always something a little special about the Biograph products, and The Hessian Renegades is not an exception.

Now one of the first questions you might ask is–just what the heck are Hessian Renegades?  (That’s what I had to ask, anyways.)

They were German auxiliaries (Americans scoffed that they were “mercenaries”) recruited by the British during the 1700s.  They were called “Hessians” due to being from Hesse-Kassel, a German state.  They are most closely associated with the American Revolution, when an estimated 30,000 Germans fought on the British side.  They first came to America in the year 1776, hence the film’s title.  (Side note: The famous Washington crossing the Delaware painting?  If you can’t recall just who Washington was going to attack after crossing the said river, it was the Hessians.)

So with that clear, let’s look at the film.  SPOILER ALERT–because this 10-minute 1909 drama is the last film you want me to spoil for you, right?  Move aside, Psycho and Inception!

As for the plot, here’s a handy-dandy description from a vintage 1909 movie magazine (yup, those magazines were around since about 1908, if memory serves me correctly): 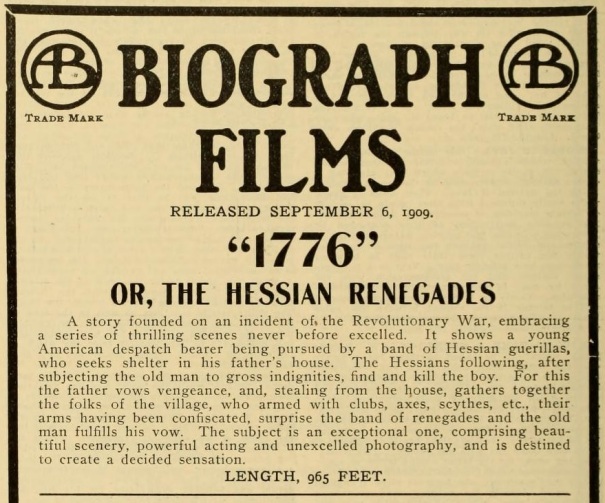 Like many of the Biographs, this was a well thought-out story for such a short film.  Not a second is wasted, but it never feels rushed.  The spy’s mission has a definite sense of importance.  The drama quite intense if you think about it–the family witnesses the cold-blooded murder of one of their own, and a young woman is threatened by assault.  For the plot’s purposes (and probably due to conventions of the era), the villains have no redeemable qualities.  (Which is putting it pretty mildly.)  They represent serious threats to the noble American lives–not to mention to the virtues of young American women.  When the family takes it upon themselves to complete the mission, it’s a way to avenge the son’s death but it’s also out of patriotism.  It must have been very gripping short to audiences at the time, and indeed it seems to have been very well-received.  Personally, the scene where the spy’s hiding place is discovered is the one that sticks in my mind the most.

My guess is that film lovers will probably be the most interested in this film as an artifact of early moviemaking.  With that in mind, what can we learn from The Hessian Renegades?

What will stick out the most will be the acting, which will seem pretty florid to our eyes at first.  For instance, the Hessians are cartoon-ish villain stereotypes who laugh uproariously when the spy is shot (in case we don’t get it, one even munches on a snack while looking down at the dying man).  We learn little about our spy/hero in general, seeing him only in a few moments of desperation and exaggerated postures.  No wisecracking, tux-wearing movies spies with femme fatale love interests here–it would take another couple decades for those Hollywood formulas to set in.

But it helps to keep in mind that this style of acting was all done with sincerity, and by actors with experience (as well as good camera presences, which can be easy to tell if you’ve seen a load of old films–Biograph knew how to pick ’em).  And happily, the most familiar of these actors to us today would be Mary Pickford, looking quite adorable in her 1700s gown.  Her presence helps us “connect” with the film–and she gets a couple of humorous scenes to boot. 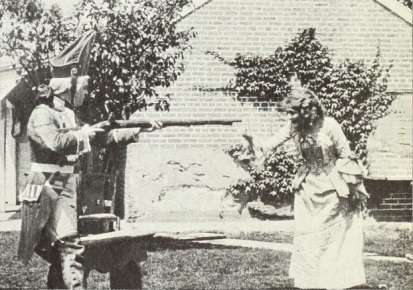 Technique-wise, film was still very much affected by stage conventions.  The scenes in the farmhouse in particular can seem very “stagey”.  You can see how the actors are moving from mark to mark.  There’s a scene that’s just like those moments in sitcoms when characters say “can I talk to you for a moment?” and they just move to the other side of the room even though everyone can still hear them.  However, to my mind, this is a little less “primitive” than we might assume.  Early films like these seem to take the idea of a moving picture seriously. Here’s an experiment: during the farmhouse scenes, pause the film at virtually any moment and you will have a nicely composed tableau vivant that can tell a story in itself.

As far as camera work, there’s an early shot where Moore looks around for the enemy, then runs out of the frame just before they come into view over a hillside, playing with perspective effectively as well as the audience expectations.  Similar subsequent shots are early glimmers of the most famous ones in The Musketeers of Pig Alley (1912).

While all this description may be intriguing, truth be told the virtues of The Hessian Renegades might not be clear the first time you watch it.  The surviving print is distractingly blurry, making the “spy mission” story lose much of its dramatic effect.  And at the risk of being one of those people who start “what speed should this film be shown at?” arguments (it happens at every BBQ, am I right?), my guess is that it was meant to be projected at a speed very close to natural movement.  There were many little moments that were difficult to catch without repeated viewings–moments that were obviously supposed to help flesh out the characters.  Thanks to the film speed they whisk by almost too fast to catch.  I’ll take a little blurriness over wrong film speeds any day.

Thinking back, I can think of one especially fun moment which really makes me wish a better print of The Hessian Renegades was available.  It’s when the spy’s father is rounding up the nearby farmers.  A farmgirl (who I think is played by Florence Lawrence herself) hurries over and is bound and determined to join in the attack.  He tries to turn her away–“this is no place for you!”  Ah, but this is no unprepared damsel–she pulls a huge pistol from her apron, and, afire with patriotism, gestures for everyone to follow her as she dashes off.  The men stare for a moment, then laugh and run to catch up.  This, my friends, was Biograph.