We usually assume, not unreasonably, that everyone directly connected with the silent era is long gone.  The only exception might be a few child actors/actresses who worked in the late ’20s.  After all, it’s the 2010s.  You can do the math.

But every once in awhile you hear of an early star’s passing, and you wish you had been aware of them earlier.

Carla Laemmle died a few days ago, at the amazing age of 104.  Her uncle was the famous Carl Laemmle, who co-founded Universal Studios back in 1912–or when she was about three years old.  I had to do a double-take the first time I saw her name, and indeed, she had been born Rebecca Beth Laemmle but changed it in honor of her uncle.  She was six when The Birth of a Nation was released.  She was a teenager during the heyday of Chaplin, Keaton, and Lloyd.  She basically grew up right along with the movies. 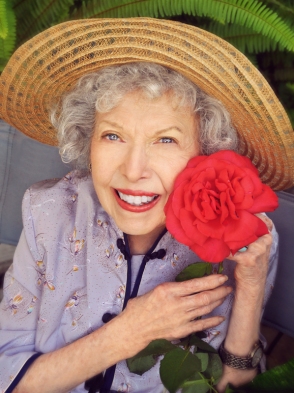 This photo was taken around her 100th year. Yes.

Carla played bit roles in various films, the most famous ones being The Phantom of the Opera (1925) and the original Dracula (1931).  In the latter, she had the honor of speaking the very first lines.

Her last small role was in On Your Toes (1939)…until several decades later, just after the 2009 book Growing Up With Monsters: My Times at Universal Studios in Rhymes appeared (co-authored by Daniel Kinske).  Her time working in classic horror films made her a minor celebrity.  She made appearances in a few movies (one is the yet-to-be-released Mansion of Blood) and was in a short documentary about her life in 2011.

I read a Yahoo article about her passing, and was touched by many of the comments people were leaving.  Take a look:

She is from an era that will never occur again. Movies were magical in that era.

I can’t even imagine. She lived and witnessed the Golden Age. Even modern “stars” would have no idea.

Rest in Peace beautiful lady. I fell in love with silent films when I was a teenager in the early 1970’s, and whenever I can catch one on tv I will stay glued to the screen. They had an allure that continues to fascinate me. I prefer classic films to any new film anyday!

A true beauty, true class, unlike that kardastion trash

She was so beautiful! I just watched the Charlie Chaplin movie the other day. It was a very special time for Hollywood! If you ever want to learn to act with just your body and facial expressions just watch an old silent film.

They could show you exactly what they were thinking with an eyebrow.

I wish I could have met and spoken to her. I’ve seen her in films. We lost another treasure when she died.

R.I.P. indeed, Carla.  We salute you for your role in film history, and you will never be forgotten.