In addition to my “Thoughts On…” series I was also occasionally put the spotlight on an obscure silent film that I think is interesting (for varying reasons).  This can be a film that is, obviously, hardly watched, or maybe it floats around but never gets discussed, or perhaps the casual silent fan just doesn’t know it exists.  Enjoy!

If you’re a fan of early film history, you’ve probably gotten into at least a few of the D.W. Griffith-directed shorts by the American Biograph Company.  These one- to three-reel “Biograph shorts” from the early 1910s (which can also be handily referred to as “bite-sized gems of filmmaking genius”) prove how rapidly filmmaking matured.  The New York Hat, The Musketeers of Pig Alley and The Battle of Elderbrush Gulch are among the most famous and talked-about of the bunch.

Many of these shorts have left a deep impression on me, as well as helped solidify my fondness for the excellent Biograph stock company (Mary Pickford, Mae Marsh, Robert Harron, Henry B. Walthall and the Gish sisters are some of its graduates).  But there is one short in particular that I thought was astounding–yet few people seem to mention it.  It’s The Female of the Species (1912).  And yes, I will be discussing spoilers.

Among the crowd of Biograph’s political dramas, war films, light comedies and melodramas this film stands out.  It’s a strangely modern piece, focusing on a few characters and a tight plot. It’s shot with harsh poetry in a windy desert landscape–as much a character as the people themselves.

There are four main characters–the husband, the wife, the wife’s sister, and the “other woman”, played respectively by Charles West, Claire McDowell, Mary Pickford and Dorothy Bernard. They are the last survivors of an abandoned mining camp, located in a remote desert region.  We don’t know why the camp is abandoned, but the film suggests it could be due to disease combined with or brought on by the territory’s harshness.

The opening shot shows the wife and her sister outside, soon joined by the husband.  They seem weary; the mood is somber.  Having no other options, they decide to leave the camp and travel across the desert.  There is one other person left in the camp–a young woman (as I’ll call her, although she’s around the same age as the other female characters).  The wife invites her to travel with them.  She thanks them profusely, seeming relieved that she won’t have to fend for herself.

It’s evident that the husband is falling ill; the young woman tries to help him at one point, inadvertently starting some tension between her and the wife.  The sister observes this, and also begins to suspect the young woman.

At one point the wife and sister catch the two in a compromising situation.  Unaware that it was the husband who had been trying to seduce the young woman (who was unwilling), they are convinced of her guilt.  In a resulting struggle, the ill husband suddenly collapses and dies.

With the husband now buried (by the hand of the grieving wife herself) the three again go “on the terrible way”.  They wander through the bone-dry landscape, established in a poignant shot that could take a novel a whole chapter to describe. 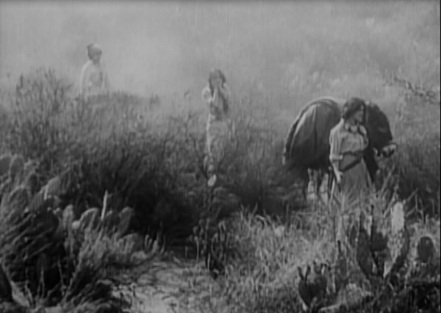 The loneliness of the desert and its constant blowing wind begins to drive the wife and sister mad (shades of the future film The Wind).  Their anger toward the young woman grows, and they become bent on vengeance for the husband’s death.  In the film’s best scene, the young woman, nervous and only dimly aware of the danger, lies down to rest.  The camera cuts back and forth from the wife’s attempts to sneak toward her with an ax and the young woman’s fitful jerks awake–growing suspicions keeping her from being able to relax.  The fierce winds throughout the scene add to the feeling of helplessness in the face of threatening forces, as well as to the feeling of becoming unhinged, of mentally flying apart.

A title card introduces “The Indian family athirst”, a man, woman and baby struggling to make their way through the desert.  When the woman collapses, the man tries to steal a canteen of water from two sleeping travelers, who waken and shoot him.  (They seem shaken when they realize he is dead although they callously leave the body.)  The woman dies as the baby cries in her arms.

In the meantime, the young woman has reached the point of exhaustion.  The wife again advances with ax in hand, but then she hears the baby’s cries.  Startled, she rushes to find the infant.  Significantly (though subtly in the film) she drops the ax.

Softened by the presence of the baby, the wife and sister find it in themselves to forgive the young woman.  The film ends with them fully reconciled, and the title card “Womankind”.

This has to be one of the most unforgettable Biographs Griffith directed.  Many Biographs include psychological drama on some level; this one revolves around it.  In fact, the full title is The Female of the Species: A Psychological Tragedy.

McDowell and Pickford are excellent.  You truly get the sense that their characters have survived so many hardships that they’ve toughened to the point of cynicism.  McDowell’s character has a commanding presence, and Pickford’s scheming observer complements her well.  Bernard is also excellent as the young woman, good-hearted and pathetically trying to please, who becomes the innocent target of the other characters’ psychoses. 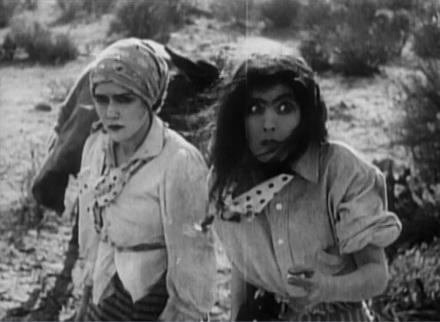 Technique-wise, the compositions are impeccable.  There are quite a few closeups, as well as key Griffith shots where the actors walk up to and just past the camera.  The camera also captures the essence of the landscape.  Sunlight glows through the dust caught in the blasts of wind, and lights up the women’s streaming hair.  The wind adds to the characters in a sense; Bernard’s hair whips back from her pale face for an almost Madonna-like effect, while McDowell’s hair looks increasingly wild and tangled.  Pickford’s hair, on the other hand, is concealed beneath a scarf–for visual balance perhaps, and also so there’s nothing in the way of her cold gaze.

Modern viewers might be surprised by the ending, and almost certainly be tempted to interpret it a certain way.  “Oh!” they might say, shaking their heads with a condescending smile “so the lesson is that the womenfolk need to mind their babies or they’ll just cause a bunch of trouble, eh?  How very Victorian.”  Tempting, yes (and being awfully picky I would remind them that 1912 was not part of the Victorian era) but I’m thinking this is the wrong way to look at it.

Let’s examine the title–The Female of the Species.  It’s deliberately broad.  Why?  This wasn’t an uncommon reference at the time (in slangy newspaper-speak, to be clear), but clearly Griffith is stating his intentions with the film.  In a sense, the maternal instinct is depicted as being  powerful enough that it can even create a bond among these three women, helping them to overcome madness and mistrust.  The instinct has the power to bring about peace.  And it is touching how an innocent baby’s cries prevent the death of an innocent woman.  By contrast, the only male character of note, the husband, turns out to be unfaithful, and the two male travelers shoot a man and leave his body.  But the three women of the picture are vividly and compellingly drawn.

You can watch The Female of the Species at the link below, although it doesn’t include music.  For the best experience get the D.W. Griffith: Years of Discovery 1909-1913 DVD set, which includes a wonderfully evocative soundtrack.  The DVD is available online and on Netflix.

15 thoughts on “Obscure Film Recommendation: “The Female of the Species””