You run into it time and time again when reading about film history: “German Expressionism, German Expressionism.” It pops up even more than “French New Wave,” another term that tends to make people’s eyes glaze over. Silent newbies and casual fans probably wonder: just what exactly was this movement that all the film historians go nuts for?

To answer that, we have to glance through a little art history, learn a bit of theater history, reflect on WWI and Germany, and get acquainted with how “the ghosts which haunted the German Romantics had revived, like the shades of Hades after draughts of blood.”

Or something like that. Bear with me, for there’s a lot of pieces to put together to get a good picture of German Expressionism.

Let’s remember that the first few decades of 20th century had unveiled many great inventions, discoveries, and technologies. The pace of life had to start running to catch up. Thanks to this rapid “modernization” there came a hearty interest in everything new and unique–and modern art started to make its mark, especially in Europe.

Much of modern art involved punting traditional art clean out the window and drawing upon emotion and psychology for inspiration instead (with varied results). Themes like madness, violence, and alienation were not uncommon. Many modern artists were also intellectuals, trying to figure out mankind’s place in this new industrial world. With anti-bourgeois witticisms at ready and somber Manifestos in hand, some banded together and created movements: Cubism, Fauvism, Futurism, Surrealism, a few other Isms, and our area of interest, Expressionism.

You may have seen this example of it.

While Expressionism did start in Germany, it’s harder to define than, say, Futurism, which helped us out by published handy manifestos declaring things like, “Except in struggle, there is no more beauty.” (Futurists were…different.) It even went beyond art–there was Expressionist literature, too. In 1910 Czech art historian Antonin Matějček gave this incredibly simple explanation of the movement:

An Expressionist wishes, above all, to express himself… [an Expressionist rejects] immediate perception and builds on more complex psychic structures… Impressions and mental images that pass through mental people’s soul as through a filter which rids them of all substantial accretions to produce their clear essence […and] are assimilated and condense into more general forms, into types, which he transcribes through simple short-hand formulae and symbols.

In other words, that Sharpie drawing on your wall of a wobbly girl towering over a purple tree, courtesy of your 6-year-old, conveyed the emotions of happiness and purpleness without resorting to traditional representations of a girl or a tree. It is quite Expressionist (and face it, you sure felt emotional when you discovered it, hey?).

So this is all well and good, but what about German Expressionism?

Its official beginning was in 1905, when four architecture students from Dresden, Germany formed a group called Die Brücke (The Bridge). They wanted to create art that was extremely emotional and influenced by both the past and present (thus connecting them–like a bridge!). Their tastes were pretty eclectic–not only did they like those slightly creepy old German woodcuts, but tribal art from Africa and Oceania too, and of course modern art. Put all those together and the result was…early German Expressionism.

Die Brücke gets credit for getting the ball rolling on those unusual angles and bold lighting that would pop up in classics like Nosferatu. Other German artists started exploring similar styles of painting, resulting in…well, work like this: 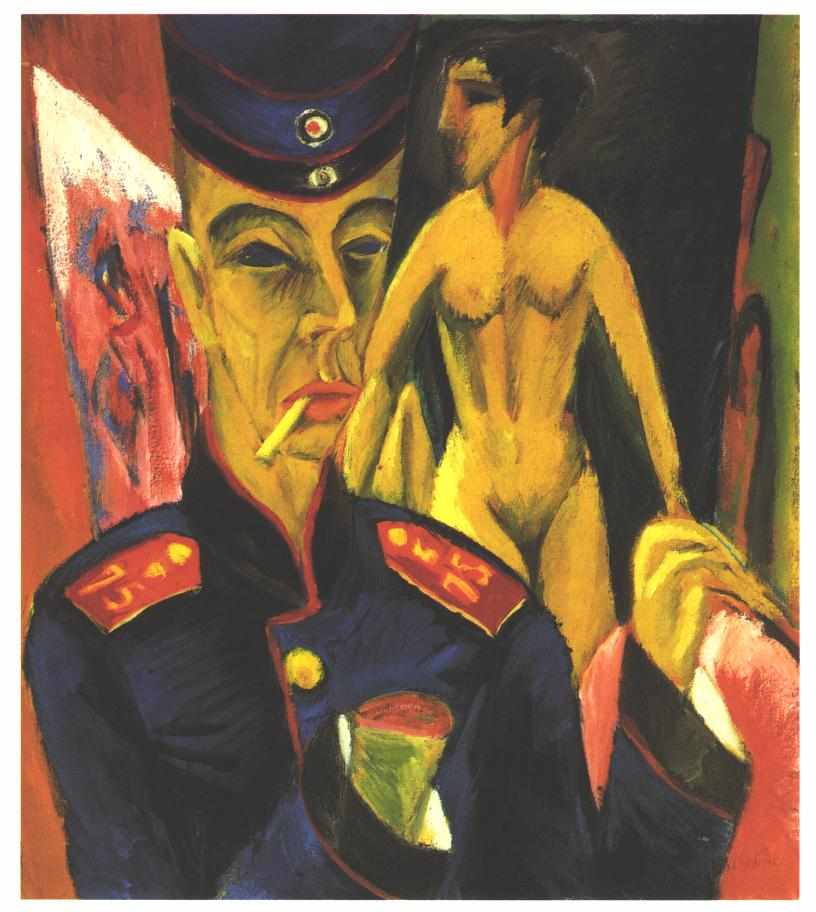 Now, around this same time theater was also getting artsy, trying out daring new styles in set design, music, choreography, writing, etc. Keep in mind that at this point theater was still king (as it had been for hundreds of years). It was the go-to entertainment. Film still had some maturing to do–while being strongly influenced by the theater.

One of the biggest figures of the theater scene in Europe was Max Reinhardt, owner of the prestigious Deutsches Theater in Berlin.

He was involved in every detail of his stage productions. He used dramatic lighting techniques (like having a darkened stage with a single beam of light falling on a face) and introduced the very latest in set designs.

The Deutsches Theater was the place to be in Berlin–some people attended several times a week. Reinhardt was a massive influence on German entertainment, is what we’re saying here.

So to quickly recap, in the early 20th century there was:

It wouldn’t take long for film to start soaking up these influences like a sponge. In 1913 the first German film that’s just a little bit German Expressionist was released: The Student of Prague. It’s one of the earliest horror films, telling the strange story of a student who is promised infinite wealth by a sorcerer in exchange for the student’s reflection in a mirror. It showed that film was perfect for conveying dreamlike images, the macabre, and, of course, emotion (as Expressionists loved).

The Student of Prague‘s director was Paul Wegener, who had once been an actor in Max Reinhardt’s theater, and it starred several actors who had also worked in Reinhardt’s theater (told you Reinhardt was important). Wegener would make other German Expressionistic films too, like the first The Golem (1915) and Homunculus (1916).  Fellow German directors took notice.

But then in 1914 the Great War, the War to End All Wars, began. Its ugliness and brutality shocked the world in way all those dour artists hadn’t imagined.  The themes of alienation and death in some modern art were rather prophetic.

One result of the war (out of too many to count) was that Germany soon banned the import of most foreign films. (Maaaybe because the market was stuffed with anti-German propaganda.) Thus Germany found itself scrambling to meet the demand for movies, churning out melodramas, documentaries, comedies, and more almost by itself.

Almost…by…itself. Germany, with its legacy of creepy woodcuts and grim Grimm’s fairytales, its metaphysical musings on the state of mankind and strivings toward world power, Germany…with its German Expressionism.  In that isolation, something began to evolve.

Not long after the War ended, other countries started to warm up to the defeated Germany again, and a little film called The Cabinet of Dr. Caligari (1920) was released.

All the possibilities of German Expressionism exploded on the screen in Caligari. Its writers (writers Hans Janowitz and Carl Meyer) were both big fans of Wegener’s dark films. They had both been scarred by WWI. They felt that using dramatic angles and lighting in film could be a perfect match for the macabre mood of the times–and they went above and beyond in showing this. Few other films would be as daring as Caligari. The world was talking about German films.

The Twenties saw classics like Nosferatu (1922), The Last Laugh (1924), and Metroplis (1927) released. As you’ve noticed, most films under the label of “German Expressionist” dealt with topics like madness, betrayal, and death–these were intellectual topics, you see. And, perhaps, they also had their roots in old German folk tales, woodcuts, and legends of the supernatural.

These things seeped into Hollywood as well. At the tail end of the silent era, Sunrise (1928) represented a perfect meld of Hollywood magic and German Expressionism.

But it doesn’t end with the brassy early talkies period–this dynamic movement influenced film noir, practically invented the horror genre, and continues to inspire any filmmaker that tries to think outside the box today. 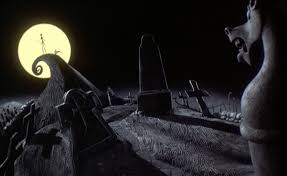 As you can see, German Expressionism is far more than a dry-sounding term in a history book. It was born from a desire to be fresh, radical, and in-your-face modern, although it could never forget its legacy of folk tales and spiritual beliefs. Since one of its influences was the very real pain and devastation of WWI, it’s no wonder you can still sense the power of the darker German Expressionist films today.

And most significantly, the images it created helped transform our understanding of just what that young art form called “film” could do.

21 thoughts on “So What Exactly Was German Expressionism?”