All a horror film need promise is horror — the unspeakable, the terrifying, the merciless, the lurching monstrous figure of destruction. It needs no stars, only basic production values, just the ability to promise horror.  —Roger Ebert

When I was little, my family had this big book full of pictures of movie stars and scenes from classic films.

Some I knew–I loved The Wizard of Oz so much that once I watched it every day for a week, and I’d grown up with people like Jimmy Stewart and Lucille Ball. But at the beginning of the book, where the pictures of the silent film stars were (all I knew back then were a couple names, Chaplin and Mary Pickford) there was one still labelled “The Cabinet of Dr. Caligari (1919).”

This is the one.

This still was always startling to me.  There, alongside all the girls with curled hair and profile shots of leading men, was this bizarre scene. Even as a kid I knew this was supposed to be Art. Harsh angles, round shapes like ink blots, sharp whites and blacks, that modern-looking figure sliding across the wall…plainly, this was all something Artsy and Serious that Serious Adults understood, like those “modern” paintings from my dad’s History of Art book. The title was odd too–“Caligari.” It kind of gurgled when you said it. And even the letters of “Caligari” had harsh angles and round shapes.

And the book said the film was from 1919–1919!!  How could a film so incomprehensibly old be so Artsy and Serious? It boggled my mind.

And thus I had always thought of Caligari as something apart, something daring…something unfathomable.

A few years ago I finally watched Caligari. I discovered that unlike what my childish self had assumed, Caligari was definitely fathomable. But was it daring, something set apart? Oh yes, I had been right on the nose about that.

(Much of this article is Spoilers territory, which is necessary as you’ll see. If you haven’t seen Caligari yet, by all means drop everything and go watch it right now.)

The plot, concerning a series of murders in the town of Holstenwall by a mysterious killer, wouldn’t be that unusual if not for two things. The first is that the killer is being controlled against his will by another man, thus making him a kind of innocent pawn. While the killer is a dangerous, freakish figure, he gets a bit of sympathy because of this innocence (no small thanks to actor Conrad Veidt).

The second, obviously, is the artistic design.

These designs almost out-Expressioned German Expressionism. At a time when many films tried to impress audiences with their realism (consider the giant sets of Intolerance), Caligari defiantly went in the opposite direction. Its characters seemed to inhabit Cubist paintings–disorienting Picasso dreams come to life, three-dimensional enough to move around in but with surfaces still strangely flat.

What was the story behind this? I knew the background behind the German Expressionism movement, but why did such extremes pop out all the sudden in this particular film?

I took a look at the two writers behind Caligari, Hans Janowitz and Carl Mayer. Their stories made me look at the film in a whole new light, and I’m sure they will for you too:

Janowitz, a native of then-Czechoslovakia, became an officer in WWI. He returned from the war a pacifist with a deep mistrust of authority–particularly the kind of authority that had sent countless young men “over the top” to be slaughtered.

His time in the war wasn’t his first brush with senseless death–he had had a profound experience one night in 1913. He had been wandering through a fair in Hamburg hoping to run into an attractive girl he’d seen earlier. He thought he heard her laughing in a park nearby. There he saw a “shadowy” figure of a man emerge from some bushes and disappear into the park. It was too dark for Janowitz to see anything else.

The next day the papers shouted, “Horrible sex crime on the Holstenwall! Young Gertrude…murdered.” Janowitz, horrified, wondered if Gertrude was the girl he’d noticed at the fair. He attended the funeral, and during the ceremony recognized that same “shadowy” man also in attendance. (The story stops there, tantalizingly.)

Mayer grew up in Austria with three younger brothers. Their father being a wealthy stock speculator, you’d think the boys would have a pretty comfortable life. Sadly, this wouldn’t be the case for long.

Their father became consumed with the idea of working out a scientific “system” to gambling. The obsession lead him to finally sell all he owned and take the money to Monte Carlo, confident that he knew how to win every game. He lost everything he had. He despaired, threw his own sons out on the street and ended his own life. Young Carl was only 15 at the time.

He supported his siblings by selling barometers, sketching portraits, and by acting in the theater, which fascinated him. During the war years, he would undergo several exams for signs of mental illness. These exams, carried out by a military psychiatrist, were traumatic for Mayer and his memories of the psychiatrist were very bitter.

Janowitz and Mayer, who had both endured tragedies in their lives, who were both pacifists, who had both learned to mistrust authority figures, became friends in Berlin. Their discussions began to circle endlessly around the events that haunted them–Janowitz’s near-witness of Gertrude’s murder and Meyer’s mental battles with the psychiatrist. After these talks they would go for evening walks, ending up at a colorful street fair on the nearby Kantstrasse.

At some point they began discussing film–that exciting new art form among all the modern art around at the time. Janowitz was a big fan of filmmaker Paul Wegener, who had made the dark The Student of Prague (1913) and The Golem (1915). Film had potential, they agreed. You could show any idea on the screen, perhaps even a revolutionary one. Yes, especially a revolutionary one.

And one night all these earnest discussions and thoughts and ideas came together at that street fair in Berlin. They saw a sideshow called “Man or Machine,” where a strong man performed while uttering ominous predictions “in a trance.” It was the final bit of inspiration–death, insanity, shadowy figures, and power-mad authorities combined and the first official horror film, The Cabinet of Dr. Caligari, took shape. 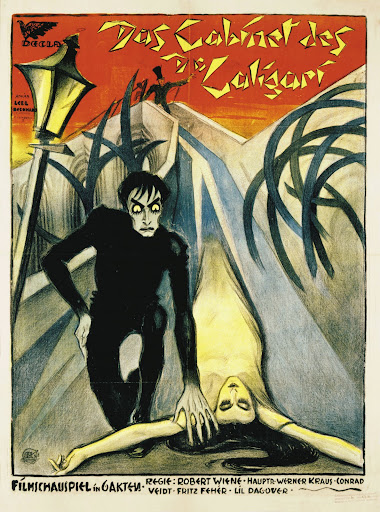 Neither of them had written a screenplay before, but in 6 weeks it was ready to go. They presented it to producer Eric Pommer. While the story goes that he nearly threw them out of his office, he decided to buy Caligari. He even agreed to let its designers go wild with the Expressionist sets.

And as we can see by the result, go wild they did. Janowitz and Mayer were thrilled to see their modern ideas getting the kind of bizarre setting they desired, and Pommer was happy since most of the scenery used just cheap paper and paint.

Watching Caligari, you can see the threads of Janowitz and Mayer’s backstories coming through–the crowded street fair like the ones they had attended, the dire predictions of Cesare similar to the strong man’s act, Caligari as the insane authority training a helpless pawn to murder and kill, a critique on the drafting of soldiers in WWI.

And thanks to those Cubist sets gone amok, there is a sense of unease that you aren’t allowed to forget. Credit must go to the main actors, Werner Krauss, Lil Dagover and Conrad Veidt, for not letting the sets upstage them. Their performances are just stylized enough to work and make you take the film seriously. Veidt in particular had a limited number of scenes, but managed to make his performance iconic.

There’s one aspect of Caligari we haven’t discussed yet–one that gets noticed a lot today. The “bookend scenes.”

“Yes, about that…” you say. “Here I thought the whole point of Caligari was to show the evil of absolute authority. Why would Janowitz and Mayer make the whole thing turn out to be just a crazy guy’s fantasy?”

Well, they didn’t. When the film was nearing release, it was feared that it was too Artsy for its own good, so some “explanatory” scenes were tacked on to the beginning and end. The two writers were appalled. Here they had created Art with a clear purpose, inspired by their own experiences, and the producers went and turned it into “A Film With A Big Twist Ending!” Which is, yes, what gets too much attention today (take a look at the reviews on IMDB).

Janowitz and Mayer were right, in my opinion. Without the bother of a “reasonable” explanation Caligari is all the more haunting. The message holds weight, as the writers had wanted. Plus, if the Expressionism of the film is explained by being a look inside a madman’s mind, why would the bookend scenes be Expressionist too?

Caligari was much discussed back in the ’20s and lauded by critics, especially once it made it to the U.S. Still, it didn’t make that big of a splash at the box office.

People might be tempted to say it simply was ahead of its time. Seems logical, doesn’t it?

Myself, I’m inclined to disagree. Rather, as we’ve seen Caligari was very much of its time. It was deliberately shaped by its time, and perhaps couldn’t have resulted from any other time. When we watch it today, its power still holds. The design still not only amazes…but bewilders, just like it both amazed and bewildered audiences in the early ’20s. It’s no surprise that it’s a landmark in film history–and all from two writers who had never written a screenplay before.

My two most significant sources were: