Have you ever thought about how classic “monster” costumes like Dracula and Frankenstein used to be completely different from the way we imagine them now? The black capes, widow’s peaks, flat heads and neck bolts are so ingrained in us and our Halloween costume aisles that it’s downright impossible to imagine them any other way.

Although at times dark forces have tried to sway us.

But if you had walked up to the average person in the Twenties and showed them a picture of Bela Lugosi in full Dracula regalia, he would probably say “he looks Latin, or something foreign of that sort” and “he’s got that patent leather Valentino hair. Really, I don’t know what the women see in that fellow Valentino. I’d much rather watch Douglas Fairbanks.” (The person you walked up to is an average Twenties man.)

Now, if you showed this average person in the Twenties a picture of Boris Karloff as Frankenstein’s monster, they would really be at a loss. There had been stage adaptations of Mary Shelley’s famous novel in the olden days, and a couple films that we know of, but hardly anything to compare to the 1931 Universal version.

Well…maybe there was one film that stood out, certainly for audiences today. This would be the one-reel drama Frankenstein, produced by Edison Studios during the Edwardian era, featuring a humpbacked monster with wild hair and ragged clothes, thought to be completely lost for a century, and finally located in the possession of an eccentric collector who attended a showing of the film while dressed as Father Time.

Spoilers!  If you’re the sort who desires their 1910 one-reelers to remain unspoiled, add this film to your regular Halloween viewing before reading any further. (It will take up only twelve minutes of your time!)

The film begins with Frankenstein (and of course you already know that Frankenstein was the scientist not the monster) bidding his sweetheart and family goodbye before going off to college. Another title card proclaims, “Two years later, Frankenstein has discovered the mystery of life” (it must’ve been a really, really good college) and we see the young man in his skull-bedecked study, clearly in the highest of spirits.

We see him excitedly mixing chemicals together and adding them to a huge vat in a closet-like structure. He shuts the doors and watches through a window as the contents combine (with some clever effects) to gradually form a human figure. Frankenstein’s excitement is at its peak when he apparently realizes exactly what he’s looking at. Backing away from the structure in horror, the door swings open just enough for an eerily large hand to reach through…

Overcome by fear of his own creation, Frankenstein stumbles away and drops onto his bed. We see the monster’s face for the first time as it emerges from between some curtains. Frankenstein then falls to the floor in a swoon, and the monster withdraws.

Leaving the college and abandoning his “creation,” Frankenstein is happily reunited with his sweetheart. But this peace is short-lived, for the monster has followed him and has grown jealous of the young woman (watch closely as the monster tears off the flowers she put in the buttonhole of Frankenstein’s coat). After terrorizing the couple, the monster regards its own hideousness in a mirror and “the creation of an evil mind is overcome by love and disappears”–quite literally, as the monster and then the monster’s reflection vanish. (Yes, separately.)

It’s old, old films like Frankenstein that can be a real treat for us today. They provide rare glimpses of how early filmmakers translated classic tales before…well, before Hollywood came along and made the defining versions. (Hollywood didn’t really “exist” in 1910, remember–a lot of the filmmaking action was happening on the East coast.) And in our hindsight of decades of monster movies, this little one-reeler made some surprising choices.

Today, we categorize the Frankenstein story as a “mad scientist” tale with an emphasis on the “science,” so films dwell on your typical mad scientist equipment–bubbling flasks, buzzing electric coils, and beakers of mysterious liquids. But 1910’s Frankenstein didn’t have any of that (the lab looks more like a Victorian biologist’s cabinet of curiosities). Its main source materials were old stage productions and the original Mary Shelley novel.

Shelley had been inspired by not only by scientific theories but ancient myths, Christian theology, philosophy and works like Milton’s Paradise Lost. So this version, in the spirit of the original novel, gets downright mystical.

The monster is created not just through botched science, but it springs forth from the darkness within Frankenstein himself.

This is a pretty cool idea, if you think about it. In the novel, Frankenstein tries to give his creature “beautiful” features, but is too intent on his work to realize how ugly it actually is until it’s too late. The 1910 film provides a more direct explanation of the ugliness that uses just a touch of The Picture of Dorian Gray.

There’s also an almost magical element to the monster’s creation, as we see it slowly fuse together from nothing into a solid human shape (we’ll discuss how these trick shots were done in a minute here). And the magical element is even stronger in the last scenes of the film, where the monster confronts itself in the mirror and disappears, leaving behind just its reflection for Frankenstein to see before even that fades away entirely. Evil in the scientist’s mind created the monster, but love proved so much stronger that the monster could no longer exist–apparently. 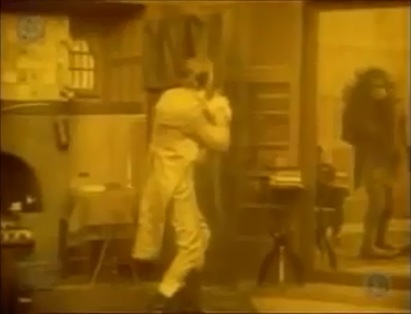 Yes, there’s the typical “stagey” acting and settings and the motionless camera, but there’s some innovations too. One is the “creation” sequence, an unsettling standout. Its secret is a little obvious if you watch closely: they made a dummy of the monster figure (with a skeleton inside!), set it on fire, filmed it burning away and then reversed the footage to make it seem like the creature was slowly generating via unholy means. Prints of Frankenstein are very blurry, so unfortunately we can’t see all its creepy detail. But even with the haze of corroded nitrate, this ingenious scene is unique enough to deserve the status of “classic.”

There’s also the beautifully lit shot where Frankenstein collapses on his bed and the monster hovers over him like a specter. It’s the visual representation of a thousand nightmares–and in fact, looks more than a little bit like John Henry Fuseli’s famous painting The Nightmare–coincidence? Or perhaps deliberate?

Then there’s the interesting use of the mirror in another scene. It faces a door that’s off camera, showing us what enters the room behind Frankenstein’s back. Our first glimpse of the monster’s entire figure is in this mirror, and so is our last glimpse of it, a creative way of adding some drama.

Of course, we can’t discuss Frankenstein without mentioning the look of the monster itself. The high forehead, pale skin, and darkened eyes and lips of the Universal monster are all there, but the rest is a lot like Shelley’s original description mixed with theater. Its long dark hair is wild as a lion’s mane, the ragged clothing is tied together with cords, and the elongated feet balance out the top-heavy, Quasimodo-ish hunch of the monster’s upper body (I’m wondering if the costume used modified slapshoes). The actor, Charles Ogle, probably created the makeup himself. It’s striking and was probably unlike anything else in films at that time.

Frankenstein had excellent reviews. Moving Picture World said, “The formation of the monster in the cauldron is a piece of photographic work which will rank with the best of its kind. The entire film is one that will create a new impression that the possibilities of the motion picture in reproducing these stories are scarcely realized” (April 1910). But it was only one of many products the Edison studio churned out back then, and it was soon presumed lost.

In the ’70s a print was found in the possession of collector Alois Dettlaff, a near-miracle. Dettlaff however stubbornly held onto the print until at last writer Frederick C. Weibel convinced him to let the film be restored.

And thus it was that in 2010, 100 years since it first ran in theaters, Frankenstein lived again (this time on DVD!).

Thanks to Weibel, and I guess to Mr. Dettlaff too, both horror fans and classic film fans alike can enjoy this peek at a genuine Edwardian era monster movie. It’s a great piece of film history and happily was saved from the vast grave of “films presumed lost.”

Sources: Most of our knowledge on Frankenstein comes from Weibel’s hard work. He even wrote a book on the work, Edison’s Frankenstein. I found the following two articles particularly interesting: