But something about the story, with its Tess of the d’Urbervilles-inspired telling of the innocent woman seduced by a womanizer, had appealed to Griffith. He usually gets talked about today for his extravaganzas like Intolerance and some potboiler you might’ve heard of called The Birth of a Nation (I once heard that it was racist), but Griffith was perhaps at his best when making smaller, character-based stories and “rural dramas” like True Heart Susie.

Rural dramas in particular, based on the life he had known while growing up on a farm in Kentucky, were made with the kind of affection and heart that’s scarce in his more serious work. Way Down East presented a chance to have a little of everything Griffith liked to film–drama, rural settings, an epic climax, and a character-driven conflict that could tie into a “universal theme.” 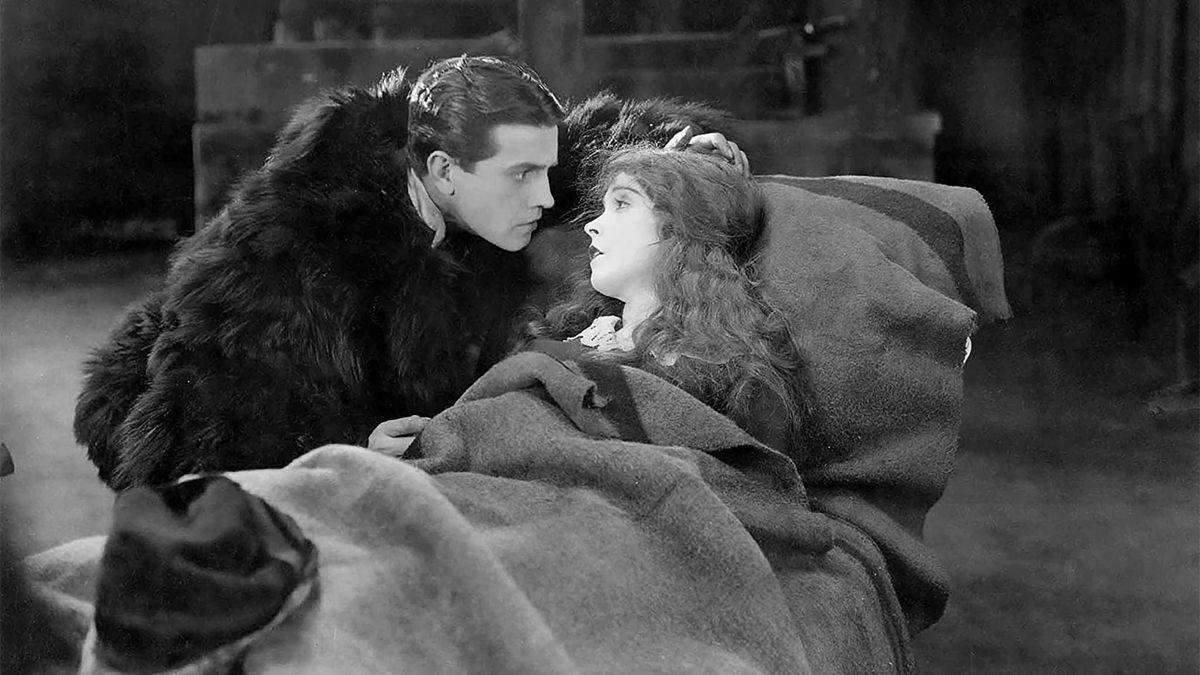 The film begins with title cards floridly describing the moral point of the film: “Since the beginning of time man has been polygamous…but the Son of Man gave a new thought, and the world is growing nearer the true ideal. He gave of One Man for One Woman.” The broad language–the capitalized “One Woman,” the Biblical references and such–make it clear that Griffith wants us to think of the film as a kind of Morality Epic, if you will.

Lillian Gish plays Anna, an innocent maiden who lives with her mother in the country. Being down on their luck, the mother decides to send Anna to visit her rich socialite cousins and ask them for financial help.

Her cousins, of course, look askance at the naive and unfashionable Anna, but she catches the eye (make that the ever-roving eye) of Lennox Sanderson, described as “a dashing interloper in Society” who “has three Specialities–ladies–Ladies–and LADIES.”

It doesn’t take long for snakey Sanderson to start pursuing Anna, who is flattered by this gentleman’s oh-so-charming wiles and starts to fall for him. Willing to do anything to have his way with the beautiful girl, Sanderson arranges a mock marriage ceremony and then tells her to keep their union “secret” for awhile.

As you might expect, it doesn’t take long for Sanderson to spill the scandalous beans about the mock marriage to poor Anna and leave to start chasing new skirts…resulting in her being left alone with that one secret that simply can’t stay hidden: pregnancy.

Anna (whose mother passes away rather abruptly offscreen) hides herself away in a small town where she has her child. The baby turn to out to be sickly and dies, and Anna dejectedly wanders until she finds employment as a maid at the idyllic Bartlett farm. There she is able to work for room and board while keeping her past a secret from everyone, even from the handsome young David Bartlett who falls in love with her…

…but of course Sanderson has to show up again, and Anna’s past has to be called into question, and everything leads into a great, thrillingly-shot climax with a real frozen river and a near escape from death. The river sequence is one of the great sequences in film history, keeping you nearly biting your nails with suspense even though you know everything has to end happily.

Gish is, of course, simply luminous, carrying the (long) film with ease. Her Anna progresses from being a sunny innocent to a mature woman gracefully, keeping you rooting for her all the way. Gish was famous for those closeups where you see the emotions coursing through her face, and Way Down East is practically her personal showcase. Consider the scene when Sanderson proposes, and she looks startled that a proposal would be asked of her, but then begins blinking away unconscious giddy tears. Or the scene where she keeps trying to warm her dying baby’s tiny hands with her breath, holding them to her chest. Or the scene where she realizes with wide-eyed horror that Sanderson is an esteemed friend of the Bartlett’s. Or… I could go on.

There are few actors who could’ve played David Bartlett better than young Richard Barthelmess, who can totally pull off the touchy task of being noble, virtuous, and virile all at the same time. The sincerity of his acting and charisma with the camera keep the role from being overly idealistic–which it easily could’ve been. He and Gish have a beautiful chemistry, well-matched in acting styles (as well as looks, because let’s just face it).

And of course Lowell Sherman’svillainous Sanderson is a major highlight of the film. I’m not even going to try describe him better than humorist S.J. Perelman did: “Exquisitely groomed, a trifle flaccid, the epitome of the jaded roue, he moved catlike through the action, stalking his prey, his face a mask of smiling insincerity that occasionally let slip a barbered sneer…They had to spray him with fungicide between takes to keep the mushrooms from forming on him.”

So this is the point where writers would discuss the “Victorian plot” and talk about the “annoying country bumpkin characters” and so forth. Way Down East is, admittedly, the sort of silent that you can’t describe to people without them snickering. It all sounds suspiciously like melodramatic silliness, all too easy to make fun of. Modern critics tend to be hard on it, praising Gish but otherwise lambasting the film for “rickety conventions of 1890s stage melodrama” and “an irritating moralistic Bible flavor” (as I quote).

But believe it or not, reader, these attitudes are precisely the wrong way to judge Way Down East.

Because, you see, the film knew it was being old-fashioned. That was the point of it–to deliberately appeal to people’s nostalgia for the “good old days” and especially to the fondness for rural life that was starting to disappear. It did this by using the framework of a popular, if creaky Victorian play (an extra heaping of nostalgia for audiences back then), while using popular folk tunes in the film score (very praised at the time), and while utilizing the background of Christian moral teaching for its lofty theme (this being when the church was often the center of village community life). You can still criticize the film for these things if you like, but doing so is a little like criticizing a Western for having too many cowboys in it.

“Yeah, well, it’s still Victorian,” a critic might say (“Victorianism” apparently counts as a strike one). But interestingly enough, if we examine Way Down East we can see where Griffith added a few shades of gray to the story–not something that the very clear-cut, “bad is bad and good is good” Victorian plays tended to do. William K. Everson pointed out in his American Silent Cinema:

But for all its superficially melodramatic trimmings, Way Down East is very much an anti-Victorian film. The reformers and the self-righteous are condemned. The god-fearing but bigoted New Englanders are forced to admit that they are wrong. And the callous seducer turns out to be a rather likable villain after all, despite his zealous exploitation of the double moral standards of the day. Indeed, except for a mild trouncing, he gets away scot-free to practice his moral turpitude elsewhere.

This is all not to say that there aren’t faults in Way Down East, of course. Even in its day (and it was a massive hit) critics were quick to both praise and nitpick the work, especially for its slapstick scenes. “…The bucolic comedy is as commonplace and colorless and trivial as any,” Photoplay griped, and Picture-Play Magazine declared that “The comedy is rough and jars in its tremendous contrast with the beautifully done major action.”

But even the harshest critics recognized that a great deal of sincerity and humanity had been added to the popular stage play–something we modern viewers, far removed from a time when the play Way Down East was part of the fabric of popular culture, don’t realize. A thoughtful review by Motion Picture Classic sums up the general feeling at the time:

The sawdust and the wires become flesh and blood when transferred to the screen under Griffith’s hand, the canvas trees and calcium-lights transform to vast sweeps of landscape alive with summer sunshine, and torn paper to a bleak and whirling winter blizzard. “Way Down East” gains vastly upon its transfer from stage to film form, for the director endows his characters with a humanness they never possessed behind the footlights. Doubtless this desire to breath life into a well-known play was a factor in Griffith’s unusual choice of Way Down East to begin with. But there was another huge factor as well, which in his mind justified the enormous sum of $175,000 he had paid for the rights to Way Down East (twice the entire budget of The Birth of a Nation). This sum was much discussed and exclaimed over in the press, but Griffith remained unruffled. As he explained in an article for Picture-Play Magazine:

While $175,000 is in itself a small fortune…it is the least significant feature in connection with my desire to immortalize this classic of the American stage, to immortalize it in so far as immortality can be established by the motion picture.

As the years pass by, there is a phase of American life that is rapidly disappearing. In but a very few years now we will have passed beyond that most delightful “rural America” which, even to-day, is but a remnant of what it used to be in our grandfather’s time. The passing of “Old Dobbin” and the one-horse shay in favor of the more modern motor car is removing one of the most treasured of American customs. In but a few years there will be no “Way Down East” and “Way Down South,” no deep-tangled wildwood and no old oaken bucket. Instead, we will become quite modernized, and the old log fire will have given place to the electric heater or the old steam radiator. Even to-day the farm hand has about been replaced by machinery, and the milkmaid finds her occupation gone through the introduction of the electrical milking machine, the old oaken bucket has been thrown into the discard, and filtered water runs through modern pipe right into the farmhouse.

Rural life in America is a sacred memory. It should never be forgotten.

For many years I have received innumerable requests for a production that would recreate those “good old days down on the farm.” I believe, in selecting “Way Down East,” I have come upon the most representative story. It will be a work of pleasure and love to place it upon the screen, and for the realization of that opportunity the cost does not matter.