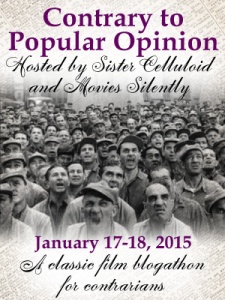 This post was written especially for the Contrary to Popular Opinion blogathon, hosted by Sister Celluloid with the help of Movies Silently. This ‘thon is all about unpopular opinions–maybe one blogger thinks a reviled film is a secret classic, or maybe another feels that a critically-acclaimed masterpiece is overrated. Whatever the case, we’re sharing our opinions this weekend and I thank you for stopping by to check out mine!

The young woman sits quietly in court, wearing a fetching black mourning dress and veil, as her lawyer provides a rousing defense of her innocence in the sudden death of her husband. She thanks him with an attractive smile as he–rather familiarly–kisses her hand. The prosecutor rises, a serious man of the law, and begins to deliver his damning speech: “Your honors. Members of the jury. The Greek gods created a woman: Pandora. She was beautiful, charming, versed in the art of flattery…but the gods also gave her a box containing the evils of the world…” From across the room he catches the eye of the woman he’s condemning. She smiles slowly, beguilingly. Serious Man of the Law stops, too charmed for a moment to go on.

This scene, which would be dismissed as pure hokum in almost any other context, is from none other than Pandora’s Box (1929), the much-lauded drama by G.W. Pabst starring legendary Louise Brooks. Centering around the travails of a young woman who charms every man she meets and whose free nature (or selfishness?) ultimately leads to her downfall, this film receives heaps of praise and adulation in film-loving circles. In fact, I’ve come across more than one person who feels it’s nothing less than the greatest silent ever made.

I’ve noticed that discussions of Pandora’s Box invariably center on two things: the great performance of Louise Brooks and how well the film was made. Those points come up time and time again. Certainly it’s an impressive-looking film, with sophisticated setups and exquisite lighting. It’s easy to be drawn into Pandora’s Box just for this reason. And since the style shares similarities with the very-familiar film noir genre it can also attract film lovers who don’t otherwise watch a lot of silents. (The great condition the film survives in is also a plus.)

And it’s not hard to see why Brooks’s performance is considered such a milestone. She had a quality that could almost be described as introspective, except that it’s never that self-conscious. Critics will note the unusual choices in her acting that only she could pull off–of the scene where her husband is accidentally shot, Roger Ebert stated: “She seems to be standing outside her own life, watching it happen.” And, of course, her beauty and edgy hairstyle look was enough to make her an icon in the first place.

But take away Brooks from Pandora’s Box, and what are we left with?

A dark, slow, long (oh, so very long) film full of unlikable characters with a bleak moral outlook. Go even further and take away the cinematography, and you have a film that even a hardcore cinema fan would have a hard time sitting through. 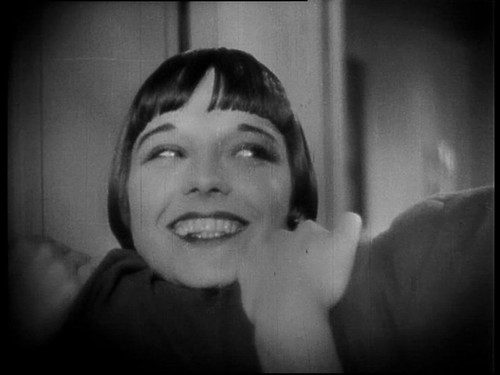 After all, Lulu is charming but she freely takes advantage of men, and often–manipulating them and blithely claiming them for herself. Lulu is frequently described as having an “innocent” or unwitting quality. I would argue that this is due to Brooks’s charisma, probably not to the worldly-wise Lulu herself. Pabst chose her as the lead for a good reason (instead of someone who comes across as more “streetwise” like Marlene Dietrich).

But we might forget that Brooks doesn’t shy away from the darkest side of her character, too. Consider the look on her face when she and her engaged “patron” are caught in an embrace by the patron’s fiancee. There isn’t even a particle of shame–only a chilling, smug triumph.

Lulu is, to be honest, not the kind of gal most women could be around for very long. I’m not talking about cattiness over looks, now–but something deeper than that. Notice how Lulu always interacts with men, all of whom are invariably attracted to her. The only woman she seems to be friends with is a lesbian who is also attracted to her (and is possibly more than a friend). She seems to have no interest in female friendships, only in what she receives from admiring lovers. There’s a wall between her and other women.

You might be saying at this point: “Ah, but all this talk about how you’re supposed to feel about Lulu is silly. Pabst wants us to regard these characters for who they are, not necessarily to judge them or learn from them one way or another. Your silly opinions are wrought with silliness.” I can’t really disagree with how Pabst handles his characters, he did after all have a pretty distinct style. But in my opinion it still begs the question: would Pandora’s Box still be a great film if a lesser actress was the star? Would we be watching it so much today?

The end of the film (I am discussing spoilers by the way) has Lulu and her companions living in Dickensian conditions in a cold London garret. She decides to streetwalk to get much-needed cash–one companion happily encourages her–and she unknowingly picks up a serial killer. He’s honest with her, saying he has no money. She decides to invite him to her room anyway: “I like you,” she says. This would add a vaguely merciful side to her character if it weren’t so oddly naive. But Pabst’s Lulu could hardly get away with a happy ending after all her manipulations–and into the arms of a serial killer she goes. (End spoilers.)

And again–what are we supposed to take away from the story of Lulu? Are we sad that this woman’s free lifestyle is eventually cut short by a man, thus making her a tragic victim? After all, “victim” is a mighty difficult status to swallow–this is a woman involved with a father and son simultaneously who flirts with a prosecutor while being tried for murder, after all. Or are we supposed to feel that she’s “gotten what’s coming to her,” even when we recall how she loved “living in the moment”? Somewhere, Pabst is probably filled with glee at all these questions.

But it does seem to me that the real cult of the long and gritty Pandora’s Box is actually the cult of Louise Brooks. 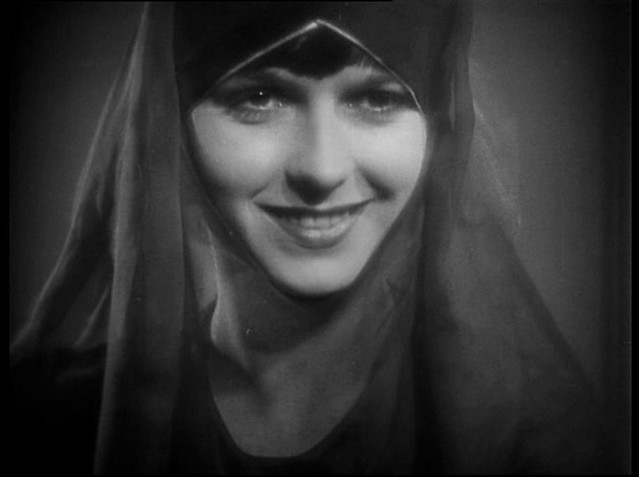 24 thoughts on “Contrary to Popular Opinion: Thoughts on “Pandora’s Box””