One question that pops up now and then among silent comedy fans–on message boards, in Facebooks groups, or even in those old-fashioned face-to-face conversations–is the following: “Were Charlie Chaplin and Buster Keaton rivals?”

It seems like a straightforward thing to ask. Were these two famous, brilliant comedians in active competition to top each other’s films throughout the 1920s? If those Chaplin vs. Keaton fan arguments are any indication, the logical answer must be “yes.”

An artist’s representation. (By the uber-talented Damian Blake.)

But the answer is…naw. Not exactly. At least, not in the way you’re thinking. Maybe a little bit. Perhaps informally, in a friendly manner. But not quite exactly, no.

Sorry, that was frustratingly unspecific.

I suspect folks believe this because not everyone knows the full context of the silent era, or how many other comedians there were besides the Big Three of Chaplin, Keaton and Lloyd. Let’s remedy that!

Back in 1914 former British music hall performer Charlie Chaplin joined the Keystone Film Company as a member of its famous stock company. He wasn’t terribly enthusiastic about films but fondly thought they might help his stage career. He swiftly learned the ropes of “picture” acting, created his signature Little Tramp character, began directing his own shorts, and even did his duty as a Keystone Kop. By the end of 1914, Chaplin was Keystone’s biggest draw and one of the most popular comedians in films. 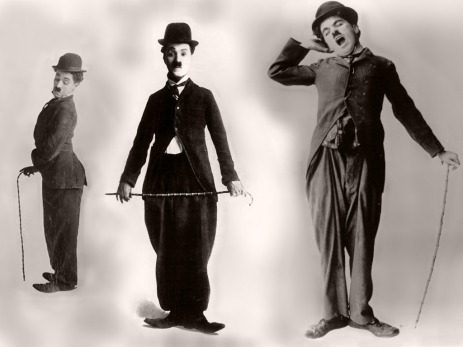 Notice how I said one of the most popular comedians. Who were the others? The kings of film comedy at the time were probably the top-hatted Max Linder and tubby John Bunny. Other big names in 1914 included Mabel Normand, Roscoe Arbuckle, Ford Sterling, Fay Tincher, and Mr. and Mrs. Sidney Drew. 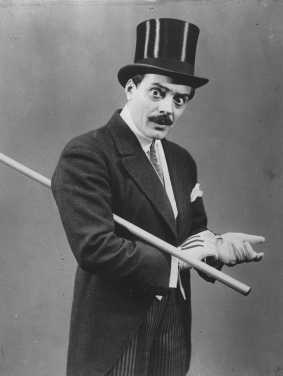 After leaving Keystone for Essanay, and then leaving Essanay for the freedom (and record-setting salary) of Mutual, Chaplin’s popularity only skyrocketed further. By 1916 he was not only one of the most popular film comedians but one of the most popular film actors on the planet–period. The public couldn’t get enough of the little man with the square mustache and funny walk.

Pretty soon, even the intelligentsia couldn’t get enough of him. Significantly, in 1916 an article was published in Harper’s Weekly by stage star Minnie Fiske which proclaimed that Chaplin was a “genius” and (most significantly) an “artist.” Fiske grandly explained: “Chaplin is vulgar…[but] there is vulgarity in the comedies of Aristophanes, and those of Plautus and Terence and the Elizabethans, not excluding Shakespeare.” A comedian, being compared to Shakespeare? It was mind-blowing! Everyone started to look at him twice. And thus the moniker of “artist” (to say nothing of “genius”) has stuck to Charlie like Superglue ever since.

To say nothing of “pathos.”

The comedy film world was experiencing some changes by 1916, too. John Bunny had died the previous year and Max Linder was absent from the screen since he was recovering from severe injuries he had gotten in World War I. Chaplin’s closest rival at the time was the laughing, quick-thinking Roscoe Arbuckle. However, his King of Comedy crown was firmly in place and would arguably never get knocked off (keep this in mind!).

And now we come to the year 1917, a mighty important year, as we shall see. New comedians were on the scene and drawing followings of their own: slapstick queen Alice Howell, zany Larry Semon, and some guy named Harold Lloyd (who had finally developed his “glasses” character). There were oddball clowns like Musty Suffer and cross-eyed Ben Turpin. Max Linder was back, although his career was on the decline. And Roscoe Arbuckle had his own studio, Comique, which was creating hit after glorious hit.

There are a whole multitude of reasons why the Comiques were so popular, and one of those reasons was the presence of former vaudevillian Buster Keaton. Keaton was fresh off the stage when he joined Arbuckle’s company, which included seasoned film performers like spunky Alice Lake and the whirling dervish Al St. John. According to his own reminiscing, as soon as Keaton got acquainted with the movie camera he never looked back.

Audiences and critics loved the supporting player’s antics onscreen. One review called him “the inimitable” Keaton, “whose pantomime and amazing falls…have made him famous.” Another writer called him “one of the brightest lights in the Paramount-Arbuckle comedies.” While he was serving in WWI Keaton was missed–and as soon as he came home he was given lucrative offers for his own film studio (he loyally stuck with Arbuckle).

Keaton was still one of a multitude of supporting players in comedies at the time, but he definitely had the advantage of acting alongside the #2 comedian on earth (who was more than happy to teach him everything about making films).

As Keaton was getting noticed in films, Chaplin was still sailing along. By 1920 there had been look-alike contests and merchandise galore. Other notable comic stars vying for a few of Chaplin’s fans were all-American types like Douglas MacLean and Johnny Hines, as well as clownish types like Al St. John and Snub Pollard. Little Sunshine Sammy was working through his long-term contract (he was not only a child actor but perhaps the only black silent comedy star). Alice Howell, Mabel Normand and Louise Fazenda were the main funny ladies. Larry Semon and Harold Lloyd were becoming massively popular, but this just meant they were coming close to the popularity Chaplin already enjoyed. 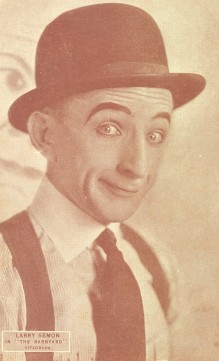 And in 1920 another official comic rival came on the scene…Keaton, who had inherited Comique with Arbuckle’s very strong support. His first released short, One Week, was a revelation. The now “deadpan” comedian’s shorts were such hits that they were listed above the titles of the features movie theaters were showing. 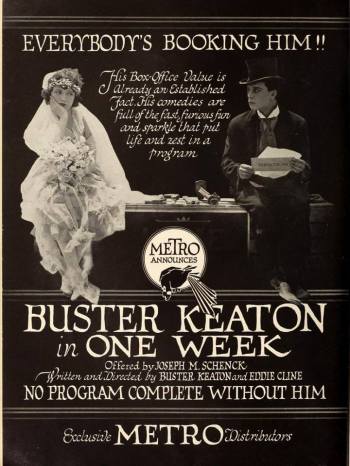 And now we come to the ’20s. Up until then Chaplin’s films always been blockbusters but a few had less than stellar reviews (like Sunnyside). That all changed in 1921 with his touching feature The Kid. Chaplin had been called an artist regularly since 1916, but after The Kid everyone under the sun was calling him an artist. He would make comparatively few movies after this, but that was alright: he was now a legend in his own time.

Another thing changed in 1921: chief rival Arbuckle was unfortunately out of the (film) picture. After the famous Labor Day weekend scandal and resulting trials, his films were banned from the screen (despite his innocence). This unhappy event left the way open for Harold Lloyd and Larry Semon to become the top comedians behind Chaplin.

Lloyd’s many excellent comedies in particular would completely own the box office throughout the 1920s. He would be one of the top 10 stars of the decade–not just one of the top comedians, but top stars. Semon’s zany work would start to decline in the mid-20s, and he would pass away in 1928. Max Linder, once King of Comedy himself, would lose his battle with depression in 1925. The next big comedian to skyrocket in popularity would be Harry Langdon, who popped up in the mid-20s and delighted everyone with his “Little Elf” character. And by the late ’20s Laurel and Hardy were teamed up, to priceless effect.

And what about Buster? Well, if Chaplin was a lofty and untouchable #1 in the comedy world, and Lloyd was a solid #2, at the head of the pack of clowns vying for #3 was Keaton. He had savvily transitioned from making popular shorts to popular features in 1923. Some of his biggest hits back then were The Navigator (1924) and Battling Butler (1926), very 1920s-friendly films.

You’ll often hear well-meaning fans sigh that Keaton wasn’t that popular in the silent era, because out of the Big Three of Silent Comedy his films had the smallest box office. However, I’m going to strongly urge you keep this doleful view of history from clouding your view of Keaton’s importance.

Comparing Keaton’s box office to Chaplin’s and Lloyd’s isn’t quite fair–in fact, it’s downright silly. As we’ve established, Chaplin was the King of Comedy on a scale that’s hard for us to grasp today. Complaining that Buster didn’t make as many dollars and cents as Chaplin is like complaining that a distinguished Senator just isn’t President of the United States. Or that a cardinal isn’t the Pope.

Because of this disparity in status, Keaton couldn’t be Chaplin’s rival in any technical sense. Lloyd, or, Mr. Blockbuster, is the closest thing we have (if Chaplin was President then Lloyd was definitely Vice President). However, being the #3 comedian in films was a massive achievement considering how much competition there was at the time. There were dozens of comedians, dozens of popular film series, and new stars being added to the marquees all the time. That Keaton could draw a consistent, loyal audience throughout the ’20s where so many lesser comedians had tried and failed is a testament to his talent.

Interestingly enough, the Big Three of Silent Comedy seems to have been informally in place by the early ’20s. Exhibitors mentioned them causally while discussing their best draws, and audiences talked about them too. Writers regularly acknowledged the names Chaplin, Lloyd and Keaton while analyzing comedy. Favorites like Semon or Hines or Clyde Cook would get mentions at times, and Langdon would take his rightful place on the list eventually, but throughout everything the names of the Big Three did happen to pop up surprisingly often.

Here’s some examples, starting with an exhibitor’s comments:

A mention in a “news and comment” type magazine column:

A letter from a movie fan complaining about the antiquated antics of Leon Errol:

An excerpt from an essay called “What Folks Want to See in Movies”: 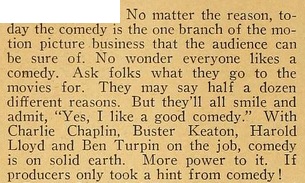 An excerpt from another essay with the fun title of “In the Temples of Tee-Hee”:

Another, reportedly written by a doctor, on “What Makes You Laugh”:

Part of an interview with none other than John Barrymore:

And here’s this wonderful clip from an article extolling the talent of that brand new comic, Harry Langdon:

It’s fascinating to see that while there were, indeed, many popular clowns throughout the 1920s the Big Three were something extra special even then.

To reiterate, during the 1920s Chaplin and Keaton weren’t neck-and-neck rivals, not in the box office sense and not quite in terms of outright stardom. Keaton was below Harold Lloyd on both counts. However, he was still one of the most popular performers in the silent era and was regarded as an excellent comedian in his time–by critics, exhibitors, and viewers alike.

Chaplin and Keaton were also friends offscreen–Keaton once said, “We spoke the same language.” They clearly studied each other’s work, since similar gags would pop up in both their films.

Chaplin visits the Comique set in 1918.

The closest thing they had to a rivalry was a friendly, informal one. In 1960 Interviewer Studs Terkel said to Keaton:

TERKEL: I remember you once told me something about ten years ago, about you and Charlie Chaplin having friendly contests of who could do the feature film with the least amount of subtitles.

KEATON: I think Chaplin won that. One of his pictures [had] something like twenty-one titles, and I had twenty-three.

They may not have been literal rivals, but we fans sure make up for that with our passion now. (I’m team Buster myself.) I might be one of the few who doesn’t really mind those Chaplin vs Keaton debates–as long as the debate is civil and thoughtful, I say shine on, you crazy diamonds.

But if you are ever adding film history to the discussion, let’s try and keep those facts straight. A little context can go a long way…and make our understanding of the era all the richer.

32 thoughts on “Were Chaplin And Keaton Rivals?”