So awhile back, when I was planning a trip to San Francisco with two of my best friends, little did I expect that the dates we chose would just happen to coincide with a very cool event. Which event? Why, nothing less than one of the very best silent film festivals this planet has to offer–the San Francisco Silent Film Festival!

Once I knew this, I just had to go, because A) it was the SFSFF, and B) believe it or not, obsessive-early-film-watching me had never been to a silent film festival before. The closest I ever got were my occasional late night Keystone binges accompanied by cheesy popcorn. (Oh…and my numerous Comique binges. Also accompanied by cheesy popcorn.) I had feverishly sought out any elusive silents that played in theaters near me, but bona fide festivals always seemed to be held on the other side of the country.

Since me and my friends were going to be sight-seeing and creating lasting memories together and all that jazz, I decided to spend only a limited time at the festival. But that would be more than satisfactory.

So I thought long and hard, considered all the showings, considered what me and my friends’ plans were, and chose four showings that were “musts.” Here’s what they were, and here’s how they went:

Showing #1: “The Amazing Charley Bowers”–Musical accompaniment by Serge Bromberg, founder of Lobster Films! Choosing this one was a no brainer.

So on May 31st, Sunday, I got up bright and early, went to Mass at the Mission Dolores (I’m a good little girl), and hurried down the sidewalks of the Castro neighborhood to the theater. I arrived a good 40 minutes before my first film festival showing ever, on a Sunday morning no less, only to be greeted by this: 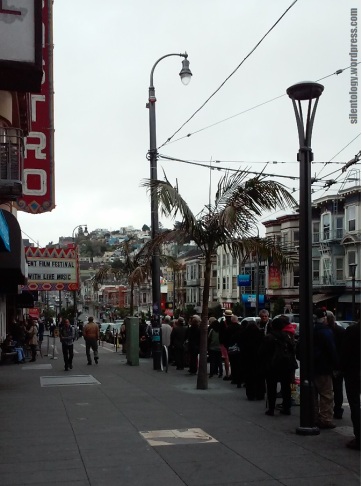 I thought 40 minutes was early…

But, no matter–I was surrounded by kindred spirits! A few people were even wearing ’20s hats. I appreciated it, deeply. The wait to enter the theater didn’t seem long at all, and I scored a nice seat in the middle near the front. After weeks of anticipation I was there to watch…Charley Bowers shorts!

I wasn’t sure I’d ever get to see Bowers on the big screen. He’s so obscure that even many silent fans will say, “Who?” (If you are one of them, Bowers had a comedy series in the mid to late Twenties that featured incredible stop-motion animation and Rube Goldberg-esque inventions. Bowers usually played an eccentric inventor. His work is surreal, zany, and completely charming.) So of course I snapped up my ticket almost as soon as I saw him on the festival website. In fact, if I were forced to choose just one showing the Bowers films might’ve been it!

I wanted to find Serge Bromberg after the showing and give him my regards for the entire MANY A SLIP, but by then I was stuck in the vortex that was the women’s restroom line. Mr. Bromberg, if you ever happen to read this, THANK YOU for the complete MANY A SLIP!!

This one followed the Bowers showing, and I chose it mainly because it featured one of my very favorite silent films: Ménilmontant.

The short Emak-Bakia, directed by Man Ray, played first. Now, if you’re looking for a quintessential 1920s avant-garde cinépoème that features lots of those blurry kaleidoscopic images and no plot or logic of any kind, and will cause people to mildly tell each other “I liked it,” afterwards, Emak-Bakia is your destiny. Man Ray himself stated that “my film was purely optical, made to appeal only to the eyes…” If that all weren’t film festival-y enough, glory of glories, it was presented with one of those modern scores that sounds like a great shrieking mishmash of sound (my complements to the talented Earplay musicians, since practicing that score must’ve been a challenge). I’d say Emak-Bakia is worth watching just for the audience’s reaction to that startling final shot.

Then, the 40-minute Ménilmontant. Yes, Pauline Kael famously called it her favorite film. No, I don’t regard it as one of mine just to be all pretentious.

Ménilmontant is a thing of beauty. It draws upon the familiar melodrama of a young woman seduced and then cast aside, but its modern camerawork and moving acting turns it into a poem. The main actress, Nadia Sbirskaïa, delivers a delicate and vivid performance that stays with you. There was no way I could pass up seeing it on the big screen. It’s a film I will be turning to again and again.

Emak-Bakia I will most likely see again, but only if I go on one of my late night 1920s avant-garde film binges (and you think I’m kidding!).

Showing #3: Why Be Good? (1929) – Accompanied by none other than the marvelous Mont Alto Motion Picture Orchestra.

My third showing in a row! My wonderful friends joined me for this one, partly for the experience and partly to get a little insight on my obsession (they’ve liked everything I’ve shown them so far and cheer me on in said obsession.).

Why Be Good? is a jazzy flapper comedy starring Colleen Moore, one of the Twenties’s most awesome people. Her character, Pert Kelly (adorable) is a spunky young woman who loves to flirt and dance into the wee hours of the morning…all while still being a “good girl” at heart. I thought this would be a fun one for my “newbie” friends, and I was right–they enjoyed the film, enjoyed the live music, and had an all-around great time. Thank you, Colleen!

Showing #4: Ben-Hur – With a recorded soundtrack by Carl Davis, and preceded by conversation between Kevin Brownlow Himself and Serge Bromberg! 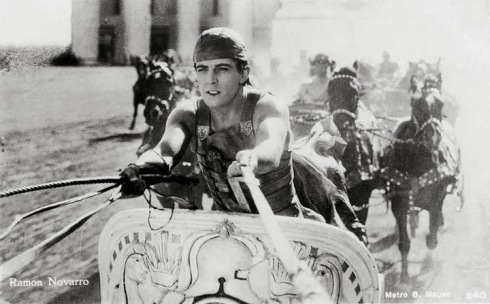 He and Serge chatted about silent films and his experiences in gathering interviews with people like Colleen Moore, and gave a few thoughts on the film vs. digital debate. He was every bit as well-spoken and friendly as you’ve always imagined. 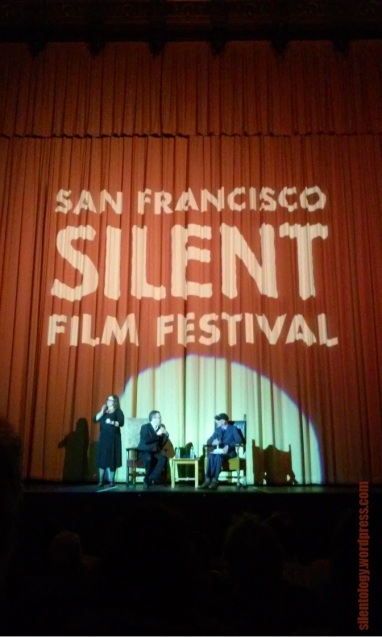 If you haven’t seen Ben-Hur in a theater, you’ve been missing out. The chariot race is exciting enough on the small screen, but on the big screen you’re swept away by the action, the very real sense of danger, and even that shaky cam which absolutely heightens the sense of danger.

The whole theater cheered when Ben-Hur won. That’s one of the best things about festivals, I’ve discovered–everyone cheers at the good parts, and all the main actors get applause when you first see them. Ramon Navarro got a warm welcome. Fewer applauded for the lesser known Francis X. Bushman, but I was one of them. Frankie X needs a little love too, people!

And that was my experience at the San Francisco Silent Film Festival. I hope–no, I cannot wait–to go back again.

So! If you, too, have always dreamed of going to this festival I’m now proud to have this a handy list of tips for you:

Attending the Festival was totally a worthwhile experience, so start saving your pennies and start planning for next year! I hope to see you there!