If you’re already a big silent comedy fan, you might recognize The Knockout as being the one Keystone Walter Kerr used in his beloved book The Silent Clowns to illustrate how supposedly “unfunny” early Sennett films were. (And if you’re just starting to learn about silent comedy, I’m excited to be introducing you to The Knockout!) After describing the plot in some detail (“cowardice and belligerence alternate with indifferent logic through the balance of the twenty-minute film”), Kerr concludes with these observations: “It is probable that, except for an innovative detail here and there, the substance of this’plot’ doesn’t strike you as particularly funny. My point is that it isn’t, not through today’s eyes.” 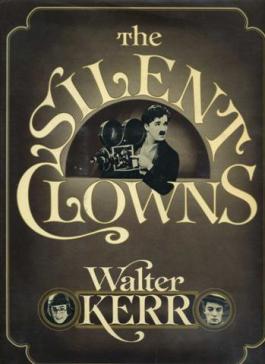 So let it be written.

Walter Kerr, I love your book. The Silent Clowns is one of the most beautifully-written and thoughtful works of film criticism I’ve ever seen. You have inspired me, moved me, and made me think…but I think you’re wrong about The Knockout.

Of the many “action” Keystones, as I’ll call them, the early boxing comedy The Knockout certainly ranks as one of the best. It’s fast and full of slapstick violence but still surprisingly lighthearted. It has a detailed plot and boasts a perfect ensemble cast of many of the Keystone regulars. It has a scene involving two guys throwing bricks at each other. And the cherry on top of this mayhem sundae is one of the best, most quintessential Kops chases of all time.

The film begins (depending on how complete your version is) with two hobos being thrown off a train. Seeing that a boxing match is going on in town, they decide one of them should pretend to be boxer “Cyclone Flynn” in hopes to getting some of that sweet promotional money for a meal.

In the meantime, Roscoe is introduced in a cute shot showing him sharing a snack with his dog Luke. He meets up with his girlfriend, played by Minta Durfee.

Too cute not to GIF.

Then the girlfriend falls prey to an overconfident masher (Al St. John, with his usual rubbery enthusiasm). Roscoe goes medieval on him to the delight of several onlookers. The masher, conceding defeat with no hard feelings, convinces the mighty Roscoe to enter the boxing match against Flynn so they can all win some easy money. 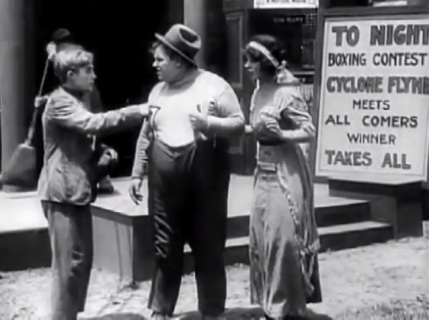 I like how you could probably guess the plot just by looking at this still.

As Roscoe begins training at an athletic club, the hobos spy on him and see him breaking thick chains with his neck and lifting 500 lb weights one-handed. They panic and send him a note from “Flynn,” offering to split the prize money if Roscoe purposely loses. Contemptuous of this besmirching of his honor, Roscoe tears up the note. Then of course the real Cyclone Flynn shows up (played by Edgar “Slow Burn” Kennedy) and the hobos skedaddle.

But not before receiving a thorough butt kickin’.

Just before the match, a hulking, gun-toting cowboy (Mack Swain with what must be the most magnificently long fake mustache of his career) informs Roscoe that he’s bet a gigantic amount of money on him and that he better win “or I’ll kill you.” He proceeds to take a box seat that’s unnervingly close to the ring (which also results in the awkward composition of the boxing match shots, seemingly designed to squeeze Swain in…but, ah well).

I wasn’t kidding about the mustache.

The auditorium fills up with excited boxing fans, including Minta disguised as a boy (boxing matches were a man’s zone back then), Rube Miller giving the most hyperactive of Ford Sterlings a run for his money, and many members of the stock company giving it their all for the camera. The referee (played by Charlie Chaplin, who appears to have guzzled a good two pots of coffee before this scene) runs in–and the match begins!

Fists flail, punches are occasionally landed, and pratfalls ensue, all to the rowdy crowd’s delight. Roscoe sloppily chugs milk between rounds and Al St. John sprays him with it. By the end of the match there’s so much liquid on the floor that the whole company might as well be on a skating rink. Roscoe finds himself fighting the decidedly biased referee almost as often as Flynn, and he finally collapses on the ropes.

Most synopses you find on The Knockout get a bit vague on what happens next, assuming that Roscoe’s pistol-waving mayhem was completely random. But if you watch closely, Roscoe, seeing that he’s lost the match and knowing that his neck is on the line, panics, grabs the MC’s gun and tries to shoot Flynn. Since this is a silent comedy the bullets do considerably less damage than what reading this sentence does to your eyes, but it does lead to mass chaos and a classic chase scene. Kops spill delightfully from a police station door, figures are silhouetted against the sky as they run along rooftops, and an oh-so-polite high society gathering is crashed in the most hilarious way. It’s everything you could hope for when you picture a Keystone comedy. It practically achieves transcendence.

Ah, the poetry to be written on this scene alone…!

Boy oh boy does The Knockout ever get funnier upon repeated viewings. The number of talents involved means that there’s often multiple things going on in the frame, especially once Chaplin bounces in (viewers might be surprised that his part was so small, but he’s simply one of the ensemble here–after all, The Knockout is an Arbuckle vehicle.). Everyone involved seems to be having a ball, from Arbuckle to the actors and extras making up the wildly enthusiastic boxing match audience. You can sense the camaraderie.

I can imagine that some viewers might be tempted to think of The Knockout as being disjointed, with one half being speedier than the other. They might be tempted to argue that it’s merely a lopsided piece of primitive slapstick (Walter Kerr would applaud this). But, as I’ve explained before, these old shorts require rapt attention, more than we give to TV screens nowadays. Watch carefully, and The Knockout will reveal that it’s surprisingly well choreographed. It starts slow (as many good comedies do), establishes the characters’ motivations and the plot, heightens the excitement with some brick-throwing, moves the plot along with some twists, builds up to the “big match,” then tops it all off with an insanely-paced chase finale involving guns firing in all directions (gee, that probably wouldn’t get green-lighted nowadays). Have I mentioned how much I adore the absurdity of the party crashing scene?

…And a single tear dripped down my cheek.

Speaking of that chase scene, let’s take a minute to celebrate the Keystone Kops flailing through the frames in all their helmeted, tailcoated, fake-mustached glory. As I’ve explained before, the Kops weren’t central figures in Keystones but were brought in as a part of climactic chase scenes. But even so, in The Knockout the Kops are everything you’ve dreamed them to be, exploding out of the police station, tumbling over like bowling ball pins, and pratfalling as if the ground were made of glass. Let us contemplate the GIFs:

The more Keystones I watch, the more certain ones start to stand out, and The Knockout is one of them. It’s everything you’d expect from the Fun Factory. Every time I watch it I’m delighted by the amount of effort and ambition involved.

Take a look at The Knockout below! I chose this particular video since it has a nice soundtrack, although I couldn’t be less happy but how the picture has been “stretched.” However, even with the distortion it’s still enjoyable:

My main source for this post, and the others throughout Keystone Month, is Brent Walker’s comprehensive work Mack Sennett’s Fun Factory. It could not be more highly recommended!