If you’re searching for something unusual to watch this spooky time of the year, consider taking a gander at Abel Gance’s experimental short Au Secours! (1924). It was reportedly the result of a bet between Gance, the master of artistic epics, and his friend Max Linder, the debonair French comedian who Chaplin called “the great master.” Linder bet the maker of La Roue that he couldn’t make a film in just three days. (While the ghosts of dozens of early Keystone shorts would laugh, this was mid-Twenties filmmaking we’re talking about.) Well, Gance said “I’ll show you!” and this hallucinogenic oddity is the result. 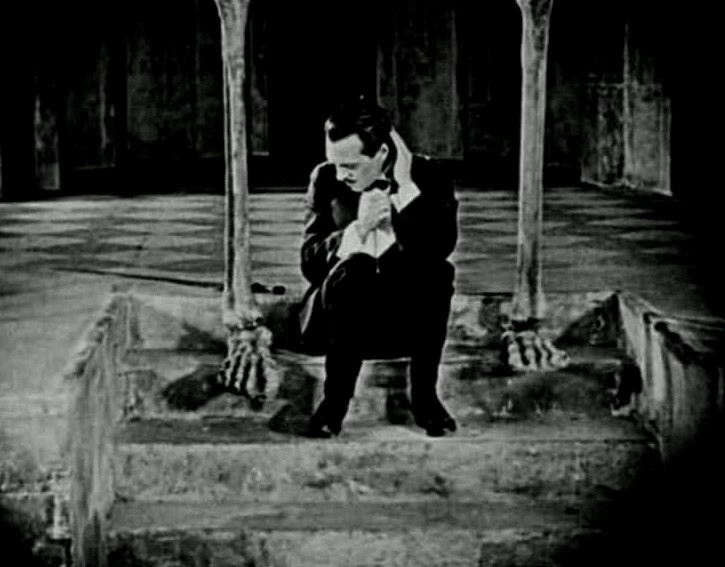 On the surface Au Secours! (which translates to Help!) is a comedy with a typical haunted house scenario. But it’s also something else. Something unsettling. Something that has little to do with the surrealistic touches and mishmash of styles. No, that all pales in comparison to a certain moment in the film that I can’t get out of my brain. I’ll explain.

I can’t discuss this film in detail without talking about *spoilers*, so if you want to watch Au Secours! with fresh eyes you might want to watch it before finishing this post. Here’s a link which includes a soundtrack that meanders between “great” and “urrrrf”:

The plot is also about a bet. Linder, basically playing himself as “Max,” is apparently afraid of nothing. A friend bets him that he can’t stay in a certain haunted castle for a full hour without pressing a button to call for au secours! (The hour ends precisely at midnight.) Max agrees and goes to the castle. The majority of the action there revolves around his encounters with various bizarre terrors: “living” wax figures, creeping snakes, unsettling masks, and a spectacularly tall skeleton ghost (which is pretty awesome).

Getting a little unnerved in spite of himself, Max is repeatedly tempted to push the button but toughs it out. He starts to get cocky as the very last minute before midnight approaches…when a phone rings, and he decides to answer it.

It’s his wife, completely terrified, calling him for help because a tall deformed man is standing over her bed and is about to assault her.

That’s right. Quite a change of pace, isn’t it?

And Max, poor Max, hearing that his loved one is about to be violently attacked, too far away to do anything but helplessly listen as it happens, just about loses his mind. Shaking, tears streaking his cheek, big eyes filled with horror, Linder pulls out dramatic talents we haven’t seen before. It’s uncanny. I honestly found it difficult to watch. And of course Gance insists on closeups throughout it.

Then the clock chimes midnight and the deformed man pulls off his deforming makeup to reveal that it’s only Max’s friend, who staged the whole thing to make Max lose the bet. Bafflingly, the wife does not cry and scream at him and beat him over the head with a pillowcase full of batteries for pulling off this sick joke. In this short, she relaxes and they share a hearty laugh. Yes, she laughs.

In the meantime, of course, poor Max is still enduring the most traumatic moment of his life, so the wife gets on the phone and reassures him that all is well. “Poor little thing, it’s my fault you lost your bet,” she says. The friend chimes in, “Yes, a bet was at stake and so every trick is permitted.” Now, I’m hardly the SJW-type who writes indignant Tumblr posts about “body-shaming”…but truly, a woman would never have casually written scenes like this.

The wife and friend meet Max at the “haunted” house, and Max does not scream and backslap the friend for several hours straight while wearing brass knuckles. The wife says, “If I only knew about the bet, Max, I would have endured any horror for those few moments.” Any…any horror?

The friend reveals that since he can’t rent out the castle, he places bets with people that they can’t win in order to take in income. The sociopath has a real racket going, is what we’re saying here. The couple does not sue him for 10 million dollars and every shirt that’s ever touched his back, but offers to pay up–unless he can wait until the next day. “No I need it immediately. I have to pay all those monsters right away.” And in comes a parade of people in the costumes that creeped out Max earlier. Baaah ha ha!! The End!

This was Gance’s last film before his epic Napoleon, so beloved by a certain Kevin Brownlow. And it was one of Linder’s last–although not the last, as is commonly reported (he would go on to make The King of the Circus and start pre-production on a film called Barkas le fol). It’s worth seeing for its experimental special effects using slo-mo, undercranking, editing, etc. Gance uses some of his famous rapid-montages to show a series of scary faces, and at one point Max dangles from a chandelier that appears to pull down the frame of the film.

There are some interesting similarities with Buster Keaton’s The Haunted House (1921) as well. Like Buster, Max sees a spook in a surprisingly good skeleton costume, sits in an armchair which wraps its “arms” around him, and is scared by a fleet of white-sheet ghosts. I wonder if these were some common haunted house tropes in this era, or if Gance and Linder were directly inspired by Keaton’s short (it’s the occurrence of all three tropes pretty close together in Au Secours! that makes me wonder).

The abrupt change of pace from the silly spook-filled gags and the dramatic horror of the “wife threatening” scenes really makes me scratch my head. The film’s brief production period is probably to blame, of course. You can see those scenes maybe working in a longer, darker, psychological piece. But in a comedy short? Gance, you’ve got some ‘splaining to do.

Gance and Linder on the set.

Au Secours! is worth seeing not just for the special effects, but for Linder. He does his usual fine job with the standard comedy he’s given, but when it came to the drama–not usually his territory–he goes startlingly above and beyond. This is an anguished Max like you’ve never seen him. Admittedly, the sad ending of his life does cast a pall over these scenes. It also might attract viewers with more morbid curiosity than interest in silent era filmmaking techniques.

The popular Linder, who had been making comedies since 1905, had suffered from bouts of depression over the years. Reportedly this stemmed from getting either a severe injury or illness during his service in WWI as a dispatch driver; post-traumatic stress disorder probably played a large role as well. As the Twenties went by his depression worsened, and he started to withdraw from public life. A year after Au Secours! was released, on the morning of October 31, 1925, both Linder and his young wife Hélène ended their own lives in a hotel room in Paris. They left behind a baby girl, Maud.

So it’s hard, you see, to watch Max’s onscreen breakdown with the hindsight we have, even though we know it wasn’t his last film, and even though a year or two passed from the film’s production to his death (a year can be a long time). It’s also hard if you’ve known people who went through similar hardships that Max Linder did.

I do recommend Au Secours! as an unusual film that marries a number of unexpected styles–Gance’s, Linder’s, and the overall trends of silent comedy and silent horror. And I hope you watch it out of some respect for Linder rather than curiosity, since his work had influenced so many, and since he had ultimately suffered so deeply.