When you think of the figures in film history that are household names, several examples spring to mind: directors like Alfred Hitchcock, Steven Spielberg, and Orson Welles, and actors like James Stewart, Marilyn Monroe, and Marlon Brando. How about really early Hollywood names? Well, there’s Charlie Chaplin, you say. And also…well…err, yes, Chaplin.

But if there’s any name that (also) deserves a status in film history as large as the heads on Mount Rushmore, it’s DOUGLAS FAIRBANKS. 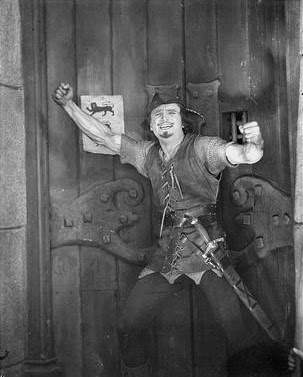 While everyone and their grandmother and their family dog knew Doug’s name back in the silent era, he’s somewhat forgotten today, even though his influence can still be seen in action movies and superhero sagas. But, all is not lost. Happily for silent fans, general movie fans, and Doug himself, the immense accomplishments and pop culture influence of this man are now enshrined in a brand-new biography, The First King of Hollywood: The Life of Douglas Fairbanks by Tracy Goessel.

Goessel’s information-packed Doug Opus (eight years in the making!) covers every stage of his life, from his early childhood to his theatrical career to his triumphant leap onto the big screen to the quiet winding down to his relatively young death. The amount of meticulous, thorough, and scrupulously balanced research is awe-inspiring. She wastes no time in addressing shaky rumors and assumptions–almost every page corrects errors, clarifies misunderstandings, and examines the many tall tales Fairbanks liked to tell about his life. Everything is sourced, and even reminisces from people who worked with him are checked for accuracy (something which doesn’t happen nearly often enough). This book can surely be seen as the last word on Doug. I’m also going to proclaim it as the Gold Standard for all future entertainer biographies. 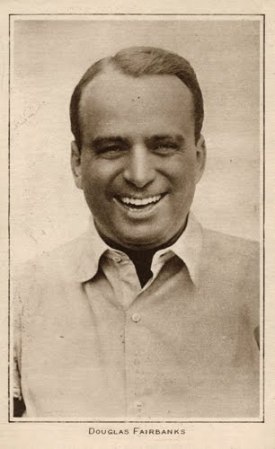 As I’m sure he’d be happy to hear.

Perhaps most intriguingly, we get a detailed look at Fairbanks’s famous relationship with America’s Sweetheart Mary Pickford. Several books have covered their romance, marriage, and divorce in detail, but Goessel’s book tops them all. Not only do we “see” Doug and Mary as real, vivid individuals (something other books often lack), but we even get to “hear” their voices. Thanks to the author’s purchase of their honest-to-gosh love letters at an auction (could a more fitting stroke of fate be imagined?), we get to read of their love affair and subsequent romantic ups and downs with the help of some of their own words.

That, in itself, is delightful enough, but equally of interest is Goessel’s readable writing style. For example: if there’s one thing many silent stars had in common, its those lengthy stage careers. Forgotten plays, popular with audiences now gone and staged in theaters torn down decades ago, now have to be recounted by the biographer in detail–which can be tough for some readers’ attention spans. There’s no such difficulty with Goessel’s writing, which stays breezy as Fairbanks himself and helps us clearly understand the evolution of his style of acting.

You come away from this book feeling like you know Doug, both as a world-famous screen personality and as a man–hardworking above all, impatient and flawed at times, and always crackling with good humor and that energy that never seemed to quit. It’s clear that the movies wouldn’t have been the same without him–and neither would the concept of the All-American Hero that lit up the imaginations of so many of our grandparents and great-grandparents.

Actress Mary Astor later said of him, in a statement very fitting for this buoyant star immortalized in his films: “It was all fun for him…He wasn’t an actor at all. To me, he was an effect; he was a wonderful effect.”

The First King of Hollywood: The Life of Douglas Fairbanks was published by the Chicago Review Press. You can purchase a copy here.

12 thoughts on “Book Review: “The First King of Hollywood: The Life of Douglas Fairbanks””