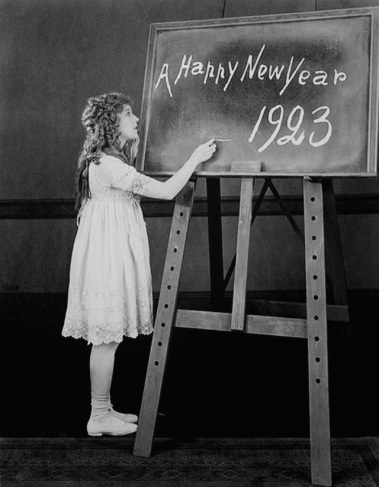 Well, folks, 2015 is coming to a close (I’m a bit sad because, well, 5 is my favorite number and “2015” just looks so right. Yes, that’s a pretty dumb reason to be sad). This means that it’s time for Silent-ology’s annual roundup of all the big silent film-related news from the past 12 months!

I tried to make this list fairly comprehensive, but let me know if I’ve left out any big obvious stories! Here we go:

In January it was announced that The Grim Game (1919), a 5 1/2 reel feature starring the legendary magician Harry Houdini, was discovered in the possession of a collector who had originally gotten it from the Houdini estate way back in 1947. It was restored and shown at this year’s TCM Classic Film Festival.

In March the Alla Nazimova Society made a once-in-a-lifetime discovery: a trunk of costumes used by Nazimova in her films. Included was none other than the iconic “lightbulb” wig used in Salome (1923)! The society must’ve been over the moon. We also know now that the “lightbulbs” were actually shining pearl beads.

In April the restoration of Eyes of the Totem (1926), which was discovered in 2014, was begun and achieved via a successful Kickstarter.

In May archivist Hugh Munro Neely reported that The Stolen Bride (1927), starring Billie Dove and the-best-looking-gent-you’ve-never-heard-of Lloyd Hughes, had been found in the Narodni Filmovy Archive in Prague. The film has since been restored.

Also in May, the restoration of Sherlock Holmes (1916) starring William Gillette (the Sherlock to Edwardian theatergoers) premiered at the San Francisco Silent Film Festival.

In July Mike Grant and his daughter Rachel formally announced the amazing discovery of a cache of rare silents, which had been in a shelving unit that was dumped at a recycling center in Sidmouth, England. Some of the films date to 1909! One of the treasures is The Cardboard Lover (1928) starring Marion Davies. (Prior to the announcement the Grants had posted in several Facebook groups I’m active in, asking if any stills from the films looked familiar–so it was fun to see their story go public!)

In October a cache of rare material from the career of Swedish-accented comedian El Brendel was found, spanning from his vaudeville days and up through his many talkies.

Other news: Eric Grayson, aka Dr. Film, has been painstakingly restoring the serial The King of the Kongo (1929). This was the first serial to use (partial) sound, and Boris Karloff is among its cast.

Roscoe Arbuckle’s feature The Life of the Party (1920) has been restored by historian Paul Gierucki and his CineMuseum team. This will be available on the new Arbuckle Anthology set, due to come out next year.

More great news from Gierucki: An original 16 mm print of a brief film used as part of the 1957 stage production of Merton of the Movies was discovered. Why is this awesome? Because the play starred Buster Keaton, and this little film was apparently the very last one over which he had complete creative control.

On September 4th, the lovely Jean Darling of the Our Gang shorts passed away. She was 93.

Only a few days later on September 7th, another Our Gang veteran passed away: Dickie Moore, who died only a few days shy of his 90th birthday.

Roger Mayer (no relation to L.B.) died at age 89. He was an executive of MGM and Turner Entertainment and a strong advocate of film preservation. Mayer received the Jean Hersholt Humanitarian Award for film preservation work at 2005 Oscars.

One of the most-talked about new books was The Dawn of Technicolor: 1915-1935 by James Layton and David Pierce. It was published by none other than the venerable George Eastman House.

On my must-get list is My First Time in Hollywood: Stories From the Pioneers, Dreamers and Misfits Who Made the Movies by Cari Beauchamp. Sounds like a highly worthwhile and informative read!

Paramount school graduate Thelma Todd got an excellent overview of her life in The Ice Cream Blonde: The Whirlwind Life and Mysterious Death of Screwball Comedienne Thelma Todd by Michelle Morgan. Here’s my review!

The authoritative The First King of Hollywood: The Life of Douglas Fairbanks by Tracy Goessel has been receiving much fanfare. I wrote a review of it here.

Ben Model’s Undercrank Productions has been working even more wonders with Kickstarter, releasing The Marcel Perez Collection (along with a companion booklet), The Mishaps of Musty Suffer Vol. 2,  a restoration of my favorite Baby Peggy feature The Family Secret, and Accidentally Preserved Vol. 3.

The highly-regarded Flicker Alley started their MOD (Manufactured On Demand) program, meaning that classics such as The Sheik, Tol’able David, and my favorite, True Heart Susie, are finally available again in good quality at good prices. They also released the French serial The House of Mystery and the Blu-ray/DVD of the Sherlock Holmes restoration.

Grapevine Video has a new slew of silent offerings this year, such as Films of William S. Hart #2, The Student of Prague, Battleship Potemkin, The White Rose and Mantrap.

Kino Lorber has also released some notable silents on Blu-ray/DVD, including The Phantom of the Opera, Diary of a Lost Girl, and my beloved Faust. Kino also held a Kickstarter this year for a new set, Pioneers of African-American Cinema, which should be released next year.

Happily, several silent films were added to the National Film Registry in 2015 (these were formally announced just on December 16th)! They were:

So did you know that you–yes, you!–can actively contribute to the LOC’s film preservation efforts? And without spending a dime or even getting out of your chair?! You can do this by nominating films to be considered for the LOC’s film registry, and you can choose up to 50 culturally/historically significant films per year. Go to this page for more details. There’s quite a few venerable classics that aren’t in the registry yet–The Musketeers of Pig Alley, The Tramp, Seven Chances, The Kid Brother…even Steamboat Bill, Jr. guys. STEAMBOAT BILL, JR. Let’s fix this!!

There’s a new publication out there for silent film fans–The Silent Film Quarterly! The magazine is published by silent enthusiast and historian Charles Epting, and so far has featured writing by the likes of Annette Lloyd and John Bengtson. (And I may be especially excited about the upcoming Spring 2016 issue, for a certain reason… *wink*)

Diana Serra Cary, aka Baby Peggy, aka The World’s Last Surviving Silent Film Star, was on a lot of minds recently when it was revealed that she had been denied funding from the Motion Picture & Television Fund. After a huge outcry from the film community the organization reassessed her situation and decided to let Ms. Cary move into their Country Home campus early next year. Sometimes there are happy endings! In July, the venerable Murnau’s gravesite was vandalized and his skull was stolen. Yes, part of the body of one of our greatest directors is missing, right now, and no one knows where the heck it is or when the heck it’ll be found. JUST THOUGHT I’D THROW THAT OUT THERE.

So those are some of the major news items that silent fans were buzzing about this year. Anything I missed? Anything you’d like to add? Let me know in the comments!