There are certain films I love to watch the most in the late evening when all is quiet, the room is dim, and there’s a couple lit candles in the corner. (I have a slight mania for candles, and their glimmer adds hugely to the atmosphere of a Special Film Experience. Feel free to share in my quirk.) There’s an hour or so to while away until bedtime, a period of peace when your mind is free. And if it isn’t free, maybe a great film can give you an opportunity to let it rest and refresh itself while drinking in that hour or two’s worth of art.

One such piece of art that I like to save for an occasional Special Film Experience is a short masterpiece called Ménilmontant (1926). Maybe a few of you cinephiles recognize the name, since critic Pauline Kael said it was her favorite film. She explained that this obscure, 37-minute French silent directed by the little-known Dimitri Kirsanov had “a lyricism Chaplin could only dream of.” I’ll admit I watched it after reading Kael’s recommendation, and quickly realized that she was right.

It opens with sudden, shocking violence as a couple is murdered with an ax. The use of rapid montage heightens the brutality. Two young sisters, played by Nadia Sibirskaïa and Yolande Beaulieu, are playing out in the countryside when Sibirskaïa discovers what has happened. We never see the bleeding bodies, only a group of people looking downward and three quick, advancing closeups of Sibirskaïa’s shocked face. We will see this story through her sensitive point of view–there are no title cards.

We see the sisters in mourning in the cemetery. We assume the couple was the girls’ parents, although it might be only their father that died, the woman who died with him being a mystery. A hint, perhaps, of something illicit. A symbolic shot of the two sisters walking slowly off together down a country road, flanked by rows of those tall, lean trees you often see in those French Impressionist paintings, uses several dissolve effects and creates a haunting, meditative effect. 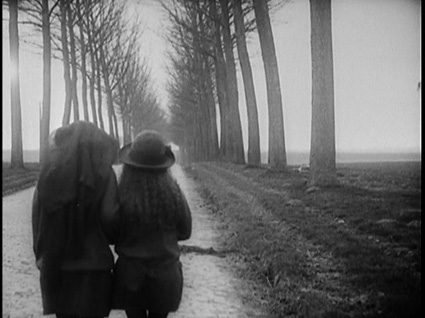 The sisters move to Paris, to the impoverished district of Ménilmontant. They live in an old apartment and earn money by making artificial flowers. Montages of Paris’s bustling life are captured with handheld cameras, giving the story immediacy decades before Hollywood would turn it into a familiar “realism” trope. We have glimpses of people, but they remain distant. In the little, winding cobblestone streets and crumbling stone walls of Ménilmontant it is quieter. Graffiti scratched onto the plaster suggests stories we will never know.

Sibirskaïa’s sweet, girlish character has a boyfriend, a poetic-faced young man who casts long shadows on the ground in one early shot. She is clearly crazy about him, and he clearly knows how to exert his charms. Eventually he coaxes her, longing but hesitant, into spending the night with him. This leads to a presumed estrangement between her and her sister, captured in another montage showing the conflicted thoughts in the mind of Beaulieu’s lonely character.

The dalliance (perhaps the first of several) ends with Sibirskaïa’s character having a baby. She becomes homeless, sitting quietly in parks, walking along the Seine. Beaulieu’s character becomes seduced by the same young man (witnessed with horror by Sibirskaïa), although more willingly, and then becomes a prostitute. Everything is shown, nothing is told to us outright, and we’re left to try and fill in the gaps as much as Kirsanov allows. We understand the story, get glimpses into the characters’ minds, but there are pieces of the story only they can fully know. The film ends with another violent scene, but there is also reconciliation and hope.

There is a great deal to study in Ménilmontant, whether its the masterful delvings into the psychology of its main characters or the poetic repetition of certain images. Above all, this film is poetic. We see shots of bare tree branches against winter skies, raw-looking ground, and the actors’ feet walking across cold cobblestones. There’s a subtle connection between both nature and human nature. Kirsanov can tell his tale with a shot as simple as a closeup of Sibirskaïa’s feet descending concrete steps toward the cold waters of the Seine before hesitating as she changes her mind about her fate.

Sibirskaïa’s realistic performance is, quite simply, one of the best you will ever see in a silent film. Her existence is a rebuke to everyone who thinks silent era acting was uniformly hammy. Her affectionate  character is both youthful and poised, and she incorporates little grace notes such as her girlish half-spins on her heel as she flirts with her lover. The finest scene in the film is where she is sitting on a park bench in the cold with her baby, and an old man sharing the bench begins eating his lunch. She realizes how hungry she is and tries to endure it. Then the old man quietly slides some bread and meat to her, and she, terribly moved, accepts it and eats while fighting back tears.

Ménilmontant remains fresh and modern, while still reminding us of distant memories that are a little too faint and quivery to catch all details. I love it for its atmosphere and delicacy, and admire it for its honesty and, strange to say, its refusal to lapse into cynicism. There is brutality and gritty poverty, but there is also hope. People can betray each other, but others can be merciful. There is debris and stained plaster in the alleyways of Ménilmontant, but the early morning sun can still peer in through the gloom. There is more truth here than in other films were everything ends in relentless despair and ugliness. It is timeless, moving, and showcases the very best of early French cinema.

Ménilmontant is available as part of Kino’s Avant-garde: Experimental Cinema of the 1920s and 1930s set. Don’t let the “avant-garde” label distract you from this beautiful piece–unless you already appreciate that genre, of course. It has a gorgeous modern soundtrack that for once actually works, adding to the depth and meditative quality of the Special Film Experience. It’s also on YouTube, as you can see here:

I was delighted to contribute this post on one of my very favorite films to the:

Movie bloggers everywhere are examining both French films and films featuring France as a subject to try and answer the question, “How does a nation see itself, and how do others view that nation?” This is the very first blogathon hosted by Serendipitous Anachronisms, and it has a fantastic turnout! Please take a look at all the other thoughtful posts.

If you’re a first-time reader, thank you so much for visiting Silent-ology–feel more than free to take a look around!