And how is everyone today? I’ve tweaked the ol’ blog banner up there, changing the Impact font to something a little more unique. The serifs are just a tad old-timey, but not too much. Or so I like to think.

Anyhoo! Here’s a marvel from the February 1927 issue of Motion Picture Magazine: actor Lew Cody posing with a door in his house bearing graffiti from just about anyone who was Anyone in Hollywood. Some of the details are hard to make out, and darn that glare, but if WordPress will play nice you should be able to click on it to see it up close: 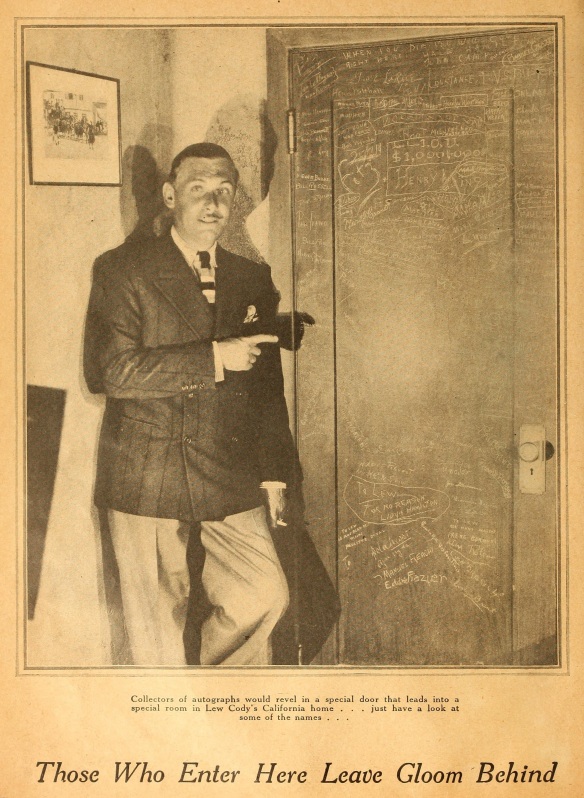 Lew Cody, by the way, was in about 100 films from 1914-1934, for a time specializing in “male vamps.” He was one of the wittiest gents in Hollywood, often in demand as a speaker at social functions. He was also a close friend of  Keaton’s and husband to Mabel Normand from 1926 up until her 1930 death from TB (they may have married on a dare, but don’t take my word for it). He died of a heart attack in 1934. Leaving behind this door.

Geez. I want this door. Whatever happened to it, I wonder? Did it vanish when yet another old Hollywood home was torn down, eventually rotting to nothing in a scrap pile?

Now, I was simply going to post this pic for fun and be done with it, but out of idle curiosity I Googled “Lew Cody door.” Very much to my surprise, up popped a 1930 newspaper article: “Initials On Door Name Lew Cody In Divorce Action.” Well, grease my hair and call me Rudy! 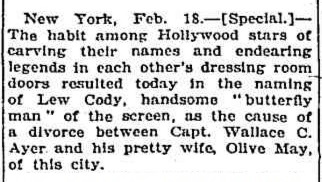 As Capt. Wallace C. Ayer explained it, a few years before (after presumably travelling on business) he visited his wife in Hollywood to see that she had a bunch of expensive clothes and jewelry from an unknown source. Then he heard through the grapevine that his wife and Lew Cody were on quite affectionate terms. 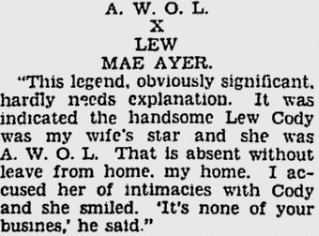 Yup, I did it too–scrolled up, clicked, and scrutinized the photo for that A.W.O.L. Either I’m blind, Captain Wallace had an eye for detail that would make Rembrandt jealous, or there’s a different, clearer photo of it that circulated somewhere. In fact, the latter seems possible–in the January 1927 Motion Picture Magazine, one reader named Sally had written in to the popular Answer Man column with some questions, one being about Cody’s famed door:

I could be wrong, of course, but if curiosity had been piqued about Cody’s door there must have been an image or two circulating at some point in time, unless it was just being mentioned in some of those publicity blurbs (as I call them). At any rate, I CAN’T FIND “A. W. O. L. X LEW MAE AYER.” [UPDATE: One of my fellow bloggers found it, take a look at the comments section!]

And there ya are, folks–what was originally going to be a simple post of a fun image turned out to be a peek into the scandalous lives of (some of) the rich and famous. The More You Know…!

10 thoughts on “The Scandalous Secret of Lew Cody’s Door”