The silent era was rich in many ways, its finest films offering beautiful cinematography and exquisite lighting as well as talented actors and poetic storytelling. It was also supremely unique, preserving an era of history that can never repeat itself. Truly, no art form today can possibly boast an equal wealth of…painted-on eyebrows?

White makeup, darkened lips, heavy black eyeliner–these are some of the more blatantly old-fashioned elements of silent films that can throw modern viewers for a loop. So what was the goal behind early movie stars looking a little more mime than man?

The origins stretch back to the stage era, as you could’ve guessed (and probably did!). But more specifically, it stretches back to the humble gas light.

In the 18th century and earlier, theaters were lit with candles and oil lamps. These softer, glowing lights had charm, but made it necessary for actors to apply heavy makeup to make their features more distinct. (Some of the looks evolved out of stage traditions too–e.g., during the Renaissance era in France farce comedians would sport white faces.) If the makeup happened to be a little thick or slightly crude, no big deal–flattering candlelight hid it beautifully. Chandeliers lighting a stage in 1670.

At least, it did until the advent of the cutting-edge gas light in the early 19th century. Soon gas lights were lighting up that glorious stage as never before–and turning actors’ faces into spotlights. One writer in 1892 described:

Our modern stage system…is opposed to the exhibition of facial expression. There is such a flood of light, and the face is so bathed in effulgence, from above and below, that there is little relief. There are no shadows. The eye is distracted by the general garishness. As it is said, “you cannot see the wood for the trees,” so here you cannot see the face for the light. (Cosmetics and Skin.)

Not only was makeup still essential, but it had to be applied with skill to minimize any flaws that the gas lights could pick out. Actors experimented with powders mixed with different types of grease: lard, suet, tallow, beeswax, lanolin, you name it. Greasy makeup had been around at least since the 18th century (and was sometimes removed with butter!), but now theater folk worked to develop the perfect products for the new era of brightly-lit stages. In 1873 Ludwig Leichner became one of the first to market greasepaint, which came in sticks. Other marketers soon followed suit, making flat sticks, pots, and cardboard tubes of the popular paint. 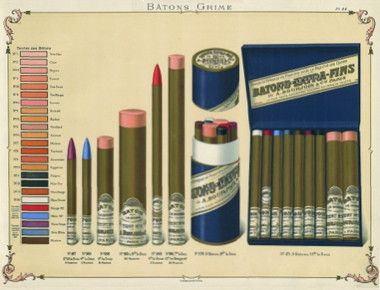 Greasepaint stick and rouge from the 1920s.

By the time the cinema came on the scene in the 1890s and 1900s, actors had been perfecting the use of greasepaint and other liners and powders for decades. But once they started working in “pictures,” they were back to square one.

Early film was orthochromatic, or blue-sensitive. Reds appeared black, light blue appeared white, and so on. Actors’ skin would appear dark gray or dirty, and facial features were less distinct. Flaws were magnified tenfold. On top of that, early studio lighting wasn’t always ideal. Sometimes the sets were open-air, lit by sunlight. Sometimes they used the dreaded klieg lights, which irritated eyes. In all cases, special makeup was needed to “normalize” appearances on screen. (Most actors were expected to apply it themselves.)

Many actors reasoned that since they knew how to apply stage makeup, good “screen make-up” would be a breeze. Not so! One expert advised :

Your charming personality; the sweet things you say to the member of the regular company, or the directors; your perseverance and “pull” avail nothing when the director, his assistants, the cameraman and the laboratory technicians assemble in the dark recesses of the projecting room to view a run of the negative…It might be well to advise the stage professional that his or her pet scheme of makeup for the footlights must be forgotten. Usually a great reluctance is shown. Many stage stars believe in their superior knowledge of what is most suitable for their particular type. Theirs is a sad mistake. (Bernique, 1916, pp. 172-3.)

Thus, early movies display a bit of trial-and-error–some actors plastered on the greasepaint, while others wore just a touch of powder (to the occasional relief of directors). Skin was often lily-white–it not only “normalized” faces but was considered attractive and youthful (at least until Doug Fairbanks Sr. popularized tanning). White chalk was sometimes added to hands, to help them match the faces. Eyes were nearly always lined with kohl to help them stand out. For sensuous temptresses like Theda Bara, heavily lined eyes became a trademark.

By the 1910s makeup was adapting itself to the screen, especially once closeups were involved. It was unique in some ways too–in many Edwardian films it wasn’t unusual to have the main actors heavily made up while extras wore little greasepaint to none, helping the actors stand out.

Some extreme contrast between the two leads and the extra at the right in this still from The Compact (Moving Picture World, 1912)

Bobby Harron is clearly the main character in this 1912 Griffith film. (Behind the scenes still. Source: Cosmetics and Skin).

A whole range of makeup in this still from For a Woman’s Honor (The Film Index, 1910)

What colors were used back in the days of blue-sensitive film? Again, there was quite a bit of trial and error. The face tended to be yellowish, while eyes and eyebrows were black or brown. Rouged cheeks were taboo since they made people look alarmingly gaunt onscreen. Men usually left lips bare, but women applied a bit of red–or brown–lipstick. Theda Bara vividly recalled what it was like to work in such getups: “I shall never forget the terrible experience of my first scene. I had to wear a makeup in the public street and I felt like a lost soul…The whole world seemed to have turned into human eyes.”

Theda’s latter sentence was certainly true. Audiences picked up on the varying qualities of film makeup, and sometimes comments made their way to film magazines. Here’s one sarcastic observation from Moving Picture News, 1911:

Soon there were different tones of greasepaint for men and women, making it easier to appear natural. There was also a range of colors for playing “ethnic” roles, as was common back then. Special powders were designed just for film use. In 1914 Max Factor kindly took a lot of the guesswork out of makeup by releasing his “Supreme Greasepaint,” which came in twelve shades. By the ’20s it would increase to thirty-one. Factor’s product from the early ’30s.

Now, if there were exceptions to the rule of trying to look “natural” onscreen, they were certainly snapped up by the silent comedians. All the crepe mustaches and floppy costumes of the vaudeville stage were carried over to film. Faces glared white, eyes were often heavily-lined, and the painted-on eyebrows were nothing short of luxurious.

The makeup not only screamed “CLOWN,” but went hand-in-hand with “comedy” to early audiences. (I also wonder if any of it was supposed to be lampooning the makeup of serious dramas–satire and exaggeration were comedic staples, after all. Just a thought!) The tradition began to fade by the late ’20s, when it became fashionable for comedians to adopt slick “everyman” appearances. Chaplin was one of the few holdouts, wearing his signature mustache and eyebrows up through the ’30s.

To say nothing of Groucho Marx.

One question might’ve occurred to you: exactly how did your average film actor/actress put on all that grease? Here’s a handy walk-through, courtesy of the methods used around 1916:

How To Apply Silent Film Makeup

A Handy Walk-Through By Silent-ology

Step 1. After first making sure you have plenty of time to apply all this makeup, clean your skin thoroughly with cold cream. Don’t forget your neck and ears! (No skimping.)

Step 2. Apply greasepaint in streaks to your entire face and blend carefully with your fingers so it’s as even as possible (the camera picks up on all imperfections). It needs to coat your skin all the way up to the hairline. Be sure to apply it to the backs of those ears!

Step 3. Add a light layer of yellow powder with a puff. Dust off the excess powder with a brush so that the skin appears smooth and matte. It’s recommended that you repeat this two or three times.

Step 4. Whoa, you look like a ghost! Time to line your eyebrows with black or brown liner–brown is preferred, since it looks more natural.

Step 5. Keep your eyes from looking like creepy white holes (especially if they’re light blue) by applying black, blue, or green eye liner–darkest at your lash line, and lightening as you blend it outward.

Step 6. Your eyes still look kind of creepy–use a lit match to heat up black eyeliner in the tiny pan it came in, then line your eyes.

Step 8. If you’re a woman, add some carmine to your lips (a type of rouge). If you’re a man, leave them bare.

Step 9. Time to fine tune! If you have a dark tooth, paint it with white enamel. Facial imperfections can be minimized with putty or contoured using rouge and white liners–but proceed with caution, as this is expert territory.

Step 10. Go strut your stuff before the camera!

Final Step: When the days’ work is over, apply cold cream and wipe skin clean with a cloth. Get ready to do it all over again tomorrow!

By the 1920s orthochromatic film switched over to panchromatic film, which wasn’t blue-sensitive and registered colors more naturally. Makeup “specialists,” many of whom had started assisting actors with makeup in the late 1910s, were called in to figure out how to adapt the greasepaint to the new film. Studio lighting was improved with incandescent lamps. All in all, makeup started to become more subtle.

In 1937 Max Factor introduced his Pan-Cake makeup, which eliminated the need to add powder. And thus the era of the old, greasepaint-and-powder makeup came to an end.

In these days of expert makeup departments transforming people into everything from Mad Men-era bombshells to Middle Earth orcs, there’s something enduring about an era when actors painstakingly applied their own paints and powders in ramshackle dressing rooms. While the looks they created became dated very quickly, personally, I can’t ever get enough of those painted-on eyebrows.

61 thoughts on “Silent Film Makeup: What Was It Really Like?”