Now this isn’t a book you get to review every day! Technically, the full title is: 1907 Chicago Projecting Co’s Entertainer’s Supplies Catalog No. 122: Deluxe Reprint Edition, since this is the catalog’s first reprinting in over 100 years. Yes, the last time film exhibitors set eyes on this book’s contents was seven years before WWI–back in the era of vaudeville and nickelodeons!

This reprint is the careful work of Darren Nemeth, owner of Giant Squid Audio Lab Company. And we also have his grandmother to thank for getting to read it today: in the 1980s she found one of the very rare original 1907 catalogs in an antique store, and picked it up for Nemeth for a mere $10. A fortunate find for lovers of film history!

Even many cinephiles don’t realize that back before the age of bona fide movie theaters–even back before the nickelodeon boom of the late 1910s–many people were only able to see films through travelling shows. And how did these travelling showmen get their supplies to put on these shows? By ordering from a catalog like the ones put out by the Chicago Projecting Co., of course. This company had ads in many working-class papers like The Saturday Evening Post and Popular Mechanics, designed to appeal to people looking for a “strictly high class” way to make “easy” money that also didn’t require experience. 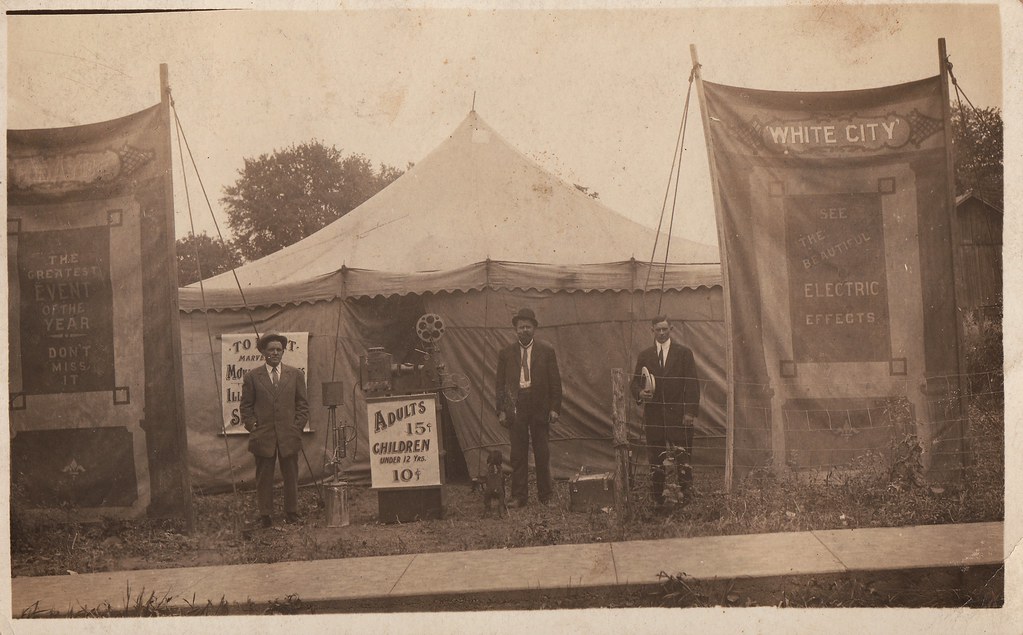 It offered absolutely everything an enterprising showman could need, from stereopticons to magic lantern slides to “motion picture films” to little bottles of 30-cent film cement. (I was amused by one entry for a “Snapper.” As described: “When pressed with the finger it gives a loud click, and may be used by the lecturer to signal the operator for the next slide.” Only a quarter each!)

Every page of this comprehensive, 330-page catalog has been elegantly reproduced by Nemeth, including all the gorgeous engravings for the various types of equipment (oh, those beautiful graphophones and other “talking machines”!).

Perhaps most fascinating of all is the list of over 1,000 films, including descriptions, allowing us to discover exactly what motion pictures were available to some of the earliest of film audiences. There was a bewildering variety of travelogues, funny animals, military drills, Passion Plays, sporting events, cute children, dancers, and of course tons of comedies. Most films were only a few minutes long, and some were only as long as a scene or two. The titles alone are delightful, especially the comedies: Love at Fifty-Five, Poor Old Fido!, Lady Plumpton’s Motor Car, You Will Send Me to Bed, Eh?, Fun on the Levee, How Mike Got the Soap in His Eyes, A Pastry Cook’s Jokes. (Not to mention something like Dogs and Cat, definitely one of the earliest lolcat videos.)

Film history buffs will be excited to stumble across familiar titles such as A Trip to the Moon, Serpentine Dance, and The Whole Damm Family and the Damm Dog.

Also fascinating are the lists of magic lantern slides, in another bewildering variety of subjects. You could buy a series of 52 slides illustrating the Boer War in South Africa–with reading included!–or take your audience on a 80-slide trip around the world “in Eighty Minutes.” Or maybe you wanted to show 50 Wonders of Nature and Art, or take viewers through Dickens’ Old Curiosity Shop slide by slide. The artistic and cultural possibilities were endless! There were also tons of comics slides, basically one-gag pictures with descriptive titles like What’s a Home Without a Mother-in-Law? (These often included humor that hasn’t worn well–such as a slide called The Chinese Question, proclaiming it was “Showing controversy between Chinese Laundryman and an Irish Washerwoman.” Among others that I’d rather not reproduce.)

Nemeth also includes some wonderful supplemental material: Chicago Projecting Co. ads, reproductions of some of those magic lantern slides (my favorite is a gag called A Ghost Adventure), photos of early travelling shows, and an excerpt from the sparingly-titled guide Instructions and General Information for Motion Picture Exhibitors and Stereopticon Lecturers Who Use Enterprise Instruments and Outfits, 1906 Edition. This dispenses wise advice such as:

Do not undertake to go before the public until you are thoroughly familiar with the operation of your outfit and can go through the different operations almost unconsciously…Theatrical people who have been on the stage all their lives practice the new play for weeks and even months in advance, and you certainly should not find it a hardship to practice for at least a few days.

Never say “I can’t” or “I don’t believe I am equal to the undertaking.” Such thoughts should never enter the mind of any man.

Never appear before your audience with your clothes in an untidy condition. Give careful attention to your linen, shave often, keep your hair nicely trimmed, and attend carefully to anything which will add to your personal appearance. The most successful lecturers have been most fastidious in these matters. By this, we do not mean the wearing of jewelry or anything which is gaudy, on the contrary, dress plainly but always neat.

Nemeth’s book is valuable to anyone with a deep interest in film history, both students and educators alike–not to mention collectors specializing in early audio-visual equipment. Silent comedy fans in particular will be fascinated to discover how many film gags date back not just to 1900s films, but to magic lantern slides!

1907 Chicago Projecting Co’s Entertainer’s Supplies Catalog No. 122 is eye-opening, enlightening and just plain fun to leaf through.  And at only $16, it’s available for a refreshingly reasonable price. You can buy it on Nemeth’s site here or purchase it on Amazon.

Note: All images save the sepia photo of the travelling show are credited to Darren Nemeth.