A few years ago I watched the hallowed classic Greed (1924) for the very first time. It was the shortest version, a fuzzy YouTube copy that probably makes Eric von Stroheim spin in his grave every time a viewer clicks on it (spinning while being immaculately dressed in his white Prussian uniform, mind you). And like any cinephile who makes an honest effort to appreciate film history…I liked it. It involved unusual characters. Its plot has interesting twists. It was obviously well-made. It was insanely dark. All in all, I was glad I watched it. I decided to put it on my “future re-watch” list, intending to study its skillfulness a little more at some point.

Now let’s fast-forward a bit to two summers ago. I was in North Carolina visiting friends, and one afternoon we decided to visit a used bookstore (they’re fellow bookworms). I was scanning some of the fiction shelves (okay, after first scrutinizing the few early Hollywood books they had with great concentration) and a familiar word caught my eye: McTeague. Ah! That was the novel that inspired Greed, wasn’t it? It even had a still from the film as its cover art. I almost put it back on the shelf, but it occurred to me that it would be a useful addition to a silentcinephile’s library. And I bought it.

I peeked at it; the writing looked wonderful. And for the rest of the trip, I just couldn’t keep “my book” far from my mind. I read bits of it in the mornings, cracked it open at night after everyone went to bed, and zipped through the chapters on the plane ride home. McTeague had me hooked. And several re-reads later, I’m still in awe of Norris’s detailed Polk Street tale today, right here, right now. It’s a world nearly as vivid to me as the town I’m living in. I’m almost tempted to create a McTeague fan club (we’ll call ourselves the Flying Squirrels! Haw).

Did I mention that I’ve been to this saloon in San Francisco?

So when I re-watched Greed again not long ago–this time the beautiful reconstructed four hour version, which uses surviving stills to piece together the many missing reels–it was a revelation. Here they all were! McTeague! Trina! Grannis! Maria! People I knew! And there it was–Polk Street! The little dental parlor! The gold tooth! It was exhilarating, a rare opportunity to “see” the world that fascinated me so much with my own eyes.

And I admit that now I can completely understand why von Stroheim was compelled to make his film 42 friggin’ reels long–that is, nine and a half straight hours of meticulous footage of the most authentic-looking sets possible. Every piece of the marvelous novel had to be captured. The only parts that Von had to leave out were the periods and commas, presumably with regrets. 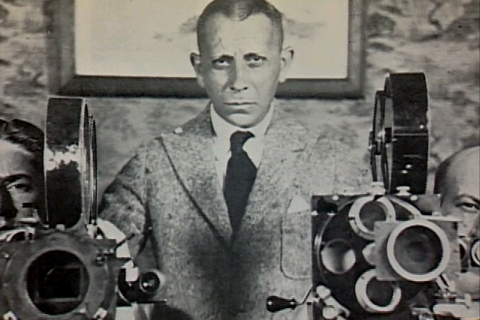 “And still they haunt me.”

It’s easy to see why McTeague had fired Von Stroheim’s imagination. Had Frank Norris still been alive (he died in 1902 at the young age of 32), he and Von probably would’ve been two peas in a pod. One 1920s writer who had known Norris described him as “the handsome, elegant young writer, a romantic at heart, whose strong jaw-line would harden as he talked with unexpected intensity about real life!” Von Stroheim shared that intensity. He was known as the dictatorial foreign-born director who built fortunes’ worth of elaborate sets, driving producers to distraction with his insistence on time-consuming realism. The dark, arresting McTeague appealed to both his sardonic view of human nature and love of grotesquerie. It had to be filmed. And in his feverish need to make Greed feel real,  the sets would have to be nothing less than the living streets of San Francisco itself, as well as the surrounding areas and the sunburned Death Valley. Norris would’ve been beaming.

Reading the stories behind the filming make me continuously nod my head and go “Yes. Yes, Von, I get you.” The 1890s Polk Street that Norris knew had perished in the infamous 1906 earthquake, so Von Stroheim had to search high and low to find similar areas. He was elated to find a Victorian building on the corner of Hayes and Laguna Streets that fit the bill.

It survives to this day.

Drama critic Idwal Johns toured the “sets” before filming began, and was dragged all over the property by von Stroheim, explaining each room with fanboyish intensity: “Right here in the bay window will be McTeague’s dental chair. Just around the corner will be the car conductor’s coffee joint, where the dentist used to gobble up suet pudding and hot meat on a cold plate…And this is Maria Macapa’s room, and the bathroom. Isn’t it remarkable for its deep, tin tub encased in wood, and its high washbasin?” Jones reported later, “Von Stroheim can quote you McTeague from its beginning to end, like a sailor boxing a compass.”

Accurate in every delicious detail.

Von Stroheim took two months to talk to locals, study newspaper files, and get a sense of life in San Francisco. He searched for areas Norris described that were untouched by the earthquake. He hammered the story into the minds of his cast and crew. The film had to be done right, or not at all. Local writer Eleanore Ross visited the sets, and was amazed by the bustle of the movie crew and extras and the details of the recreated Victorian rooms. You can really sense the on-set excitement in her account:

“The confusion in the hall had straightened out a bit, the scene centering around the lottery man, who, with an umbrella as long and gaunt as himself, was rapping on a certain door. ‘He brings the five thousand dollars to Trina,’ said a man near me, ‘and not one cent of it does she give McTeague.’

“It was odd how these people spoke of all the characters in McTeague as if they really lived and breathed. In fact, owing perhaps to von Stroheim’s realism, they do live and breathe. ‘Knock again,’ someone was shouting. ‘Again! Again!’ The door opens; Marcus appears; they talk for a while; the door closes. Yer it must be shot again. ‘Von Stroheim shot a scene twenty-six timesl once,’ I was informed, ‘because it didn’t suit him.’ We watched the whole proceeding take place again and then again. It was growing monotonous. ‘Let’s go and have tea,’ said McTeague at last.

“We followed him along the dirty, narrow, noisy hall, past Prof. Hassan’s suite No. 7, past the dental parlors, in the room back of which McTeague and Trina had set up housekeeping, down the bleak back stairs. ‘My part doesn’t come until the last rays of the sun just touch that church spire,’ confided Gowland-McTeague. ‘It’s a wonder von Stroheim isn’t out here now, yelling that he gave orders for the sun to set hours ago.'”

When I watch Greed now, I’m not only impressed by the sets (yup, there’s that familiar view through the windows of his dental parlor, and there’s the wedding portrait in the McTeagues’ bedroom!) but I’m floored by Von’s casting. It’s flawless. Gibson Gowland was born to be McTeague–he had the build, the looks, the air of dull neutrality that can swiftly morph into rage. Delicate Zasu Pitts is Trina, right down to her “long and narrow” eyes and pale, pale skin. And for Pete’s sake look at Dale Fuller–she owns it as Maria Macapa. I refuse to believe that anyone else could touch the role. And I could say much the same about everyone else.

I’m also chilled by the dark power of certain scenes. Mainly the infamous ones where the drunken, abusive McTeague confronts the miserly Trina who refuses to give him a cent even with their health and happiness at stake. They’re tough enough to experience as words on a page; the screen gives your imagination no chance to skip over any details. You could close your eyes, of course, but that darn human curiosity about the sordid side of life makes you open them up again. Both actors put their rawest, wildest emotions into their performances, and you can imagine Von Stroheim directing them, gleeful over the realism of these scenes. Gowland and Pitts must’ve needed some time to detox.

Film buffs often lament the loss of Greed’s missing reels, chopped away by MGM to get the film down to a “normal” length. I’m right there with them. It’s a gift to us that so many stills survive, but sometimes they’re just taunting us with what’s lost. We’re missing half of the big picture. We lost the twisted interactions between Maria and Zerkow, the chances to see slapstick comedian Frank Hayes show his soft, introspective side as Old Grannis, the black scenes where Trina discovers a murder and then has horror movie-worthy dreams of being haunted by a grinning spirit.

Yes, the full Greed was a numbing 9 1/2 hours long. But here’s the thing. In the age of Netflix, where it’s common for someone to bingewatch an entire season of a show at a time, the prospect of a 9 1/2 hour movie really isn’t as strange as it used to be. And you could always just watch it in two hour increments each night–it could work, people. 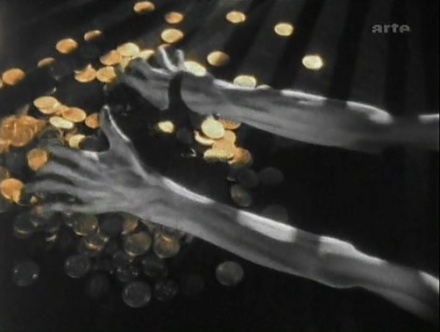 I know it’s a tiresome cliche for someone to glance at a film and then indignantly explain that you have to read the book, because it’s so much better than the movie and will explain everything, don’t even, like, watch the dumb movie, the director totally ruined it. But in this case Greed is art on the level of McTeague, doing homage to McTeague.  And from my real-life experience all I can say is that you have to read it. You just have to. It gives the film a massive boost of life. It explains von Stroheim’s obsession. It should come packaged with the DVDs. I shudder to think of the amount of people who watch Greed but never really “see” it, distracted by scratchy film and missing footage, thinking of it as just another artsy dark drama. People admire it, but without fully caring why.

For von Stroheim, Greed was his masterpiece, his ultimate artistic gift to the world. In a way it was the absolute visual embodiment of Norris’s most famous quote: “I never took off the hat to Fashion and held it out for pennies. I told them the truth. They liked it or they didn’t like it. What had that to do with me? I told them the truth.” You’ll see the “truth” too, once you pick up that fascinating 1899 novel that had gripped von Stroheim and perhaps never fully let him go. 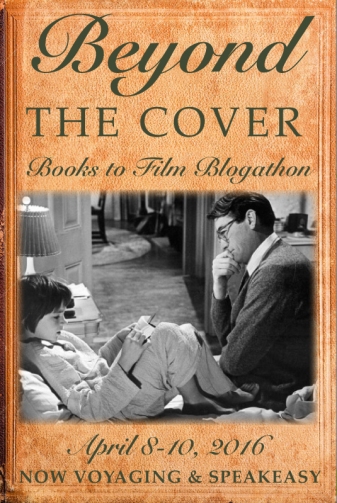 I am thrilled to have this post, on a novel that I obviously kind of like, be a part of the Beyond the Cover: Books to Film blogathon hosted by Speakeasy and Now Voyaging. Thank you for stopping by, blogathon readers! Feel free to look around Silent-ology and make yourselves at home.

There’s a fascinating variety of topics being written about this weekend, and I invite you to check out them all. My hearty thanks to both of the hosts!