It’s pretty common knowledge that director D.W. Griffith, one of the Biggest of all the Big Names of the silent era, was a huge influence on fellow filmmakers. Not only in the technical skills department (contrary to popular myth, he didn’t invent closeups, crosscutting, etc., but he did utilize them wonderfully well), but also in regards to storytelling and popular movie tropes–such as character archetypes.

And decades before Norman Bates and Nurse Ratched, Griffith came up with a respectable variety of screen villains. Some were vicious to the core, while others were granted some complexity. In the action-packed The Massacre (1912), for example, an American Indian tribe is shown attacking a wagon train, but only in retaliation for their men, women and children having been slaughtered by a cavalry unit. On the other hand, in Broken Blossoms (1919), the father is a straight up bully and violent abuser, someone beyond even the tiniest hope of redemption. The level of subtlety largely depended on the story Griffith was trying to tell.

With that in mind, let’s look at some of Griffith’s famous villains and a couple obscure ones. If a few of them seem familiar, it’s because their “descendants” still show up in movies today.

This 107-year-old short, set during the American Revolution, showcases some of Griffith’s earliest, most cartoonish villains. The Hessians–German mercenaries hired by the British–pursue a young American soldier carrying an important letter, who takes refuge in his family’s home. He’s found and shot on the spot, and the family must find a way to smuggle the letter to its destination.

The Hessians are an impersonal gang of cold-blooded brutes, in keeping with the style of familiar old stage melodramas. (The Hessian leader has an honest-to-gosh dark mustache, although it’s partly to signify that he’s German.) They demand to be served at the family’s own table, leer at the two teenaged daughters, and don’t just shoot the young soldier, but shoot him and laugh uproariously at the family’s failed attempt to hide him. They shove the body off to the side (the leader even gives it a kick) and one of the soldiers callously munches on some food while glancing down at it. Yeah, I’m pretty sure that we’re not supposed to root for these guys.

A Corner in Wheat (1909)–The Greedy Wheat Tycoon

Films about social issues were surprisingly common in the 1910s, and Griffith’s work was no exception. In this short drama, a greedy tycoon corners the world’s market in wheat, driving up prices so sky-high that the poor can no longer afford bread. As it turns out, his business in wheat becomes–very literally–the end of him.

The shots of the tycoon at a lavish dinner toasting his friends about his good fortune is contrasted with tableaux of poverty-stricken people standing in a bread line. The satin, tuxes, and flower-filled tables of the rich heighten the worn clothing of the lower class. It’s “show, don’t tell” taken to a very blatant but effective extreme.

We’ve all seen films about “the selfish rich” and “corrupt CEOs” countless times since 1909, but seldom do you see a film end with such an uncompromising punishment of greediness as this one does!  (Eric von Stroheim is probably jealous.)

This gem is the great-grandaddy of gangster films, often credited as being the first to depict organized crime. It set a standard that you’ll recognize instantly from the many classics of the genre–the only thing missing is that fast-talking Depression-era slang.

The “Snapper Kid” (Elmer Booth) is the leader of one of two rival gangs in the New York slums. He crosses paths with a struggling young woman, and, later on, her fiancé. While at a dance, he catches a rival gang member slipping something in the young woman’s drink. Tensions begin to mount, and the two gangs go out to the alley where a shootout occurs.

Booth is wonderful as the Snapper Kid, all swagger and self-assurance, a proto-James Cagney. A closeup of his face as he slinks through the alley seems startlingly modern. The other “musketeers” are equally hardboiled, hats cocked at devil-may-care angles, always on the alert. It’s the future gangster genre in a gritty Edwardian nutshell.

Lynch is the Bad Guy of Griffith’s huge Civil War epic. He’s also a period piece unto himself. The protégé of abolitionist congressman Austin Stoneman, Lynch becomes a lieutenant-governor thanks to a rigged election held during the Reconstruction. He also lusts after Stoneman’s daughter Elsie–it’s awkward.

Also awkward is the fact that Lynch is half-black, and is clearly supposed to be the film’s living embodiment of arguments against racial mixing. Miscegenation was a controversial and much-discussed topic at the time, and The Birth of a Nation‘s position on it is clear. Lynch is scheming, greedy for power, and probably psychopathic. When Elsie Stoneman turns down his proposal of marriage he won’t take no for an answer.  Yeah, we don’t see villains quite like Lynch anymore.

Modern war movies probably wouldn’t treat the “enemy side” as brutally as Hearts of the World did. (One of its posters showed the innocent heroine being flogged by one of the German soldiers.) Although in this case, Griffith was literally commissioned by the British War Office Cinematograph Committee to create a propaganda film that would inspire the U.S. to join in the war against the Kaiser–so he had an excuse.

The German soldiers are little more than thugs, clearly immoral, and, much like the Hessians of nearly a decade earlier, largely impersonal. They become a threat to the heroine’s virtue, in a way that’s shocking for 1918–when one makes his move on her, at one point he plunks down on the floor and gestures for her to join him there. Along with this depiction, violent war scenes show family homes being destroyed and an elderly man blown in half, further cementing our association with The Germans + Everything Horrific. Griffith was uneasy enough about the association to try and atone with Isn’t Life Wonderful? (1924), set in the unhappy conditions in Germany after the war.

If ever there was a villain that any viewer would remember, whether they were familiar with Griffith or not–or heck, whether they were familiar with silent cinema or not–it would be Battling Burrows. Burrows is an oafish prizefighter who’s the father of young Lucy, the brunt of all his pent-up rage. Lucy is a gentle innocent who longs for beauty, but she receives nothing but beatings and harsh words from her brute of a parent. Her life is spent in terror of when “daddy” will return home next.

One of the great scenes in film history is the claustrophobic scene where Lucy, having locked herself in a closet in a last-ditch effort to escape her father’s murderous frenzy, helplessly spins in a circle as Burrows knocks down the door with an ax. It’s nail-bitingly effective today, almost a hundred years later, and can probably count films like The Shining as part of its legacy.

Orphans of the Storm (1921)–Mother Frochard

Orphans of the Storm was Griffith’s epic of the French Revolution, centering on the struggles of two sisters (Lillian and Dorothy Gish) who become separated during the unrest in Paris. Mother Frochard, played by veteran character actress Lucille La Verne, is an old woman who takes in the blind young Louise in order to make her beg in the streets for money. A slovenly, unkempt hag, Frochard is almost gleefully evil. She even has a large wart on her chin. Does she also seem familiar…?

That’s because La Verne was chosen to voice the Evil Queen and her alter ego the Witch in Disney’s Snow White and Seven Dwarves (1937). The animators also used her as a model for the Witch’s looks, especially her intense, expressive eyes. And La Verne’s Witch has been the standard for hag-like villainesses in fairytale films ever since.

The roots of many of our modern baddies can be glimpsed in Griffith’s 100-year-old experimental shorts and ambitious features. Even if he wasn’t the originator of certain archetypes, he certainly knew how to use them in memorable ways. And the more I study the fascinating era of film, the more I’m starting to suspect that just about everything in the cinema is six degrees of separation from D.W. Griffith. 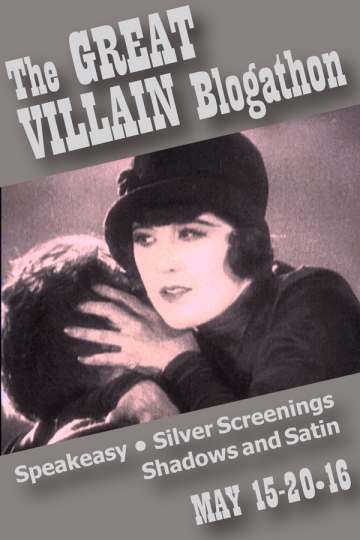 This post comes to you courtesy of the Great Villain Blogathon hosted by Speakeasy, Silver Screenings and Shadows and Satin! Over the next few days classic film bloggers are covering a multitude of villains from Count Dracula to Agent Smith. Thank you so much for stopping by, blogathon readers–feel free to explore!

15 thoughts on “The Villains of D.W. Griffith Films”