In my last post I told y’all about the wonderful experience of going to the SFSFF. Today we’re covering the second leg of the trip to the fun, historic, crazy place called Hollywood. Since I had visited there for the very first time last year, let’s just call this year’s trip “Pilgrimage II to the Holy Land.”

So! The morning of June 6 I said goodbye to San Francisco and took a plane to LAX. Here’s one detail you should know: while at the film festival my body had decided, despite having been bizarrely lucky and only getting sick once the entire previous year, that now, verily, ’twas the time for me to catch a cold. And not just any cold–oh, no! This would be a mighty beast of a cold that would make me lose my voice almost completely while being emerged in a sea of fellow silent film fanatics to talk to. Thanks, BODY.

But, this managed not to spoil my enjoyment of the festival (after all, you get to just sit all day!) and while I was left with a yucky-sounding cough, the journey to Hollywood was happily uneventful. After taking the FlyAway bus to the famous Union Station and riding the very convenient Metro, I was back on Hollywood Boulevard, eager to pick up where I’d left off last year.

This being a simple “hello again, Keystone Kops land!” arrival day, after checking in at the hostel I went for a walk up and down Hollywood Blvd and Vine to look at the Walk of Fame stars, stopped by the Cahuenga alley to imagine Buster performing one of his most famous stunts, hung out at the Grauman’s Egyptian Theatre’s courtyard, and marveled at the impeccable people-watching. (But couldn’t revisit the footprints at Grauman’s Chinese Theatre quite yet, because that World of Warcraft movie was premiering and part of the street was blocked off in front of it.) Seriously, you never know what you’re going to see on Hollywood Blvd–in a surprisingly short amount of time I saw a drag queen, an Amish choir putting on a performance, and a guy dressed as a giant marijuana leaf. It was most delightfully bipolar. 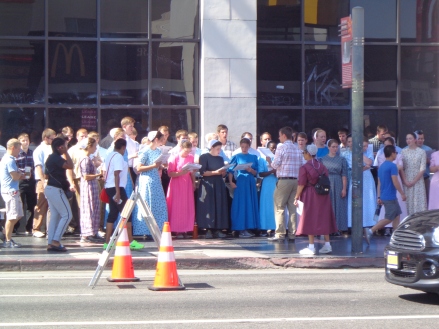 After “sleeping in” a bit because of my cold (meaning “go time” for sight-seeing was at the atrociously late hour of 9:30 a.m.), it was time to book it to the Hollywood Forever cemetery! Last year I’d paid respects to Douglas Fairbanks, Cecil B. DeMille, the Talmadge ladies, Mickey Rooney and several others, and this year it was time to finally visit Rudolph Valentino at a time when that particular mausoleum wasn’t closed.

After stupidly taking the bus a couple stops past the cemetery, I finally arrived and strolled through the beautiful, manicured grounds with their surprisingly thick grass (when you walk, you sink!). Rudy’s mausoleum was open, and–huzzah!–I had the entire place to myself. There it was, the resting place of the Great Lover himself.

After some reflection, it was time to find some people that were missed last year. One was Virginia Rappe–yes, the young actress who died because of what it now known as the “Arbuckle scandal.” If you are well-informed about the infamous scandal you already know that Arbuckle was acquitted and was innocent of ugly charges of rape and murder. Did you also know that Rappe was a smart and savvy fashion designer who surely had no idea that the Labor Day party would result in her death? There’s room for more research when it comes to the much-maligned Virginia.

Anyhoo, I lingered for a bit and decided to tidy up the grave a little too (it was pretty overgrown). How strange it was to see the “1921” date and know what had happened. Here she was.

After this, it was time to finally find Henry B. Walthall (the Biograph star with a long career, perhaps best known as the “Little Colonel” in The Birth of a Nation) and leave him a flower. He was in the largest mausoleum, in a wing that was very bright since it had a glass roof. And it was hot in there. Can’t imagine how it must feel when the L.A. temps soar past 90!

All the walking and being out in the strong sun and super hot mausoleum wings with that obnoxious cold was making me feel pretty wobbly by that point, so I regretfully made an executive decision to take a bus back to the hostel for a rest. Believe you me, if I’m in Hollywoodland and turn down a chance to revisit the site of the Keystone studio in favor of a nap I’m feeling pretty darn sick.

But a long rest definitely helped, and it was time for dinner at the historic Pig ‘n Whistle and some more Walk of Fame star searching. My mom wanted me to take a picture of James Cagney’s star for her, but it must be hiding somewhere obvious because I simply never found it (and yes, I stubbornly like to find them myself rather than just look up the locations online, can you tell?). But there was this nice little tribute taped to the sidewalk near the Beatles’ star: 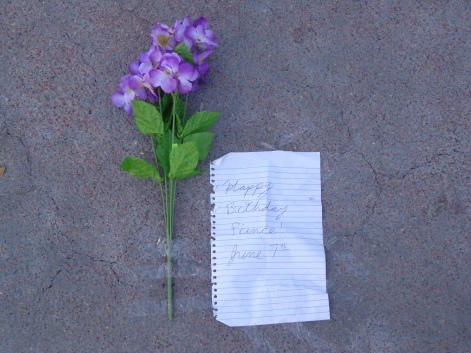 My energy back, it was balls to the wall time. There were sights to be seen and memories to be made, dang it!

After an early breakfast, a brief walk took me to Charlie Chaplin’s former studio (now the Jim Henson studio!), which charmingly looks exactly the same as it did in the silent era. This was a fabulous way to start off a day that included a trip to…Olvera Street! The oldest street in downtown L.A., and the setting of a certain special scene in a Chaplin film…

Now, originally I really really really wanted to visit the Forest Lawn Glendale cemetery, where many stars have their final resting places. Sybil Seely was one star I had hoped to pay my respects to. But after some research, it was clear that short of renting a car (and navigating the L.A. traffic was absolutely not something I wanted to do), it just wouldn’t be possible to visit the overwhelmingly massive Glendale cemetery during this trip. But Olvera Street would turn out to be the perfect plan B.

Getting there from my hostel near Hollywood Blvd was a breeze. I simply walked to the Hollywood/Highland stop of the Metro, took the train to Union Station, walked through the building to the cool, historic part of the Station, headed outside, and across the road there it was: Olvera Street! So easy, my friends. So easy! The old Union Station is simply stunning, by the way–a stately piece of ’30s Art Deco grandeur. It was like a cathedral to classic Hollywood–and in a way it is, considering how many scenes were filmed there. 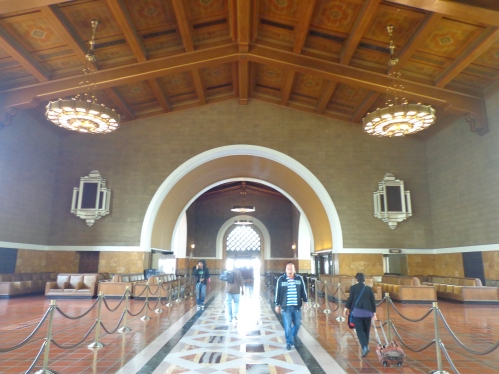 Today Olvera Street is a colorful, charming Mexican marketplace, definitely worth a visit. There’s all kinds of fun souvenirs, and all gloriously inexpensive, too. You can also get equally affordable comida mexicana (my lunch was taquitos). But my visit was mainly to see the exact spot of  what’s arguably Charlie Chaplin’s most touching scene. Look familiar at all? 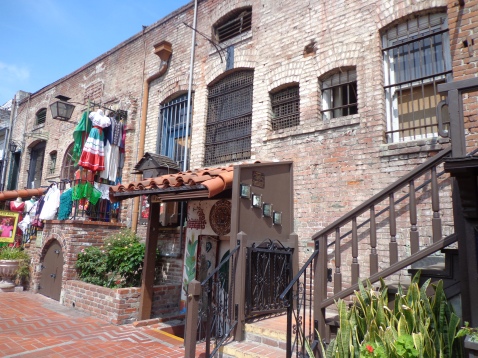 Perhaps this will help:

(Yes, everyone wells up at the end of City Lights, and I do too…but that scene in The Kid reduces me to a blubbering mess.)

Actually standing in this location and looking at those familiar brick walls was an intense emotional experience. Here was the exact spot where the Kid and the Tramp stood. There’s a photo of them, on my phone in my hand. There’s the bricks in the walls behind him, matching up with the bricks I was looking at with my own eyes. I felt awed and appreciative, also calm at first, but pretty soon…waterworks! (Good thing that side of the street was empty at that point.)

So that was a milestone of a day trip. A simple route back to the hostel, and it was time for the next stop: the Hollywood Heritage museum. Which turned out to be a bust–I saw the Lasky-DeMille barn, alright, but despite having a flier stating it would be open on Wednesdays it was closed. Boo. Next trip…!

That evening I got to have dinner at Roscoe’s House of Chicken and Waffles with…Charles Epting! Who is none other than the young editor of the brand-new Silent Film Quarterly, the only magazine dedicated solely to silent film. We had a blast talking about favorite (and least favorite) silents, his upcoming biography on Bebe Daniels, the silent community (ummm yes, there is one, who doesn’t know that?) and of course I got the inside scoop on the magazine. I can confirm that Charles has been working very hard on making the magazine a success, no doubt about it. (And SFQ takes submissions, by the way. *wink*)

This was a day set aside largely for one purpose: researching at the Margaret Herrick library, that world-renowned seat of cinema-related learning. This was big leagues stuff, folks. Intimidating stuff. Details are coming in a follow-up post (my last one about my trip), describing what it’s like and how you can research there, too.

To unwind, that evening I met with historian Joan Meyers at the bar in the historic Roosevelt Hotel. So. The Roosevelt is a complete treasure. It’s where the 1st Academy Awards of all time was held, Marilyn Monroe did her first photo shoot at its pool, scads of stars have stayed there, and it has a fabulous Spanish colonial-style lobby doesn’t just look like old Hollywood, it is old Hollywood.

It’s now one of my top spots in L.A. Ms. Myers was delightful, our conversation was delightful, the surroundings could not have been more perfect, and it was all in all an exquisite way to end a day.

One last day SoCal! What to do? Why, go to the beach, of course!

In my lifetime I’ve been to one California beach one time–Mission beach, I think it was–so I was psyched to hit two of the most famous ones: Venice and Santa Monica. After a  slightly grim bus ride, it was time to check out Venice. There were t-shirt stands and artists selling their works. There was an abundance of people watching, comparable to Hollywood Blvd’s. There were delicious fish tacos. And there were the surfers!! 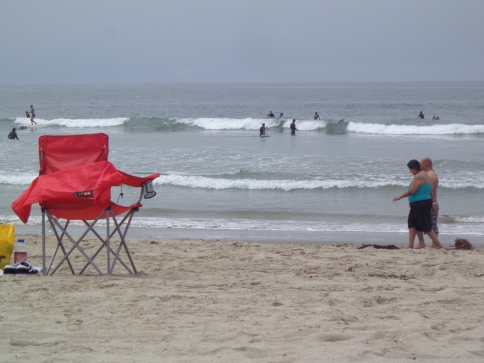 Look, this is the first time in my life I’d seen a surfer in its natural habitat, it was a milestone ‘kay? Minnesota is the land of 10,000 lakes but our picturesque shorelines aren’t exactly buffeted by surfable waves (although there’s a few daring souls who surf the icy waters of Lake Superior, believe it or not).

I spend the morning walking the boardwalk and watching the surfers, and as the June gloom slowly gave away to sunshine I walked alongside the broad beach to Santa Monica and its pier. The afternoon was beautiful, warm and relaxed–and I was spending it at one of those famous California beaches everyone talks about. What a treat. 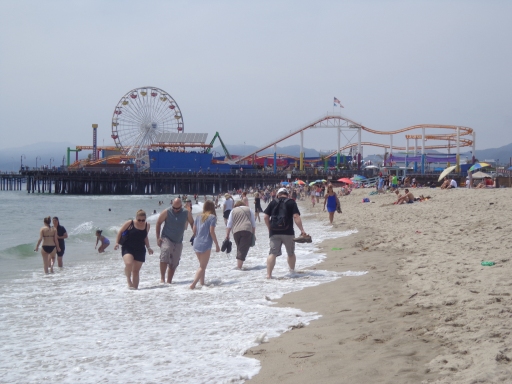 Back on Hollywood Blvd that night, I went for another stroll to experience the noise and the excitement and the neon signs of El Capitan and the Hollywood Wax Museum and such for the last time before getting ready for my flight home the next morning. Seeing the enormous archway and replicas of the Intolerance elephants all lit up was a fine way to end a trip in the place that people like D.W. Griffith made famous.

It was another great stay in one of my favorite places on earth, and let’s all get real here, it’s probably going to be one of a few return trips in my lifetime. Farewell, L.A…for now!

13 thoughts on “The Return To Hollywoodland”