One of the most delightful things about watching a 1920s flapper film is that it’s always happy to confirm all your expectations about the Jazz Age…or the shined-up Hollywoodland Jazz Age, at any rate. The moment you pop in that DVD or plunk down in your seat in the (independent) theater, the bobbed hair, flasks, short-ish skirts, greased-back hair, Charleston dancing and snappy slang come roaring back to life. And what better way to revisit that exciting, “Ain’t We Got Fun?” era than with the vivacious Colleen Moore? 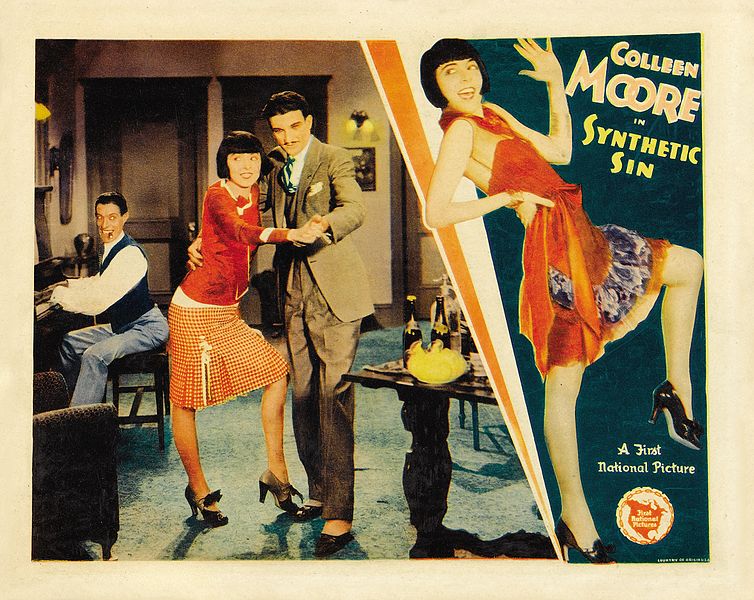 Many of Colleen’s films have been lost, leaving only a handful of her once-wildly popular work available. But joyfully, in the last few years two features have been found and restored–Why Be Good?  (which I reviewed!) and Synthetic Sin, both 1929. While Synthetic Sin‘s less jazz-and-the-Charleston than Why Be Good?, it makes up for it by bringing us the other side of that famous decade–the dark underworld of gangsters and hidden speakeasies. All infiltrated by our sunny Miss Moore, of course.

Moore’s the stagestruck Betty Fairfax, who lives in little Magnolia Gap with her mother and sister. She dreams of being an actress (in live theater) and never passes up an opportunity to try and prove her talents, whether her family and friends are interested in watching or not. When playwright Donald Anthony (Antonio Moreno) returns to his hometown Magnolia Gap as “a success,” Betty becomes determined to get a part in one of his famous plays.

Donald graciously lets her play the worldly, “wicked” woman in his latest production, but she’s not quite worldly and wicked enough for the task and the play bombs. Unwilling to accept defeat, Betty decides to go to New York City and gain some sinful experience.

With her maid Mandy in tow (who seems more aware of the dangers than Betty), she heads to NYC and stays in a hotel with a hidden speakeasy full of shady characters. Really shady–the neighbors in the next room are spats-wearing, fedora-cocking gangsters expecting a shootout any minute. Betty is too naive to understand the goings-on, of course (when she sees two gents picking up a couple of streetwalkers she exclaims how “friendly” everyone seems to be in NYC), but she is delighted to see that the Big Bad City is just as full of sin as she hoped it would be.

While this is perhaps a lesser feature than Why Be Good? and has a rather flat ending, overall it’s still a cute, witty light comedy. It even has an action sequence near the end. One highlight is a gag that seems to be going somewhere alarmingly dark, before it’s revealed to be exactly the opposite (“Another soul lost!” Aw heck, you’d have to see it for yourself). I also enjoyed the scene where Betty performs impersonations, including a highly dramatic pianist Paderewski. (Err, there’s one impersonation where Betty’s in Topsy-style blackface, so if you ever see this in a theater have fun looking forward to everyone experiencing that together.)

What’s also interesting, especially if you’re at all into early 20th century crime history, is the depiction of the hardboiled gangsters who take over Betty’s room (hers was the only one with a piano). The molls, the bottles of hooch, the spats, the cigars, the dude in a vest playing jazz on the piano while smoking one of those cigars–it’s all there, and you realize that you’re not only seeing a depiction of gangsters during the actual 1920s, but that audiences actually read about guys like these in the papers. While Betty is very much a naive girl, thanks to Moore’s skills she never comes across as stupid–“overly optimistic” might be more apt. It’s her naivete that ends up protecting her, too, since the gangsters decide she’s a swell “bimbo” (a term of endearment?) and even move to protect her at one point. Ah yes, if you happen to be into Twenties slang you’ll love this film. One of Betty’s more priceless lines: “Let’s you and I make hey hey while there’s moonshine!” (The audience at my screening died.)

Watching Moore in action, with her expressive round eyes and occasional understated reactions, reminded me of a certain comedian. I’ve never quite agreed with Walter Kerr when he wrote that Harry Langdon shared a “curious kinship” with Lillian Gish, because Colleen Moore is clearly Langdon’s long-lost sister. (It’s no surprise that he winded up making a cameo in Ella Cinders!).

As of right now, Synthetic Sin is not available on DVD but hopefully that will change in the near future. Until then, cross your fingers that there will be a screening somewhere near you, because it’s our Colleen Moore, y’all, and she’s always worth the price of a movie ticket.