Movie merchandise! Not only does it come in everything from smartphone cases to pajama pants, but in many cases it nets the studios more money than the films themselves. Global sales of Star Wars merchandise, for example, are tens of billions of dollars higher than the overall grosses of the films. (The Star Wars geek in me does not mind.)

While some licensing was done early on (Mickey Mouse comes to mind), the bloated merchandise juggernauts we’re familiar with weren’t really a “thing” until Star Wars: A New Hope. It kicked off the craze for action figures, lunch boxes, t-shirts, and so on to the point where Kenner had to issue IOUs for action figures in 1977. And Hollywood has never looked back.

“But weren’t Charlie Chaplin dolls a big thing back in the silent era?” you ask. While merchandising of popular characters and actors wasn’t done on the tremendous scale that it is today, there were various “novelties” that fans could collect in the ’10s and ’20s–often for only a few cents apiece.

In the early 1910s, studios began to realize that if fans were paying to see their favorite stars onscreen they would probably pay for star-related keepsakes, too. The most common items at this time were probably postcards and portraits of popular actors. These were often supplied by studio publicity departments, although rogue companies sprang up here and there: 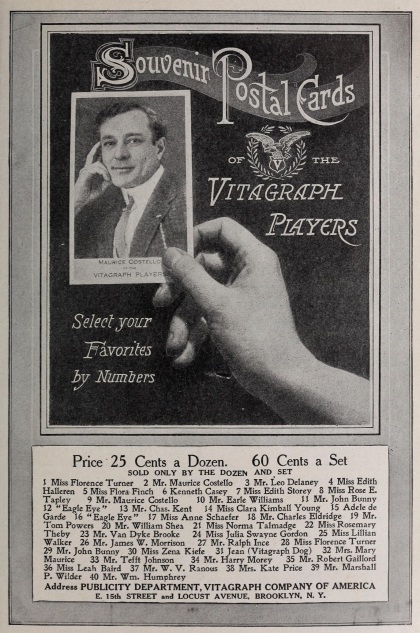 Mary Pickford’s popularity meant that her face was often used to grab people’s attention while they were leafing through movie magazines: 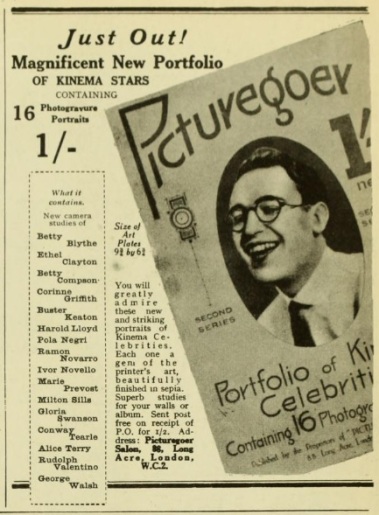 There were more “novelty-ish” items, too. You could get a satin “pillow top” of your favorite star (I would love to find any surviving examples of these!): 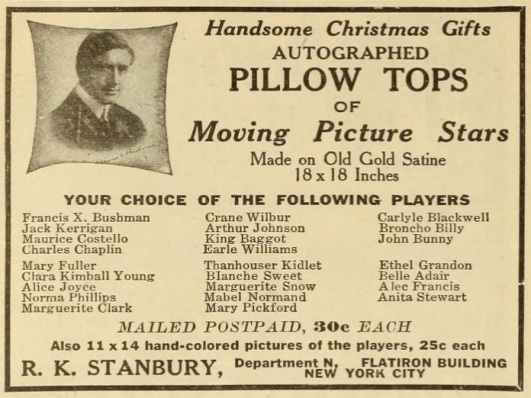 Dress up a handkerchief or glove case: 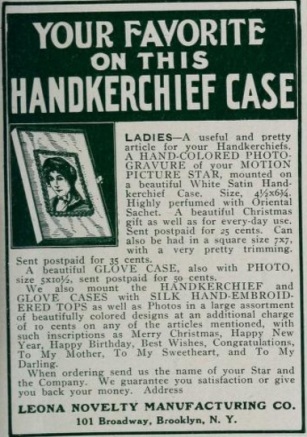 Or even collect postage stamps:

Also available–and these are my favorites–were little felt pennants bearing the names and portraits of film stars. These seemed to have been on the market by the end of 1913 and were very popular until the late 1910s. 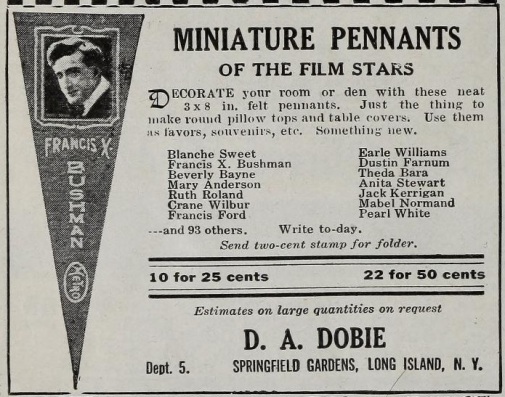 Surviving examples can still be found on eBay and other online venues today. They make for  some charming collectors’ items.

As a matter of fact, I’m a proud owner of a little collection of pennants myself! One afternoon I was browsing an antique shop, and in a pile of old college and sports pennants I turned up…THIS. 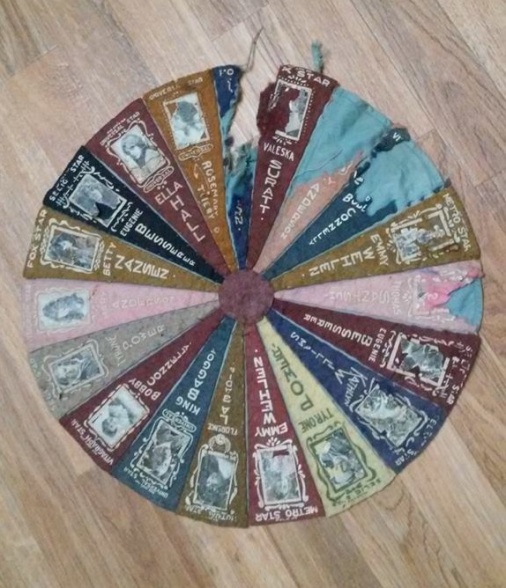 Now, speaking of the Chaplin craze, that could be a topic all by itself. 1915 marked the period of the Great Chaplin Explosion, where there were indeed tons of comic strips, songs, books, toys, buttons, and dolls trying to cash in on the Little Tramp. Here, for example, is a rare tin windup toy: And another windup toy with a rather adorable face (for an antique doll):

Photoplay ran an add for a little statuette in April of 1915: 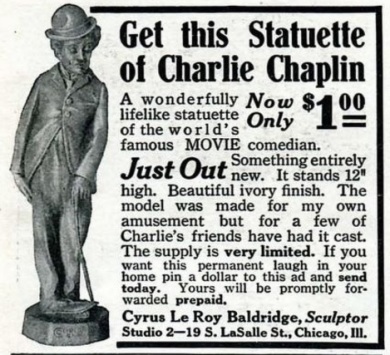 And movie magazines in general had ads for anything sorta Chaplin-related:

Motion Picture Magazine, 1916. Who wants to guess that this was probably something that squirted water?

The problem with a lot of these “funniest novelties ever” was that the Little Tramp himself hadn’t licensed them, and trying to corral all these companies and get royalties was almost hopeless. In 1915 Sydney Chaplin (who took over the business side of his brother Charlie’s career) got a letter from James Pershing (in charge of the short-lived Charlie Chaplin Advertising Service Company), lamenting:

We find that things pertaining to royalties are in a very chaotic state. There seems to be hundreds of people making different things under the name of Charlie Chaplin. First we have to find out where they are, what they are making, and are notifying them as fast as possible to stop or arrange with us for royalties, which is about all we can do.

Other stars popped up in doll or statuette form, too: Alkali Ike, Baby Peggy, Our Gang, and of course Jackie Coogan:

People like John Bunny showed up as statuettes as well:

And there were even dolls you sewed together and stuffed yourself:

Love how he comes with a tiny button.

And let’s not forget one of the most common collectibles of all: sheet music! I have this one framed!

These were the days when many homes had pianos, after all–and many people got their music courtesy of any friend or relative who could play.

Happily, certain early movie collectibles are easily obtainable online. Sheet music in particular can be gotten for a song (haw haw), and antique shops tend to have stacks of it. Pennants, postcards and (non-signed) portraits are inexpensive too. I’ll put in a good word for cigarette cards–huzzah for an adorable item that you can have thousands of and still store in nothing bigger than a shoebox!

Are you a collector of early film merchandise? Do you have anything unique or unusual? Feel free to share in the comments! I always love to hear what people have (and try not to get too jealous!).

My main source for most of these clippings was the venerable Lantern site. Info on the Chaplin Craze came from David Robinson’s authoritative biography Chaplin: His Life and Art. If you’re interested, there’s a neat thread that discussed silent star dolls and figurines here on Nitrateville.