Among the ranks of the Forgotten Comedians there were many whose talents admittedly didn’t stand the test of time. They may have lacked charisma, or weren’t particularly unique, or maybe their films were uninspired. Their obscurity today is unfortunate, but understandable. But then there are others who were not only talented, but had personalities so colorful, so larger-than-life, that their obscurity is really almost inexplicable. Charlie Murray is one of these.

His life is a slice of entertainment history with a dash of Americana. A Midwesterner of Irish heritage, Murray was born on a farm in the small town of Laurel, Indiana in 1872–around the time when Mark Twin was becoming famous. One of five children, Murray  was an exceptionally mischievous child who the townsfolk nicknamed “Sinner.” His family would move from little Laurel (its population still hovers around 500 today) to Cincinnati when he was still young. Never a fan of school, Murray sold papers and developed a fascination with the theater. Around the tender age of 11 he left home to follow his dream of “trodding the boards.” He joined circuses and Indian medicine shows, and by the time he was a teen had already worked as a clown, acrobat, and daredevil rider.

He returned home for a time to recover from an injury gotten in the line of circus duty, and became close friends with fellow struggling performer Ollie Mack. The two would develop an act called Murray and Mack, and would become one of America’s most popular vaudeville teams–touring back and forth from one end of the country to the other for over twenty years.

Wearing Irish comic costumes, Murray and Mack became known for their effortless joke delivery and quality musical comedy shows with titles like Shooting the Chutes and Our Irish Neighbors. A 1907 Washington paper said of their show:

Nature made them comedians, and their own unremitting work has placed them in the front rank. There isn’t any of the loud “boisterous hurrah” about Murray and Mack’s work. It is the dry way they say things and in their quaintness of interpretation which is so funny. The details of their work is perfect and their points are made without any apparent effort.

But all good things must come to an end sometime, and after their two-decade partnership Murray and Mack parted ways–Mack to work in advertising, and Murray to try out the newest form of entertainment: motion pictures.

In 1912 he was hired by Biograph, which needed some new comics to fill the void left by director Mack Sennett. Thus he learned the ropes of the “picture business” at one of the finest studios at the time. In 1914 Murray’s director Dell Henderson decided to join Sennett in sunny California, and Murray decided to come along too. It was a perfect career move–Sennett’s Keystone Film Company was the biggest comedy draw in theaters by then, top comic Ford Sterling had recently left, and a pro like Murray was an ideal fit for its loopy, energetic, fast-paced environment.

Murray brought 30 years of showbiz experience to the table, complete with an unshakeable screen presence. His large, expressive face, with strong features including a mouth that could make him resemble a child’s drawing of a sad stick man, made a memorable screen impression and he soon became a favorite with audiences. (And many of them no doubt recognized him from vaudeville.) Murray worked for Sennett for eight years, eventually adopting a costume of Dutch chin whiskers, a conductor’s cap, and hair with a deep side part. Some of the Keystone actors were given character names and their own series, especially in the early years–Mack Swain was “Ambrose,”  Louise Fazenda was “Maggie,” Roscoe Arbuckle was “Fatty” of course, and so on. Murray was dubbed “Hogan,” playing an often-drunk laborer causing chaos in the homes of the elite. These films had titles like Hogan’s Mussy Job, Hogan’s Aristocratic Dream, and Hogan’s Wild Oats.

He was also frequently paired with roughhousing Polly Moran and the likeable Fazenda. The latter worked so well with Murray that the two were an informal comedy team for the next couple years, with Murray often playing a schemer trying to get at country girl Fazenda’s rumored inheritance.

In 1921 Murray decided to leave Sennett and tour in vaudeville for a time. Unable to stay away from the screen for long, he starred in shorts by All Star Comedies in 1922 and ’23 and made a brief return to Sennett. He would continue to make shorts for various companies until the mid-1930s. During the Roaring Twenties he began to appear in features, including Larry Semon’s The Wizard of Oz (1925). In time he received a fortunate pairing with George Sidney for a feature called The Cohens and the Kellys (1926), about the perpetual bickering between an Irish family and a Jewish family living in the slums of New York. It was so popular that it spawned its own series, lasting until 1933 and keeping Murray familiar to audiences everywhere.

Offscreen, Murray was that rare type of comedian who was as hilarious in person as he was in character–if not more so. He was an entertainer to his core and never passed up a moment to share a joke, whether it be with one person or an entire crowd. On a rainy day at Keystone he might have a fellow actor play the piano while he danced on a stool for onlookers. While the editors were busy at work on the tedious business of cutting that day’s footage, Murray would wander in and liven up the mood with jokes and off-color stories. “You never heard the same story twice,” editor Stuart Heisler recalled. “He’d disrupt that goddamn cutting room every time he came in.”

He was a tremendous performer, on as well as off the screen. He had an endless storehouse of jokes and he never seemed to repeat one of them. I swear he couldn’t pass anyone without telling at least two jokes. He loved to perform for people and they loved it.

During the 1910s Murray was frequently at hand to be the master of ceremonies at various Hollywood events, including benefits for the Actors’ Fund. He also donated his fundraising services to the Red Cross during WWI. In his spare time, he enjoyed no hobby more than “staying home nights,” as he blithely told one reporter.

He was a popular and lovable guy in Hollywood who had a busy and successful career, but Murray may have taken the most pride in one thing: his long and happy marriage to fellow vaudevillian Nellie Bae Hamilton. In an 1917 Photoplay interview peppered with jokes (“I never smoked opium, but smoked herring is a passion with me”), he talks about her with affectionate hyperbole:

My greatest fault is in loving my own wife, and I have had the same one for fifteen years. I never go out without her; if I did, I’d never get in when I got back. We never have a word in the apartment, as my landlord has provided a roof garden where all the married couples air their differences…

I am generally in the dressing room at eight-thirty in the morning and I leave the studio at four in the afternoon and hike me to my six-room tepee, where two wonderful arms and two beautiful big black eyes, with all the love and warmth that can breathe from a body that is as perfectly molded as the Venus de Milo and a face as adorable as Mona Lisa’s, stretch forth their sublime loveliness and bid me welcome. After a strenuous day at Keystone, I am amply repaid for all the pies and bruises and falls that I have met with.

The two had wed in Muncie, Indiana in 1906, and their marriage lasted until his death from pneumonia in 1941. According to Brent Walker’s book Mack Sennett’s Fun Factory, they had one daughter.

Charlie Murray was one of the last and best of his generation of performers, those who were born to a colorful Victorian world of medicine shows and circuses and who worked steadily and skillfully until they reached the sleek sets of bustling Hollywood movie studios. He was a one of a kind guy, and his legendary wit can still be faintly felt in written anecdotes and old publicity stories. Here’s to hoping that he’ll continue to be remembered as fondly as he was back in his heyday–and for now, hats off to you, Mr. Murray. 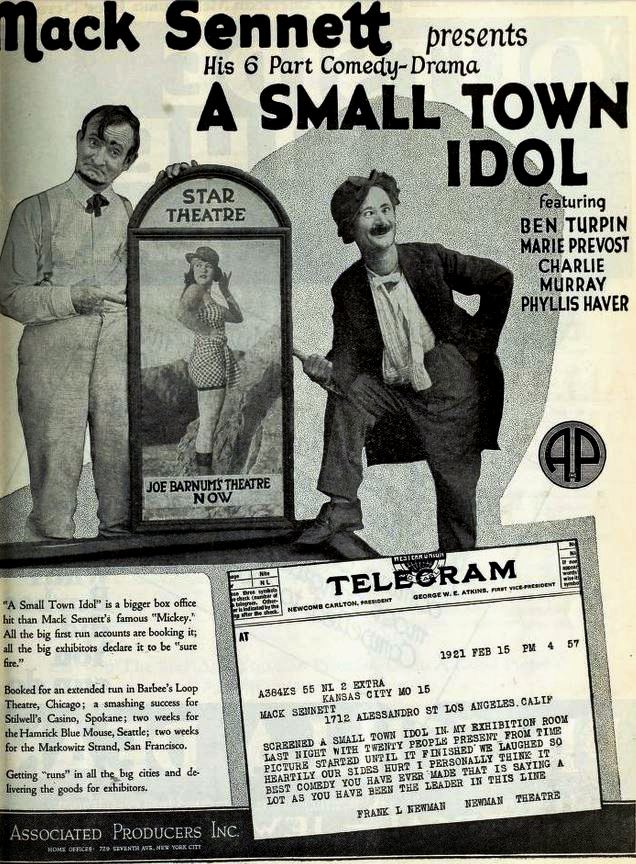 My other top sources for this article, as well as all the articles for Forgotten Comedians Month, are:

12 thoughts on “Hats Off To Charlie Murray”