One of my absolute favorites among all the obscure comedians is Charley Bowers, a man once so thoroughly forgotten that it’s remarkable he was ever rediscovered. Were it not for the director of the Cinemathèque de Toulouse, Raymond Borde, who bought some old film cans from a carnival and noticed one marked “Bricolo,” we might not have Bowers’s work today. And what a darn shame that would be.

We would not, for instance, get to see eggs hatch into tiny Model T Fords, or broomstick ostriches dance to a Victrola, or pussy willow branches blossom into live pussy cats. We would miss out on gangs of thuggish oysters and singing, dancing drops of petroleum. The world would be a little less surreal.

Small and thin, with curly hair he always parted on the side, Bowers looked a little like Buster Keaton’s pale French cousin. For a time the head of the 1910s studio behind hundreds of animated Mutt and Jeff cartoons (based on Bud Fisher’s famous comic strip characters), in the 1920s Bowers made the leap to live action comedy shorts. Advertised as “novelty comedies,” they were basically showcases for his obsession: stop motion animation. Around half of these shorts are lost, but those that survive are full of some of the most whimsical, expertly engineered, and downright bizarre animations that your eyes shall ever behold.

Bowers usually played an enthusiastic and obsessive inventor. While a competent enough actor, he didn’t really have a distinct persona of his own and clearly imitated other popular comedians. In his first shorts he had a vaguely Keatonesque air, and toward the end of the ’20s it had morphed into Harry Langdon-ish wide-eyed befuddlement, round Harry-ish hat and all. (And his appearance in a 1930 talkie short featured a derby very similar to Stan Laurel’s.) But what did a vague persona matter, if he had the opportunity to let his imagination go wild through the wonders of his “Bowers process”–his mysterious term for his stop motion animation?

The plots of his 13 fairly successful “Whirlwind Comedies” often involved Bowers creating fantastical machines, all metal, rubber, and wood (in that pre-plastic era). His machines would perform every menial household task imaginable, or stop eggs from breaking, or even run an entire restaurant though a few button pushes. He would invent a formula to remove the slipperiness from a banana peel or figure out a way to graft anything onto a tree–even a branch that grows an eggplant containing an egg and an accompanying salt shaker. (Bowers was obsessed with egg-related gags.) Usually Charley the inventor was so caught up in his work that he accidentally wreaked havoc for unlucky family members and neighbors nearby. Much of the humor revolves around the sheer absurdity of his creations, and the delight of seeing them in action.

The names of these shorts were oddly dry: There It Is, He Couldn’t Help It, Many a Slip, Say A-ah! But don’t be fooled by these titles–the films could be wildly, feverishly surreal. There It Is, about Charley’s exploits as a Scotland Yard detective recruited to solve the case of the Fuzz-Faced Phantom, is one of the best examples. ‘Tis not a film for the stodgy-minded (or possibly faint-hearted). Charley even has a tiny sidekick in this one, a sort of bug named MacGregor. 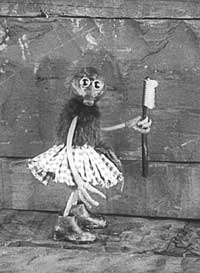 One short seems to be particularly inspired by their creator: Now You Tell One, about a “Liars Club” where members try to top each other’s outrageous stories. For if anyone loved outrageous stories, it was Bowers. This was a man who was every bit as quirky as his films. Facts about his early life are a question mark, since you could barely trust a word out of his mouth. To hear him tell one, as a young boy he had been kidnapped by the circus (clowns?) and upon hearing the news his father died of shock on the spot. Thus began Charley’s whirlwind life that started at the age of six and kept him on the move from job to exciting job until he settled into the career of “animator”–so he said.

What we can piece together is that Charley was born in Cresco, Iowa, likely in 1889. Whether he really had worked as an actor, acrobat, bronco buster, reporter, etc. ad he claimed is tough to pin down, although we know he had been a cartoonist for The Chicago Tribune and The Chicago Star and became interested in animation sometime in the mid-1910s.

What little else we know about Bowers comes to us courtesy of animator Izzy Klein, who in 1975 thankfully wrote an in-depth article about working for his former Mutt and Jeff studio boss. As Klein recalled, Bowers wrote all the stories for the cartoons himself and made preliminary sketches for the animators to fill in. Several of his busy staff, including Klein, would one day work for Disney–such as Albert Hurter, a major contributor to the visual style of Snow White and the Seven Dwarfs.

Klein remembered Bowers as a man who overflowed with tall tales, often revolving around his own supposed bravado. His employees secretly got a kick out of his obvious bluster. Bowers claimed he had been a tightrope walker, forced into the quieter profession of cartoonist only after a stunt went wrong. He would brag about his time as a reporter, when he of course had met Woodrow Wilson and Theodore Roosevelt (to name a few) and they had naturally all called him “Charley.” One of the odder stories he would earnestly tell involved his “astral body.” He insisted that he used to be able to lie down and drift into a trance, allowing his “astral self” to drift free to spy on his fellow actors, later telling them details that amazed them. This skill just happened to be around only during his acting days. “All these stories he would tell in the most minute detail,” Klein recalled. Bowers was also somewhat of a sketchy figure, wheeling and dealing his way through schemes that his employees only caught glimpses of, and probably making more than one mortal enemy. He seemed to glory in the drama of it all, as Klein makes clear in this colorful (and wildly entertaining) story from those Mutt and Jeff days. Bowers had left the studio in a hurry, returning a few hours later afire with emotion:

First, the studio door opened. Bowers stood in the doorway long enough to attract everyone’s attention. Then he carefully closed the door. His next move was to put a hand into one of his pockets and produce the studio door key. He flourished it for all of us to see, then he turned and locked the studio door. Beyond a doubt he had the audience in a state of expectant excitement, in fact, scared excitement…

There followed a significant pause. Then in a loud stage whisper: “RAOUL BARRE HAS CRACKED UP…HE’S GONE CRAZY THIS AFTERNOON…he is on his way up here to wreck the studio and to shoot me dead!” Then Bowers continued: “Barre has withdrawn all the money from our joint bank account…all in small bills. He is scattering the money out on the streets and at the same time is waving a revolver and hollering, ‘I’m going to shoot that crook, Charlie Bowers'”…

The studio door remained locked and Charlie Bowers retired to his office…Nobody could work, expecting the glass of the door to be smashed any minute and a mad man to come through blazing away with his revolver. An hour or so elapsed. The studio was in a sick room-like hush…A phone rang in the office…There was a pause and then Bowers came out and announced that we were out of danger. Mr. Barre had been captured by the police without a struggle.

Barre retired from animation in 1919, having been driven to distraction by Bowers for just too long.

One momentous day Bowers was fired from the studio for–not too surprisingly–padding the books. Undaunted, he shamelessly tried to return and finally resorted to talking his way into creating Mutt and Jeff films for Fox Films, convincing Klein to come along with him to his humble new studio (he later recalled Bowers tipping the moving man in that Prohibition era with a bottle of sought-after whiskey–“A true Charley Bowerism”–as well as pilfering some chairs from an assembly hall). 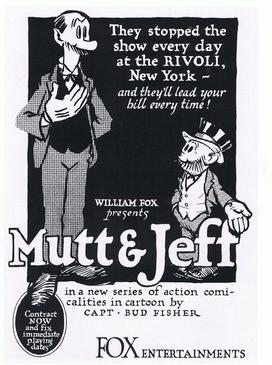 At one point his previous employer showed some annoyance at Bowers’s competition, so Bowers bought some boxing gloves and insisted that he and Klein spar every day for a week, just in case self-defense would be needed. (It never was.)

The stint in his new studio ended when his own employees decided to force Bowers out. But this didn’t stop him for long. He had become sufficiently enamored with stop motion animation to try his hand at a new project: live action shorts. And I couldn’t be happier that he did.

After the 1920s, Bowers starts to fade from view. He made a talkie short in 1930 called It’s a Bird, with a spectacular animation sequence showing a full-size Model T hatching from an egg. (A few years later the short would be gushed over by surrealists.) In 1940 he made two stop-motion shorts about a mouse family dealing with cats and gangs of thug-like oysters. He was commissioned to make Pete Roleum and His Cousins, an animated promotional film for the Standard Oil Exhibit at the 1939 World’s Fair–an odd, darkly-lit film featuring rubbery drops of singing and dancing petroleum. Director Joseph Losey remembered Bowers as “a small, frail man, a tireless worker, and obviously a first-rate technician. I was struck by his tired, resigned expression, though he was relatively young. His work seemed like terrible endless labor.”

Perhaps the resigned expression signaled his fate. He would suffer from a mysterious illness for five years before dying in 1946, and his stop-motion work–that endless labor–would disappear from the public’s mind.

But time has been kind to the brash, workaholic, tall-tale-loving Charley Bowers. His films are available on DVD sets, have played at film festivals, and exist online for anyone curious enough to stumble across them. He’s even been called a forgotten genius (he’d no doubt completely revel in this). I for one am thrilled that he’s around, and I’ll be doing my part to help make sure future generations will also get a kick out of his bizarre, singular work.

Here’s He Done His Best (1926), one of my favorite Bowers comedies.

I had previously written a biography on Bowers for my oft-neglected Some Biographies page. You can take a look at it here. Much of it had to rely on online sources–some have links that may have since changed.

19 thoughts on “The Quirky Charm of Charley Bowers”