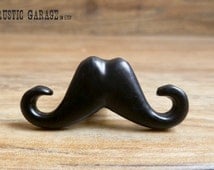 In the modern mind, film comedies of the early 20th century are associated with three dominant tropes: cream pies, banana peels, and fake mustaches. While the first two cliches were not as ubiquitous as society may believe, there certainly was a rich crop of crepe mustaches glorifying movie screens across the globe. For bearing the finest of these enrichments of celluloid mirth, we are pleased to honor the following inductees:

The star of many a Keystone short, Swain’s imposing, 6’2″ figure was rendered unforgettable with this eye-popping makeup. Not content with a mere bit of crepe, Swain fashioned this accessory to cover his entire upper lip, balancing this indulgence with generous amounts of makeup around the eyes. Particular notice should be given to the slender lock of hair on his forehead, which only Swain’s fertile imagination could have envisioned. 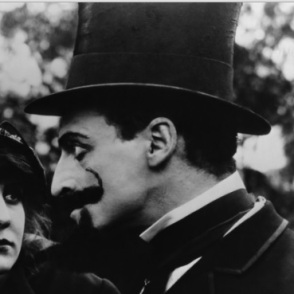 A veteran of Keystone, Essanay, and several other studios besides, Leo White was noted for his confident portrayal of a boulevardier, known otherwise as a French man-about-town. His ensemble of top hat, monocle and goatee were arguably secondary to the real star of the show, his luxurious mustache, which at times extended over his cheeks while the waxed, upturned ends came dramatically near to touching his eyes. In truth, we can say that here was an artist wholly dedicated to his craft.

Induction category: Most Likely To Not Be Recognized, Like, At ALL Without His ‘Stache

One of the most familiar early players working for Mack Sennett, Chester Conklin’s mighty fringe was so famed that his character was soon bestowed with the name of “Walrus.” Without this accessory, Conklin was hardly to be recognized, and indeed seemed diminished, a pale shadow of his true greatness. While it would evolve to be more natural-looking than it was in his Keystone glory days, Conklin’s mighty ‘stache would be an essential component of his costume throughout many character roles in the 1920s and even unto the ’30s, ’40s and ’50s. 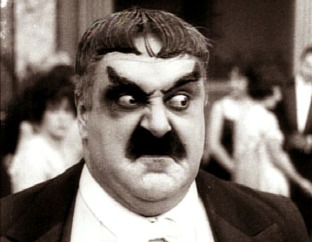 Who ever gave the black mustachioed villain a more lofty presence than Eric Campbell, Chaplin’s supporting player in many a short film? While his time on this earth was brief (passing away in 1917 at age 37, may he rest in peace), he left an enduring legacy: a dark ‘stache paired with appropriately fiendish eyebrows. Always inspired, he often included a large beard to further heighten his intimidating presence, going above and beyond in the line of comic duty. 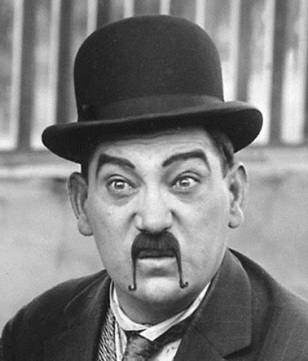 Not even Salvador Dali could create a mustache that tiptoed so gleefully along the edge of the avant-garde as the one belonging to this Sennett stalwart. Being a strong statement with a refreshing touch of whimsical delicacy, Conklin’s accessory shall go down in the annals of silent comedy as one of the most unique ever captured on film. (Note: No relation to the aforementioned Chester.)

One of our enduring cinematic greats was at one time was identified with a costume that is now foreign to many modern audiences, that of his 1910s “Lonesome Luke” character. Endeavoring to both emulate the much-admired Chaplin as well as forge a persona of his own, Harold Lloyd deployed two dots of crepe in a slightly obvious play on the British comedian’s iconic look. While he eventually abandoned this creation, Lloyd’s creative ambition earns him a lasting spot in this Hall of Fame.

Induction category: Most Clearly Borrowed From A Comic Strip

Australia native Billy Bevan favored a strong, structured mustache reminiscent of those that might grace beloved comic strip characters. Once in the employ of Lubin, Sennett, and other studios, Bevan was a familiar presence to audiences of the 1920s and a offered a likeable and indeed cartoon-like energy to the many shorts and bit parts he was given. For this fine work of clean lines and pleasing symmetry, we are honored to induct Mr. Bevan.

When we consider the ranks of those who “think outside the box,” Jimmy Aubrey is clearly one of the most courageous examples. Bearing one of the most unusual mustaches in all of silent comedy, he bid audiences to contemplate its uneasy resemblance to creeping caterpillars, or perhaps the bleeding of the nose. A hardworking performer, he lent his vague persona to numerous films, from the 1910s to the 1950s.

Many performers are identified their mustaches, but few are as deeply welded to it as the striking Snub Pollard. He not only embraced his facial accessory, but embraced it in all its richness, designing it to flow poetically down his face with all the grandeur of the clinging vines at Angkor Wat. Or some moss. For his generosity and fearlessness, we are proud to induct that exceptional comic, Snub Pollard.

I trust that I need not say more?

I thank you all for attending this ceremony! Refreshments courtesy of Los Angeles Pie Co. will be served in Dutch Comic Hall, with seltzer water included. “Doing The 108,” our pratfalling demonstration, will take place at 3:00. Please help yourselves to a complimentary derby-shaped gift bag consisting of mustache wax, greasepaint, and crepe. Thank you again!

Google Images turned up a lot of goodies for this post. My other top sources for this article, as well as all the articles for Forgotten Comedians Month, are:

15 thoughts on “The Silent Comedy Mustache Hall Of Fame”