It’s massive, it’s epic, it’s stuffed with stars and just about drips with drama. It was one of the biggest spectacles the world had ever seen, and its scale is still awe-inspiring. It fired the imaginations of directors and left audiences reeling. And it’s…somewhat liked by silent film fans today. Somewhat.

Okay, I’ll admit that this weak enthusiasm is understandable. Intolerance is kind of the equivalent of Norma Desmond’s Isotta-Fraschini automobile–in its day it was the last word in decadence, but decades later it seemed like a cumbersome and overly-ornate relic. Intolerance demands your full attention to not only one but four storylines, often with multiple characters with different actions and motivations. It’s uneven. It tackles Serious Subjects like war and injustice toward the working man. And yes, it’s very long.

So it’s not too surprising that for many silent fans, especially the casual fans more into Clara Bow flapper flicks and Harold Lloyd comedies, it can be hard getting into Intolerance.  We can probably agree that it’s not something you just pop on to relax after a long day’s work…

Looks relaxing to me!

I’ve watched Intolerance quite a few times, because of the spectacle (very exciting to see in a century-old film) and the fact that I was determined to “get to know” it. And you know what? It really doesn’t have to be the impenetrable piece of Ahhrrrt many people think it is. So here’s some unorthodox tips on how to “get to know it” yourself.

First off, I’m not saying that Intolerance isn’t the kind of film you could call “turgid.” (Or “grandiose,” “grandiloquent,” “orotund,” or other big words that are fun.) I’m saying that very orotundity (fun!) is part of its charm. You always hear about those big, ponderous epics dealing with lofty themes that make cinephiles across the globe feverishly begin articles to film journals. What could be more epic and lofty than Intolerance? It’s glorious!! (I also adore silent comedies where they actually throw pies.) 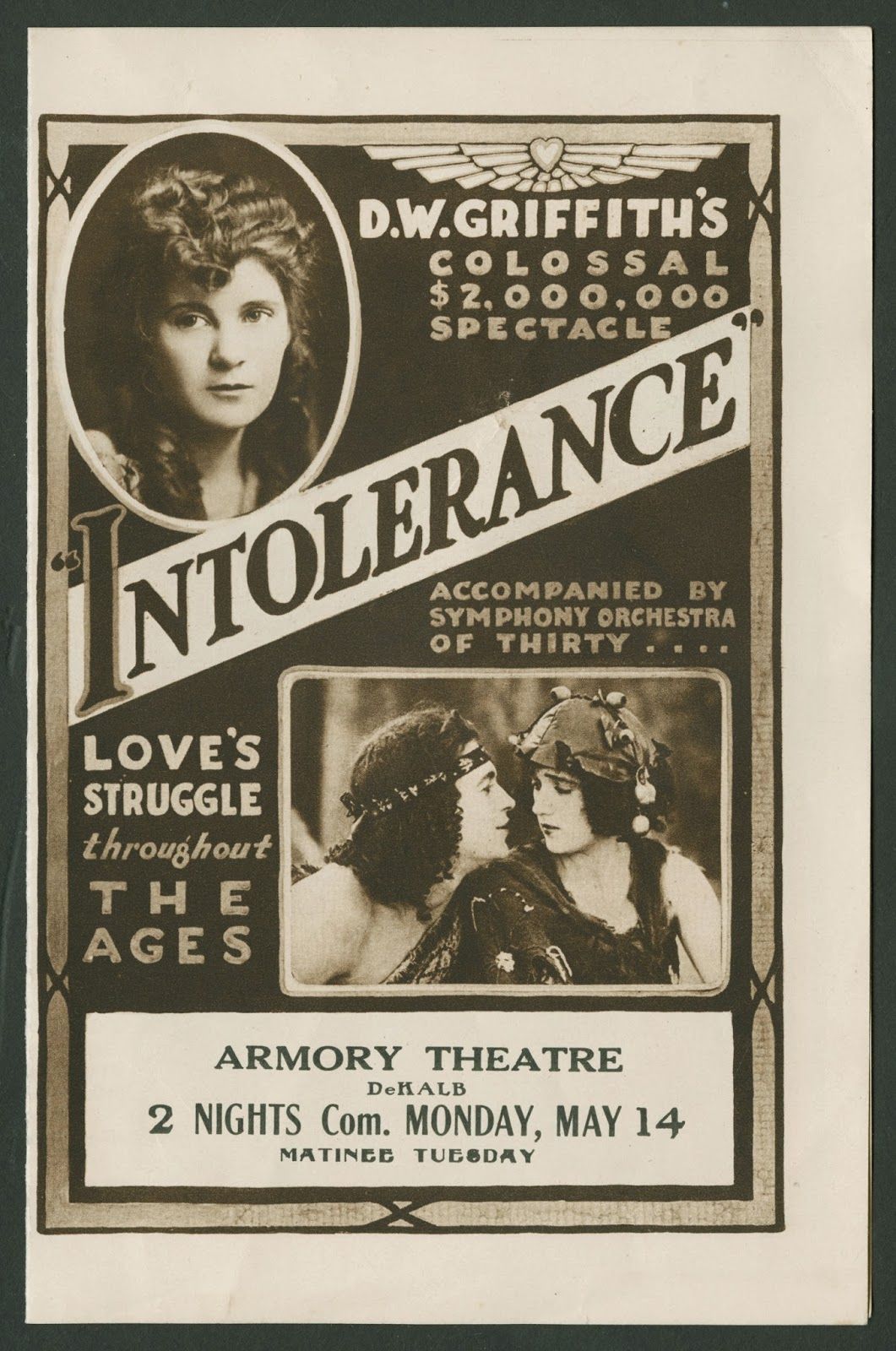 “But it’s still too long,” complains the generation that frequently bingewatches an entire season of a TV show on Netflix. Sure it’s long–and yup, when you watch it for the first time you need to watch the whole thing. That iconic Babylon celebration scene must be viewed in its proper context. But! Don’t just plunk down and start playing a crappy YouTube version on your laptop while your friends play Cards Against Humanity in the next room. Set aside a quiet evening. Find a nice copy (via Kino or the mindblowing Cohen Film Collection version). Make it special–sip on some wine, make your favorite snack, light a candle, stop checking Facebook, whatever it takes. This is not an ordinary movie, anymore than the Notre Dame is an ordinary building.

Now that you’ve seen the whole epic with the reverence it is due, get to know it. Have some fun with it. Maybe next time you’ll just rewatch your favorite scenes (the ones with Connie Talmadge, for instance–she’s hilarious!). Maybe try watching just one of the storylines at a time. Try finding little details you didn’t notice the first time. And say you’d like to see the whole thing again, but don’t feel like sitting for four hours. Just watch an hour’s worth each night, and voila!  It’s like following a miniseries. (I know purists might not like that, but for cripes’ sake, man, we’re actually watching Intolerance.)

Seriously, she’s priceless in this!

Oh, and speaking of non-purist tips to exploring ponderous dramas, here’s some personal trivia for ya: I’m one of those people who has to fall asleep with the TV on. (Playing quietly with the screen dimmed, mind you.) One of my go-to “fall asleep” films is Intolerance. I give it my full attention from the comfort of my warm cozy bed until drifting off, and the next night I’ll resume it with the last scene I can remember. I must’ve watched it a good dozen times that way. It’s swell, you guys. You can get to know an awful lot of big serious epics by falling asleep to them. (La Roue, for instance.)

So give this Griffith epic the reverence its due, but don’t be afraid to really dig in and explore it, the way you would a new music album or a dense but fascinating novel. I’ll be following up with 1 or 2 more Intolerance-themed posts this month, more fully explaining why it’s a heaping bowl of awesomeness that should be celebrated by silent fans around the globe. Cheers!

27 thoughts on “How I Learned To Love “Intolerance” (And So Can You!)”