In our minds, we picture Intolerance differently than most films. Say the title, and we usually don’t see the faces of the Dear One or Brown Eyes or run shots from the four storylines through our minds. We picture the photo of the massive hall of Babylon. We see the sharp-edged archways, the curves and ridges of the immense pillars, the  white elephants with their peculiarly defined muscles and curving trunks. We also see the masses of tiny people on the floor of the hall, clustering around the feet of the elephants, and lining the top of the archways. There is an awed sensation when you think of this dense image. Perhaps there is also a sense of remoteness.

But recall the actual scene itself, how the camera slowly, smoothly moves forward, closer and closer until we can clearly see the people, see the details of their clothes, and can see their faces in their matte makeup.

Intolerance focuses on its four stories like a magnifying glass held at different lengths. There are vignettes from the life of Christ, portrayed with dignity and perhaps with some debt to old Passion Plays; romance between a prince and his beloved amid the grandeur of ancient Babylon (plus a lively mountain girl); the closeknit 1500s French family of “Brown Eyes,” soon to suffer from a plot by the de Medicis; and finally the character-driven story of a young “modern day” tenement couple torn apart by circumstance. From the familiarity of the New Testament scenes we zoom in all the way to the intense focus on the modern story, raw and emotional, punctuated by Robert Harron’s horror-filled eyes and Mae Marsh’s anxious hands.

The magnifying glass flicks back and forth, from the epic to the intimate, from the poetic to grim realism. Ancient, modern, the Renaissance–through it all the Mother rocks the Cradle, eternally watching, eternally daydreaming.

For all the talk of D.W. Griffith being “a product of Victorian times” (I guess this is a slight), his film has guts. We see two beheadings, swords running through bleeding bodies, half naked women sprawling seductively on couches, and even someone vomiting on camera. The moments can be a little startling to see, for a product of 1916. Imagine how Edwardian audiences must’ve felt.

And how did they react to those magnificent action scenes? The racing chariots, the luridly-lit night shots, the mighty seige towers slowly advancing on the thick walls of Babylon–it was all possibly without peer until the Lord of the Rings trilogy came along many decades later. It’s easy to forget it was filmed during WWI.

Griffith’s opus may brood over the dark, lofty theme of “intolerance,” but it’s also lit up with beauty. The Babylon scenes are jawdropping in their attention to detail. Everything–everything–from the beading on the gowns to the designs on the shields is impressively ornate. And that famous shot of the great hall, with its elephant statues and its lines of languid dancers and banners waving in that huge space, is enough to bring tears to my eyes. This is cinema!

There’s also the rich decor of the de Medici palace…if we remember it. The Renaissance story is the one that everyone tends to forget, and connects with the least, even though it’s probably the most blatant example of “intolerance” in the entire film. We simply don’t get a chance to sympathize much with Brown Eyes, and when she meets her fate (a brutal one at that) we’re sorry for the poor girl but we don’t feel that we’ve lost a friend.

It’s different with the modern story, certainly the most powerful of the four. The Christ storyline can rest on its familiarity (not that it isn’t done with care), and Constance Talmadge’s tomboyish character keeps Babylon down to earth, but the Boy and the Dear One are the most human. We need them in Intolerance. Robert Harron and Mae Marsh had been paired in Griffith films for years, and this is the height of their work together. Look at Harron’s long, broken look as he holds his father’s body. Look at how Mae Marsh gives a little swoon in spite of herself when Harron first strokes her hand.

We can talk and talk about the weaknesses of the film— the heavy-handedness of the title cards, its uneven storylines (although that’s due to chopping out much of the original 8-hour cut), the shaky case for Babylon being a kind of ancient paradise–but when the Boy and the Dear One embrace at the end I’m always moved to tears.

Still, in my opinion there’s one thing Intolerance could’ve taken much further–the climax. It famously switches from one storyline to the next, faster and faster, until it reaches a crescendo in the ending of the modern story.  But does it really jump back and forth that quickly? For instance, we have a nice switch from Cyrus’s charging armies to a car racing a train, but then the focus lingers on the modern setting long enough for the rhythm to be broken. When I saw it for the first time I’d hoped for everything to build to a glorious rapid montage of images–maybe not as fast as Sergei Eisenstein’s, but in a similar vein. How exciting, fresh, and modern would that have seemed? 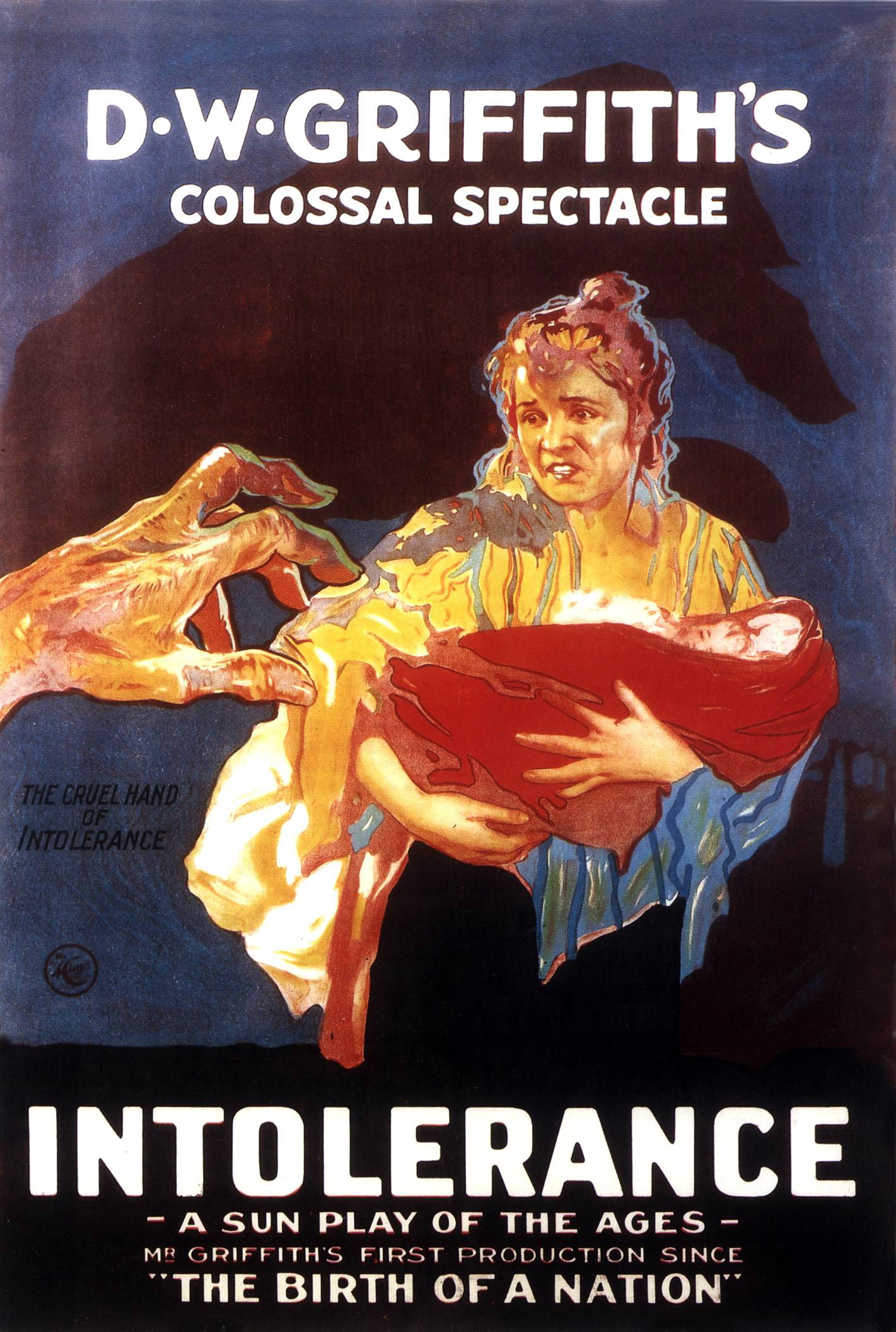 I love Intolerance. I love how earnest it is, how it’s concerned with nothing less than the greater good of mankind itself. How many other films have been so ridiculously ambitious, and on such a scale?

We in 2016 stand on a summit of jawdropping special effects and pristine animation. There are cameras that can soar through the air on little helicopters or plunge into the depths of the ocean. Anything we can visualize, we can create onscreen. There are gorgeous fantasy worlds, robots with a thousand complex parts, and stunning landscapes galore. We’re accustomed to wonder; we hardly discuss special effects anymore.

But one hundred years ago in a southern California town, all fruit orchards and country stores and small bungalows, a stubborn man with a dream built the great halls of ancient Babylon. And the wonder of that real, handmade set is still strong, still humbling, as it doubtless will be a hundred years from now.

27 thoughts on “Thoughts On: “Intolerance””