Today, let us extend a suitably theatrical nod toward the “vamp.” That wicked temptress of yesteryear, pale-skinned, alluringly dressed, leading respectable gentlemen to their doom. And don’t forget the copious amounts of kohl eyeliner, which made them appear like the Victorian-themed dream of a goth kid who fell asleep still clutching his dog-eared Edgar Allan Poe book.

Whence came the vamp? Short for “vampire,” the word meant a female seductress with an almost supernatural ability to drain male victims not of their blood, but of their…life force. Or something like that. Ask someone from the 1910s to name a vampire, and they were just as likely to say “Theda Bara” as “Count Dracula.” If not more so. But it wasn’t always this way. “Vamp” used to have very different meanings–before the 1910s,  it usually meant either the top part of a shoe or the ability to improvise on a musical instrument. You can find a number of old 1900s ads looking for musicians that can “vamp a piano” or “vamp an organ,” and tons of ads for “short vamp shoes” (shoes that stopped below the ankle rather than covering it boot-style). It seems to have been a slang term for fleeing or sneaking off, too.

The first use of “vampire = alluring woman” stems from this 1897 painting The Vampire by Philip Burne-Jones, highly inspired by Bram Stoker. Viewers were all a-flutter–was the the young man drained of blood? Or…left exhausted?

The only explanation Burne-Jones would give was this popular poem by his relative Rudyard Kipling. You might recognize its most famous verse:

And let’s recall this one, for its pure significance:

The female vampire began to be a pop culture trope. Alice Eis and Bert French created a vaudeville act featuring a “Vampire Dance,” basing it on the Burne-Jones painting. A play called A Fool There Was debuted in 1909, with The Vampire played by Katharine Kaelred.

But it wasn’t until 1915 that the vamp officially became popularized by, of course, Theda Bara. She technically wasn’t the first one to appear onscreen. Helen Gardner starred in Cleopatra in 1912, and Rosemary Theby portrayed a vamp character in Vitagraph’s The Reincarnation of Karma that same year. A couple other dark-haired femme fatales show up here and there to threaten heroines like Pearl White. And then there’s the matter of Alice Eis and Bert French recreating their vaudeville dance in The Vampire (1913), starring Alice Hollister!

But after she shot to stardom in A Fool There Was (1914), Theda (quite naturally) continued playing a string of vampire roles with her signature dark hair and heavily made-up face. By the filming of The Devil’s Daughter (1915) the crew was cheerfully nicknaming her “vamp.” Once a reporter found out, “vamp” became a part of the American lexicon.

Other vamps began popping up onscreen, usually with the slightly gothic appearance that Theda made familiar. Here’s the mysterious, lavishly-gowned Valeska Suratt, and Valeska Suratt’s hat:

And here’s the feisty Musidora, a French actress best known for her role in Louis Feuillade’s Les Vampires serial (where this pic comes from):

The talented Louise Glaum was nicknamed “The Spider Woman” or “The Tiger Woman,” and was praised for her work in vamp roles:

Virginia Pearson was William Fox’s “second-string Theda Bara,” shown here with a third- or fourth-string skull. Pearson was allegedly under contract as a threat to keep Theda from getting too uppity: 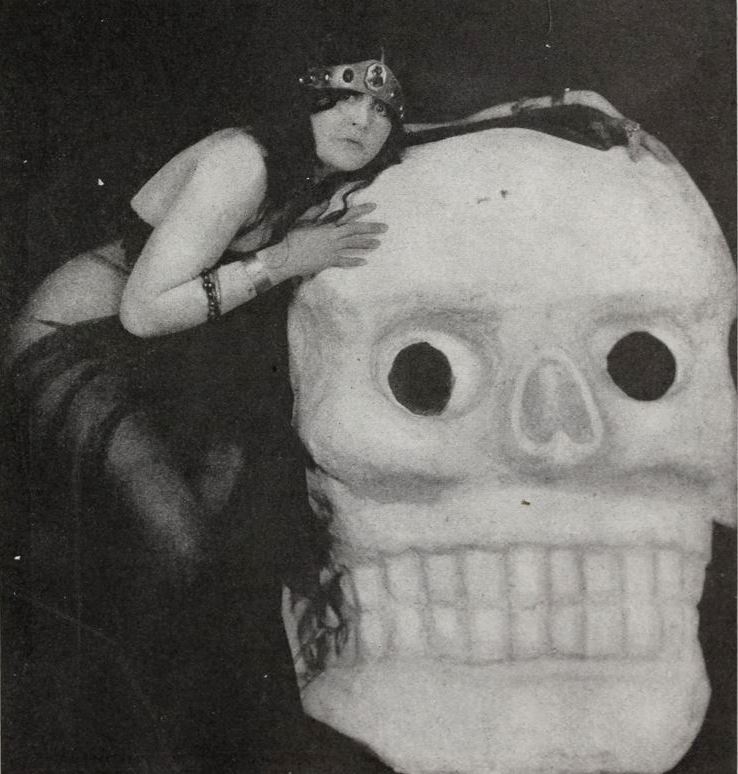 Here’s the “darkly beautiful” Nita Naldi, who acted alongside leading gents like Valentino: The British-born Olga Petrova, all dolled up and ready to seduce:

Jetta Goudal, a vamp from the late silent era who was very successful in DeMille productions: And we can’t forget Pola Negri! 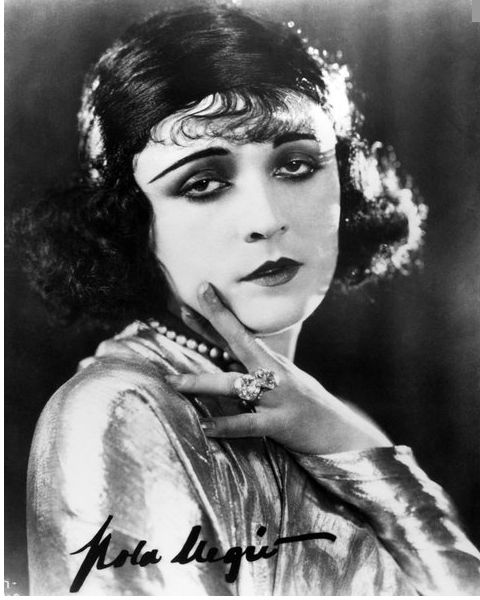 Even Hedda Hopper, best known as the gossip columnist who always wore flamboyant hats, was once known as a vamp. Hedda Hopper.

We all know that Theda Bara was committed to her melodramatic image (the silly stories about her being born in the shadow of the Sphinx were all part of the fun), and so were the other vamps. They freely gave out beauty advice and discussed how they found inspiration for their villainous roles. And thus we have Theda explaining: “The hawk has taught me how to prey and how to be crafty, and then how to swoop down suddenly and seize my picture victim while he is still hesitating,” and Virginia Pearson stating, still in character: “I never waste time. When I see what I want, I go after it.”

What attracted audiences to these vamps, to the point where they were showing up in comedies and cartoons? The usual explanation for their popularity is that vamps challenged the expected social norms–they were overtly sexual and aggressive, and thus symbolized the consequences of women going wild. Well, okay. I guess. (On that same note, I once saw someone argue that Edwardian men thought the attractive, sensual vamp bent on seducing men was simply too frightening to stand, which made me wonder if that person had ever met an actual man.) Still, femme fatales do date all the way back to ancient myths (think Helen of Troy). We might see vamps as the newer incarnation of a familiar stock character, with the magical new medium of film adding extra allure and making them readily familiar to audiences around the world. The slightly “foreign-looking” dark-haired vamp was in tune with the trendy interest in all things exotic, and their “supernatural” side fit in with the interest in spiritualism. With their air of mystery and fancy clothes worn like trophies of their conquests, vamps were simply thrilling, both to women and certainly to men. Writer S.J. Perelman wryly recalled: “For a full month [after seeing A Fool There Was] I gave myself up to fantasies in which I lay with my head pillowed in the seductress’ lap.”

“Vamp” seemed to lose its quasi-supernatural connotations over time, coming to simply mean any “femme fatale,” as in the case of the homewrecker in Sunrise (1927). When the sleek, slangy heartbreakers of the 1930s started showing up, the brooding vamps began to look more and more dated. In 1933 Theda said, “the wickedest thing I ever did on the screen would seem tame now.” And that was all the way back in 1933.

And yes, vamps seem even more tame today, to say nothing of old-fashioned. They came from an era at home with florid poetry and mystical tales, when people were still careful to maintain their reputations. Still, if we look around at every rebellious teen’s phase of heavy eyeliner and the never-ending fascination with all things gothic, maybe those silver screen vamps aren’t quite as impenetrably dated as we’d think.