When I find myself not liking a film, it’s usually because it just isn’t my taste, or because I find it boring. Maybe the subject matter doesn’t interest me, maybe it’s poorly made, or maybe there’s way too many giant robots and the stupid things all look practically the same.

But then there are a few films, a very very few films, that not only aren’t to my taste but make me want to stand up, grab my little flat screen TV, and throw it straight through the wall. L’Inhumaine (1924) is one of those films.

Yeah, you heard me.

And that’s all, folks!! Join me for my next post as we discuss…as we…discuss…sigh…fine. Maybe a few people out there will find L’Inhumaine somewhat tolerable, so I guess I’ll give it an overview.

Knowing the background of this film is essential, so let’s start with that. The director was Marcel L’Herbier, a native of Paris, writer, poet, playwright, critic, and maker of films that flirted with experimental techniques. In the early 1920s he was asked by an opera singer friend, Georgette Leblanc, to direct a film starring herself. He agreed, and swiftly decided that the film would be a hugely ambitious, cutting-edge artistic experiment that would knock the socks off the intellectual world (and hopefully regular audiences too).

Famed architects, set designers, sculptors, and costumers were brought on board. A percussion-filled score was commissioned. And for the scene of a riot at a real Paris theater (well, a riot involving standing and “most unorthodox!” gesturing), L’Herbier invited around 2000 society folk to fill the seats. Pablo Picasso, Man Ray, and James Joyce were said to be among them.

So what was the result of this grande expérience? Well…

At each screening, spectators insulted each other, and there were as many frenzied partisans of the film as there were furious opponents. It was amid genuine uproar that, at every performance, there passed across the screen the multicoloured and syncopated images with which the film ends. Women, with hats askew, demanded their money back; men, with their faces screwed up, tumbled out on to the pavement where sometimes fist-fights continued. (Jaque Catelain présente Marcel L’Herbier, p. 82)

Yeah, my hat would’ve been askew too.  Watching L’Inhumaine is like trying to walk through a beautiful meadow only to find your pants are getting covered with itchy, irritating burrs–burrs that demand you consider the philosophical meaning behind the itching, plebeian.

Leblanc plays Claire Lescot, a famous opera singer living in the most modern of homes, who throws expensive parties where her exclusively male guests all vie jealously for her attention (by the way, folks, this film was Leblanc’s vanity project). However, even though she can have her pick of any wealthy/powerful man she wants, the “inhuman woman” Claire doesn’t care. She remains heartless, full of mockery, aloof. She taunts her feverish admirers, ha ha hee!

And she forces her servants to wear creepy masks. (Yes, I’m serious.)

One of the admirers is Swedish scientist Einar Norsen (Jacque Catelain), who’s clearly at least twenty years her junior if not more. Er, one of the weaknessses of L’Inhumaine is that Claire is obviously a heavily made up fifty-something still very much in favor of old-fashioned stage poses. She seems stiff and uncomfortable in front of the camera. We accept all the men’s obsession with her because the film wants us to, not because we necessarily believe it (what could a fab temptress like Pola Negri have done with Leblanc’s role?).

Anyway, Einar makes his passion known to Claire but Claire don’t care. He leaves in a wild state of mind, and apparently plunges his automobile off a cliff. *SPOILERS*, because I guess: Claire is told that Einar has ended it all, and her reaction is “meh.” At her next big concert, the entire theater becomes outraged by her coldness and a near riot takes place. She visits the morgue where Einar’s battered body is lying, and finally becomes filled with guilt, confessing that she did care for him. Einar melodramatically appears–he is alive, and had staged the whole thing!! They shall now be in love, because that’s not strange at all.

One of Claire’s admirers, a maharajah, grows jealous of her romance and decides she must pay. He arranges for a poisonous snake to bite her, and amid much histrionics she dies.

But! Einar is a scientist, remember? (And you thought that detail wouldn’t come in handy.) He uses his incredible science powers to…I’m not kidding…bring her back to life, because the love, it is so strong. THE END!! *END SPOILERS*

Have you ever seen someone strain to, say, light a very tall candle? (I’m not the only Catholic here who’s watched altar boys do this before Mass starts, yes?…Maybe?) And the darn thing just…won’t…light, and you feel yourself squirming with impatience? That’s how at least 40% of  L’Inhumaine makes me feel. (And the Alloy Orchestra score certainly contributes.) 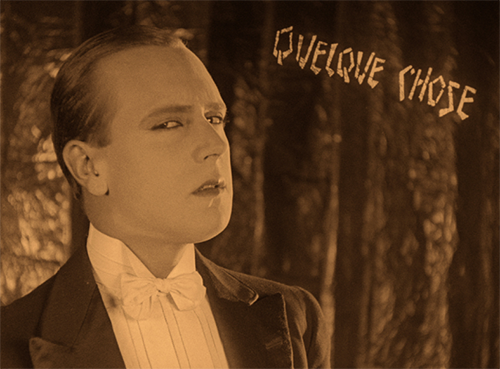 And then the film further infuriates me by layering pretentious titles over the shot.

This is one of several scenes where characters dink around as the clock ticks by with agonizing slowness, for no clear purpose than L’Herbier presumably feeling it’s artsy. For every intriguing decision he makes–like the camera setups in Claire’s stupendous home or the Abel Gance-style montage at the end–there’s a host of odd ones, such as using three separate shots that dissolve into each other just to show Einar driving away in his car. Or subsequent shots using dissolves that are maybe trying to show Einar’s agitated state of mind, but are delivered so ploddingly that you’re not sure if you’re supposed to feel tense or contemplative. It’s all a good 40 minutes too long.

I shall distract myself by trying to figure out what I’m looking at.

To its credit, and out of begrudging fairness,  L’Inhumaine truly is an eye-popping example of art deco. It shows off a level of stylization that you rarely see from films that aren’t German Expressionist. Every corner of the frame is used, and light and shadow play as big a part as scenery and paint. The actors may be stiff, but at least they’re posed amid stunning shots that often look more like Cubist paintings than scenes from a film. The gallery-ready title cards also show modernist flair.

There are surprising sci-fi elements too. Einar debuts a new invention that mixes television with radio–folk around the world can hear Claire sing, and she in turn can watch their reactions on a screen. (Yes, the technology makes no sense.) Could this be the earliest depiction of television, a few years before Metropolis? Perhaps, although it wouldn’t surprise me if an unassuming little lost French comedy from the 1910s had tried out the idea first (“The eccentric neighbor debuts his invention,” the title card would say).

L’Inhumaine of course lends itself to plenty of florid interpretations, wherein the Emperor’s clothes are scrutinized thread by thread. “The characters, you see, are supposed to be flat and unappealing, because they are but cut-outs who point a warning finger at the facile cliché of the ‘character,’ but mere marionettes dancing fitfully to the remorseless string jerks of the omnipresent writer-puppeteer, but–” Oh come on, this was Georgette’s big vanity project, remember?

And hardly any effort went into it at all.

I’ll argue that there’s avant-garde that works, and (much) avant-garde that fails. Ghosts Before Breakfast and Ballet Mécanique work. Menilmontant absolutely works. The Expressionism-gone-mad Von morgens bis mitternachts tries, but ends up drowning itself. A film can look good and go through “experimental” motions, but that doesn’t mean it’s a great film.

How to put your finger on what succeeds and what doesn’t? Hmm, well, let’s say you took someone who doesn’t watch anything avant-garde, explained the background of an experimental film and the intentions of a film’s creators, and then had him watch it. If he responded with a mildly enthusiastic “Yeah, I can see that, that’s…interesting,” then the film probably works. If he watches a bad avant-garde film and then looks at you wondering what on earth you could possibly want him to say, then the film probably fails. Not a rock solid example, but it’s all I’ve got. 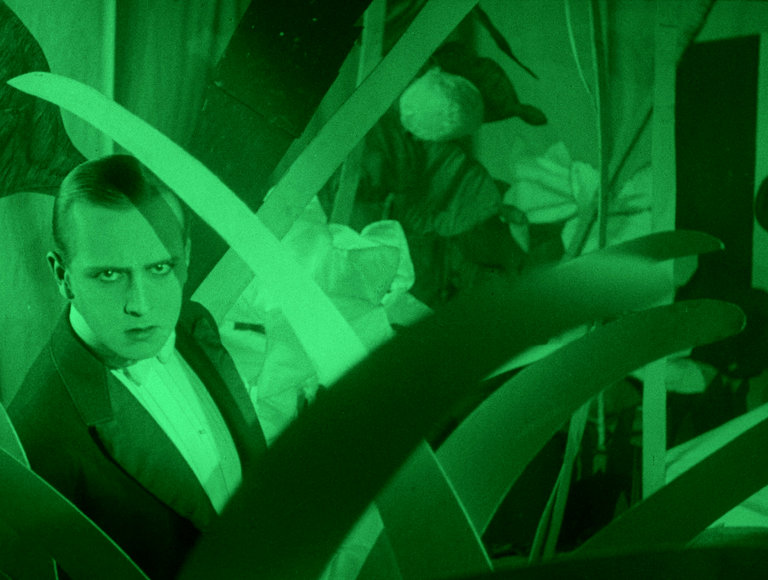 L’Inhumaine could’ve been magnificent. Perhaps if it had lead actors with the presence to hold their own amid those busy Cubist sets, and quicker, tighter editing. As it stands, it’s an ambitious visual feast soured by a silly plot and lifeless characters. It lacks the conviction and purpose of better experimental films, settling for a hodgepodge of experimental techniques to try and force in meaning. It could drown an ox in its pretentiousness. And it will forever be doomed to the niche of very obscure art films that inspire reviews like this one, found online:

There’s a clipped, abstracted poetry to the telling of this story that defies the geometric constructs of the plot these characters are confined in. It’s a poetry spun from, and around, every sequential corner of this marbled tale; existential musings on the nature of art are dispensed in the brooding monologues while guilt complexes and Freudian desires are expressed in feather-boa dramaturgy. Beneath its art deco style-guide, L’inhumaine proves to be a story of inspiration and daring.

Nah, the story stinks. But the film certainly is cool to look at. 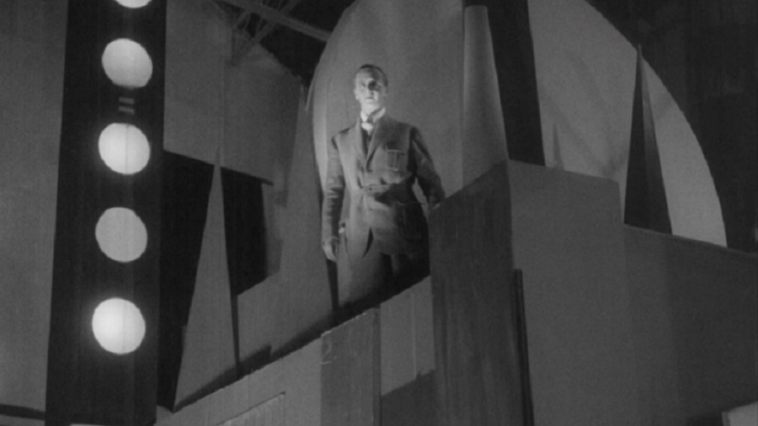