What more can I say? It’s epic, it’s operatic, it’s a triumph of the imagination, and its art direction is second to none. Sci-fi, religion, surrealism, allegory, expressionism, fantasy, drama, dreams–it’s all here, and once you see it you’ll never forget it.

I’m obsessed with the Comique shorts, so choosing my favorite is like a mother having to choose a favorite child. They’re all so fresh, so unpretentious, so hilarious and full of energy, that I nearly rent my garment with despair. But this one gets a little edge for that fantastic scene where Buster and Roscoe “flirt” in the hallway (err, it makes more sense in context).

A milestone piece of Americana worthy to be ranked with The Adventures of Tom Sawyer and your grandmother’s apple pie recipe. A simple, dramatic David-and-Goliath story with a small cast of vivid characters and an idyllic rural setting–it’s tailor-made for me. Chaplin’s beautiful, gritty, heartstring-tugging masterpiece. I might call it his greatest film. He took his comedy to a new level, inspired by his actual life experiences. It doesn’t have the self-consciousness of some of his later work. Plus, the reunion scene between the Tramp and the Kid never fails to turn me into a blubbering mess.

Pure poetry, blended with harsh realism. And by the way, Lillian Gish is the First Lady of the cinema.

This film just stuns me–its style, its boldness, the plot of the old tale that taps into nothing less than the eternal struggle of good vs. evil…a masterpiece. I love Murnau’s Nosferatu as much as the next person, but will give Faust a slight edge. 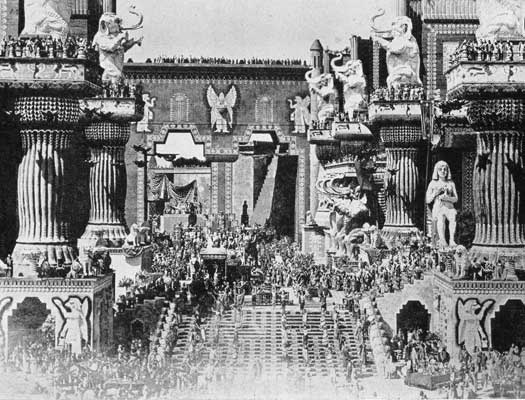 One of the grandest spectacles ever put on film, now and forevermore. I love its ambition, its huge cast of characters, its grand themes, its attention to detail–everything about its big beautiful bloated self.

This pastoral tale encapsulates so much of what I love about the silent era. It’s both a nod to an old-fashioned time gone by while being charmingly old-fashioned itself. It’s sweet and sentimental, but never cloying. The cinematography of the rural setting is simply lovely. And Lillian Gish, Bobby Harron and Clarine Seymour are every bit as talented and sympathetic as they were back in 1919.

Just for the pure heck of it, here’s my next ten favorite silent films (a list that’s somewhat eccentric):

So! What about you? What’s your top 10 favorite silents list?