Well over a century old and only over a minute long, Un homme de têtes is one of Georges Méliès’s earliest and best-known works. I think the French title literally translates to “a man of heads,” but we know it today as The Four Troublesome Heads. Either way it’s one of your oddly blunt 1890s silent film titles. Classic 1890s cinema, am I right? Haw!

The Four Troublesome Heads is a nice intro to Méliès’s talent and goofy sense of humor. I feel like I can show it to almost anyone–the special effects hold up amazingly well and people get a kick out of what an oddball it is. Plus, you can dismiss the usual critique “but it’s so primitive” with “Well doi, it was made at the end of the 19th century!”

Man, just think of that–this was filmed in the 19th century. Everything you see on the screen, the people in the frame, the clothes they’re wearing, the furniture decorating the sets, all of it’s from an era many of us only know from books and posed portraits. It’s reality, preserved for us forever. Victorian cinema never fails to give me a thrill! So with that in mind let’s take a look:

The Four Troublesome Heads is, quite clearly, a one-shot film simply showcasing an “illusion” by Méliès himself. As you know, he was a stage magician for quite a few years and his interest in stage magic really excited him about the possibilities of film. At last, he could perform illusions far more elaborate and surreal than was possible on the stage–such as making talking duplicates of his own head and trying to make them sing. A creative brain, he had.

Nowadays it’s pretty easy to guess the techniques he used. He used substitution splicing, a.k.a. stop-substitutions a.k.a. stop-tricks, every time he takes off his “head.” This meant stopping the camera and placing a dummy head in his hands and what appears to be a dark cloth or bag over his real head. The multiple “heads” were photographed using the wonders of the multiple exposure and split-screen techniques. 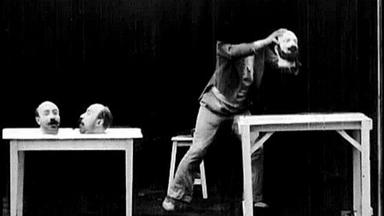 Méliès had used substitution splicing earlier in The Vanishing Lady (1896) and the lost The Cabinet of Mephistopheles (1897), but this is his most elaborate use of the effect so far. Other filmmakers, at least George Albert Smith, had also tinkered with these kinds of effects, but Méliès was probably the most fascinated by their many possibilities.

And hands down he had the keenest sense of the fun and wonder of film. In The Four Troublesome Heads he performs with infectious energy, and even his special effects have personality. I love how the three “other heads” happily look around and jabber away. Look at how the two on the left table start chatting with each other–this was very tough to do, since Méliès would’ve had to rewind the film several times to capture his different performances while remembering his exact expressions and movements in the previous few seconds. Remember, this was over two decades before performers such as Buster Keaton would try doing the same thing. Geez, this film is old!!

Do these special effects seem primitive to us today? Does it seem weird to bother asking such an obvious question? Well, sure, but let’s stop and think for a minute. Yes, we can achieve any effect with CGI…but as detailed as it can be, is it always 100% convincing? Do we forget that CGI isn’t real life, or is it often the opposite case? I don’t know about you, but when I look at Méliès’s effects, done entirely in the camera with care and precise timing, I get a little bit more wonder than I do watching the Marvel movies (and I am a big fan of the Marvel movies).

Lastly, here’s another thing I like to think about–when Méliès successfully captured himself interacting with the multiple heads, and was watching the footage of these effects for the first time, can you just imagine how excited he must’ve been?

Note: For some silly reason the IMDb page for this film calls it Four Heads Are Better Than One, which is the title Siegmund Lubin used when he copied it (i.e. stole it) and illegally re-released it in 1903. Méliès would probably rather see it listed as A Man of Heads.