One of my very favorite Georges Méliès films is Les Quat’Cents Farces du diable, literally translated as The 400 Tricks of the Devil. We just call it The Merry Frolics of Satan (1906), which is a title truly of its time. So is the film itself, but that’s why I love it so much.

While not as widely discussed as A Trip to the Moon and more familiar from clips turning up in documentaries on early cinema, it’s one of Méliès’s most elaborate works and a real treat for the eyes. Its plot can be…quite mystifying even if you’re paying close attention, so here’s a detailed recap (I believe some of the information originally came from the Star Film Company’s catalog):

Merry Frolics is supposed to be a “modern” (in 1906) comic version of the Faust legend. Engineer William Crackford and his assistant are hoping to take a trip around the world. Out of the blue they’re invited to the laboratory of Alcofrisbas (who was apparently named by alphabet soup), where they’re amazed to see him magically move and transform furniture. Alcofrisbas cooks up some magical pills that grant wishes when you hurl them to the floor. Crackford gets so excited that he signs a contract for the pills without reading it. Naturally, it turns out he sold his soul to the devil–Mephistopheles. (Who is of course played by Méliès himself.) 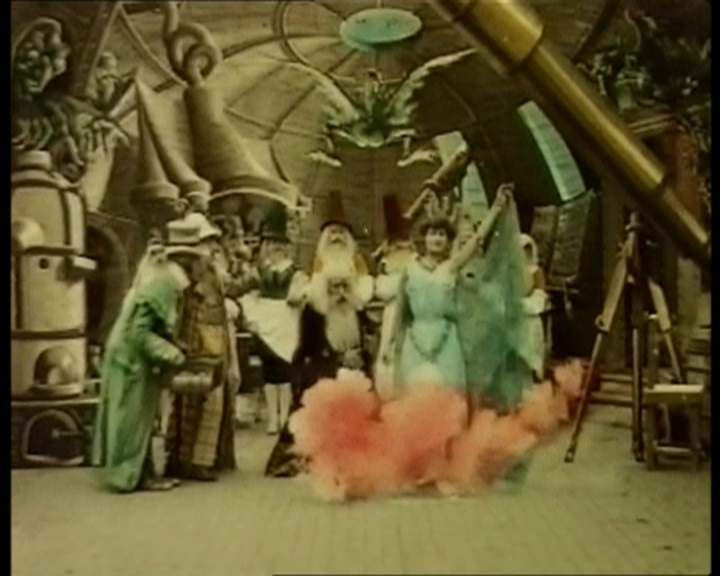 Returning home, Crackford tries out some of the pills in front of his family, which results in the house becoming filled with magical servants who bundle the Crackford family into trunks and turn the trunks into a tiny, magical train (you’ll just have to watch the film). Crackford happily drives off–the journey around the world has begun!

The train doesn’t last long, however (plus the townspeople make fun of the silly thing) and Crackford and his assistant decide to stop at an inn. Unfortunately, it’s run by Mephistopheles, who wreaks havoc until the two flee in a horse and buggy. Mephistopheles transforms their buggy into a “infermal carriage” pulled by a strange, skeletal horse, and chases them to the summit of a volcano. An eruption blows their carriage into space, where they continue their bizarre journey among the stars and planets.

Words, of course, can only go so far to describe the uncanny nature of this film, as odd as a dream caused by a bad sandwich and as lovely as a Victorian postcard. My main reason for loving it with an undying love is this:

That glorious, surreal ride through star-spangled space! The sight of that skeletal horse-puppet with his legs swinging away is enough to cure any blues, in my opinion.

While researching Merry Frolics I stumbled across this review, which raises some points shared by other critics of Méliès’s post-A Trip to the Moon work:

…Méliès, unfortunately, also seemed to be relying more on theatrical tricks and less on cinematic ones as he had in his earlier spectacles. Stop-substitution splices and multiple-exposure photography remained the basis for his single-scene trick films, but his longer multi-scene fantasy adventures seemed to be becoming increasingly theatrical. The preference to use trap doors in this film instead of stop-motion and editing for appearances and disappearances seems to evidence this increased theatricality.

A fair review. Méliès did seem to fall back on familiar stage tricks as the years went by. But did Merry Frolics spring forth entirely from Méliès’s imagination? Were there other reasons he might’ve wanted to be more theatrical than cinematic? A little research reveals that the film is indebted to a stage play–and was part of one, in fact.

Les Pilules du diable, a féerie play, was first released on February 16, 1839. It became a popular classic, revived often throughout the 19th century. In 1905 Victor de Cottens, director for the famous Paris music hall Folies Bergère, staged Les Pilules du diable at the Théâtre du Châtelet. He gave the well-known story a satirical edge and hired Méliès to create two film sequences to be projected as part of the show. (An “actors go offstage and their adventures are shown onscreen” sort of deal.) Méliès would incorporate one of the sequences,  Le Voyage dans l’éspace (The Space Trip), into his Merry Frolics of Satan–filmed six months later.

Fun fact: the scene set in the inn’s kitchen is a reproduction of the traditional set and special effects that had been used for Les Pilules du diable since 1839. If you have any French blood, you’re seeing something your ancestors might’ve watched on a Paris stage many generations ago.

So while it’s true that Méliès would often resort to tried-and-true stage techniques in his films, it may be because at times they were literally meant for the stage.

Take a look at The Merry Frolics of Satan below! And to see it in its clearer glory, I highly recommend Flicker Alley’s magnificent Méliès set.

Hope you enjoy it as much as I do!