Sometimes one of today’s films will take you by surprise. Judging by the trailer, you expected it to be pleasant and entertaining enough, but it turned out to have more depth than you’d thought. When it came out on DVD you ended up buying it, and found yourself re-watching it from time to time. One day you realized it’s become one of your go-to classics.

Released during the brief Silent Film Awareness Renaissance of 2011 (when The Artist won Best Picture, remember), Hugo was a film that took many people by surprise. For one thing, it was a magical 3-D family film by Martin Scorsese, of all people, creator of Raging Bull and Gangs of New York among many others. And contrary to what the trailers implied, it was a little less about the boy Hugo himself and more a tribute to the life and work of Georges Méliès.

Hugo (Asa Butterfield) is a boy who lives in the Montparnasse train station in Paris in the 1930s. His father had died in a tragic accident, leaving Hugo in the care of an alcoholic relative who tends clocks in the train station. When the relative vanishes the mechanical-minded Hugo secretly takes over his job. Among his few possessions is his father’s broken automaton–an intricate mechanical man–which Hugo is determined to try and fix.

Between his work on the clocks and tinkering with the automaton, Hugo observes life in the busy train station and carefully avoids the bumbling station inspector (Sacha Baron Cohen). He befriends a girl named Isabelle (Chloe Grace Moretz), a book lover always ready for an adventure. She introduces him to her grandfather (Ben Kingsley), who sells toys in a booth in the train station. Hugo shows her his father’s automaton, and in time, the automaton reveals a secret that connects their two worlds in a way they had never imagined.

The first time I watched Hugo the story pulled me in hook, line and sinker (I had never read the novel it was based on). What was the automaton trying to write? What were the sad memories the old man was trying to forget? It was all an intriguing mystery, and it had a surprising and unique payoff.

Among the many things I appreciate about Hugo–the acting, the sets, the soundtrack–high on the list are the warm, bright, inviting colors that pervade the movie, rather than the usual “gritty” tones and filters that Hollywood is so fond of currently. Even darkened scenes have a bit of a glow to them. Somehow, Scorsese’s masterful use of cinematography and color make this Paris train station as inviting as your usual little French village. And best of all, Scorsese pays a perfect tribute to Méliès. Lovers of early film history will die when they watch this film. Scorsese replicates Méliès’s Robert-Houdin theater, the famous glass movie studio at Montreuil, and shows him at work filming some of his famous scenes. The wacky costumes, the giant puppets, the hand-painted scenery–we get to see how it all might’ve looked in real life. (I envy the folks who got to research all the details for these scenes!)

Film lovers will also appreciate the many nods to silent cinema history, shown in series of clips as the two children research in a library and attend a showing of Safety Last (Hugo also dangles from a clock briefly a la Harold Lloyd). I never saw Hugo in a theater, but what fun that must’ve been to see clips from The Kid, The General, Les Vampires and more played to a regular, unsuspecting audience.

Are there any weak spots in this modern classic? Perhaps. At times the story moves a little slowly, especially for a movie meant partly for children. There was also the decision to have Hugo wake from a nightmare not once, but twice–a double fake out. The first time was amazingly effective (re-staging one of the most famous train wrecks in history), but the second felt gimmicky (and a little creepy). But really, I’m nitpicking here.

Maybe some of you are wondering: just how accurate is this movie in depicting the life of our Georges Méliès? Pretty darn accurate, in fact. While Scorsese does have to simplify the story of his career, the basic details are true–his career really did go downhill during WWI, he really did burn many of his remaining sets and props, and he really did end up selling toys in the Montparnasse train station. He did have a granddaughter who lived with him and his wife. (One detail they left out for obvious reasons was that his wife was formerly his mistress of many years–har.) And yes, Méliès really did own several automatons during his theater days, which unfortunately were thrown away after sitting in storage for a time in a Paris museum.

The grumpiness of Ben Kingsley’s Méliès, although it makes dramatic sense, is also a little inaccurate in my opinion. In real life Méliès certainly lamented the fall of his career. In a letter from 1932 he stated, “I, at 67, a merchant! I who was always an artist first and who always detested business! What is there to do!? Life has reversals like this…[One must] resign oneself, and that is what I have done.” But he didn’t give himself over to bitterness. His granddaughter Madeleine later recalled:

But much like my criticisms of Hugo above, this is a nitpick. And again, it does make sense dramatically.

The inspiration for this unusual fable was the novel The Invention of Hugo Cabret, by Brian Selznick. A combination of traditional and graphic novel techniques, it took two years to write and nabbed Selznick a Caldecott medal. Ever since seeing A Trip to the Moon he had been interested in the story of Méliès, and after about ten years of filing away tidbits of information he decided to put it all into a novel. The look of the automaton in the story was partly based on a real automaton at the Franklin Institute in Philadelphia. Having been broken long ago, it was in storage when Selznick inquired about it. Happily, Selznick found a talented mechanic who repaired the delicate machine. 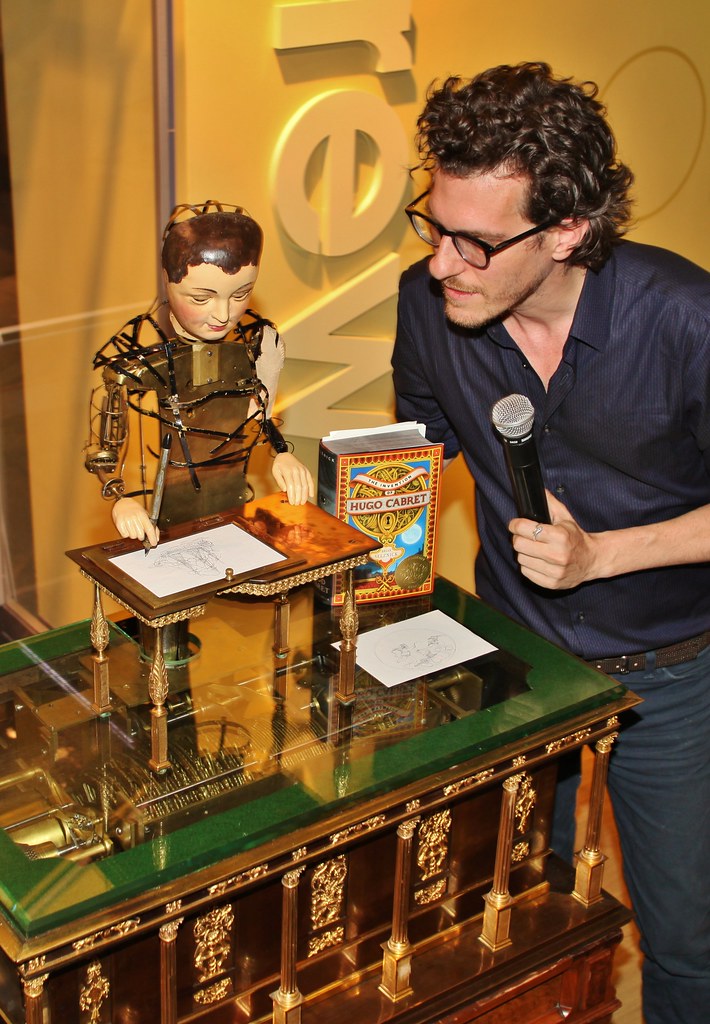 So just in case we aren’t clear, I can’t recommend this movie enough, and absolutely regard it as one of my personal go-to classics. As I recall, although it was released to much acclaim not everyone was expecting it to be an ode to film preservation. But to me, that makes the movie all the stronger. It lingers in my mind when a dozen “adventure” films have been forgotten.

So a hearty thanks to Martin Scorsese for this fine ode to early cinema. Imagine how flattered Méliès would’ve been to see his life and work–his devotion to dreams–put on such a worthy pedestal.

The quotes used in this article come from these two sources: