People talk about how everyone is six degrees of separation from Kevin Bacon. Well, I’m here to tell you that as far as cinema history’s concerned, everything’s six degrees of separation from Georges Méliès. Maybe three degrees. If there’s a film trope, storyline, or special effect that you’re trying to trace to its origins, I say give up right now, and just assume it’s Méliès. And by way of demonstration, here are at least six things the French wizard seems to have put on film before they were a twinkle in anyone’s eye. 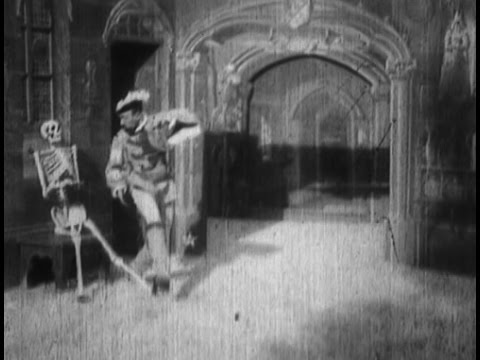 The jury’s still out on what counts as the first ever horror movie–it may be The Execution of Mary Stuart (1895) showing the queen at the executioner’s block. (Or could that be considered an early biopic? Hmm.) But as far as a film including ghosts, skeletons, and other recognizable horror movie components? That would be The Haunted Castle (Le Manoir du Diable, 1896). There are even sheet-wearing ghosts. Méliès seemed to realize almost instantly how the big screen could be the perfect vehicle for giving people the creeps! Yes, the first film version of this classic fairytale came to us courtesy of Mr. Méliès. It may also be the first filmed fairytale in general, not counting films with fantasy elements such as Alice Guy-Blaché’s The Cabbage Fairy (La fée aux choux, 1896). Being a jaw-dropping 5 1/2 minutes long with six separate scenes (well, this was big back in the day), Cinderella was the first Méliès “superproduction,” and was so popular that he felt confident about making more lavish, long-ish films. You might say that without Cinderella, there may not have been A Trip to the Moon!

Note the use of dissolves–according to historians, this was the first time a filmmaker used them as transitions. If anything, you should watch Cinderella for the “clock scene,” which is brief but easily the most memorable part of the picture.

Although you could probably also call it, ahem, plagiarism, Méliès’s very first film is a remake of a Lumière film from a year earlier. Card Party or Une partie de cartes (1896) shows just that, several men playing cards and ordering drinks. The main difference is the slightly broader acting (plus one of the men is Méliès himself). You wonder if Méliès thought, “Why pay for this film when I can just make it myself?” Which is all a bit ironic, considering that in the years to come he would find himself fighting against countless competitors pirating his work. 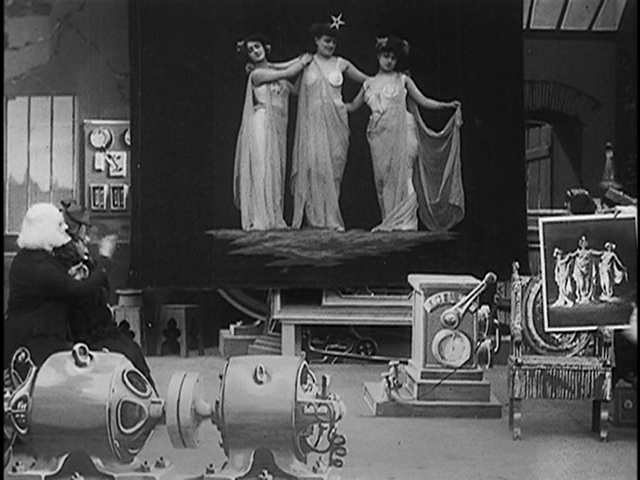 That’s right! A couple decades before it was invented and years before similar depictions in Metroplis or L’inhumaine, a version of television showed up in the Méliès short Long Distance Wireless Photography (Photographie électrique à distance, 1908). (I’m starting to think he was some kind of prophet.)

The plot concerns an inventor showing off a machine that can photograph people and then project a moving image of their “true selves” on the screen. An older couple comes in for a demonstration, and the wife’s image is smiley and cheerful, but the husband’s? Well, you might have to watch it for yourself.

2. Multiple exposures (of himself)

The most famous example of this intricate special effect was probably done by Buster Keaton in The Playhouse, but Méliès beat him to the punch twenty years earlier in The One Man Band (L’Homme-Orchestre, 1900). This is another one of his early, 1-2 minute delights, and while Buster and other comedians like Lupino Lane and Marcel Perez would use the same effects in elaborate ways, clearly Méliès was having the most elaborate amount of fun.

When we think of A Trip to the Moon, we’re reminded of those odd, lobster-like “moon beings” but did you ever realize that they were probably the first “Hollywood-style” space aliens ever put on film?

Their depiction has all the key elements of later sci-fi: humans arrive in a strange new world, they encounter bizarre, fierce extraterrestrials, one of the humans is kidnapped and brought to the aliens’ leader, he must fight them and escape to safety in a low-key action scene.

In fact, you could say that A Trip to the Moon itself is the earliest “Hollywood-style” sci-fi film (distinct from other early films with sci-fi elements). Maybe you could even say that it had the earliest “action scenes.” Which might mean that the actor involved is one of the first action heroes, and…

…You know what, I’m just going to make “Méliès Did It First” my new motto. That should about cover it.

7 thoughts on “6 Things Méliès Did First”