Georges Méliès made over 500 films, and while cinephiles are (ideally) familiar with at least a sampling of his huge body of work, A Trip to the Moon (Le Voyage dans la Lune) is the one film that made the Méliès name eternal. Strange that such a simple story, concerning eccentric scientists journeying to the moon and discovering strange landscapes and fierce moon-creatures, should still entertain us all these decades later. Or maybe this isn’t so strange. At the time, after all, it was one of the most elaborate films ever made, and even now in the 21st century it’s remained an impressive blend of special effects, eye-candy scenery, and gorgeous hand-painted color. 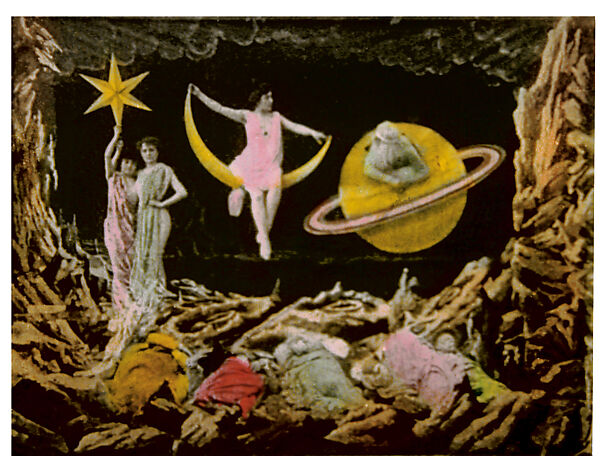 It’s lighthearted. It moves along briskly. It’s silly. There are no closeups. There are superfluous chorus girls in tights. The story doesn’t care about logic, preferring to stay squarely in the realm of fantasy–even with the theme of “scientific expedition.” Its breezy confidence might be why it holds up so well, despite being the complete opposite of everything we contemporary audiences have come to expect from the movies.

Today we’ll sometimes make fun of old films, wondering why on earth anyone took them seriously. A Trip to the Moon is honest with us, making no pretense of seriousness, aiming solely to charm and please. So naturally, today we tend to take it seriously.

Méliès hit a kind of artistic jackpot with this short, creating images that stick with us while dozens of others from 1900s films can fade. Take the most famous moment–the one you think of when you hear the name “Méliès”–the sight of the rocket ship striking the eye of the man in the moon. If you had never seen a silent film, you’d probably still recognize that image. Maybe we like it so much because it makes a familiar, whimsical idea so goofily literal–if the moon has a face, why not show it being struck by something? And why should correct proportions matter? And why not have some squirm-inducing goo drip down his irritated face?

But aside from its energy and quaint imagery, A Trip to the Moon is also somewhat symbolic. It was released at the beginning of the 20th century, that time of the turnover from the traditional horse-powered way of life to the machine age. It functions as a particularly endearing time capsule, not just of people and props from 1902, but of the aura of whimsy and romanticism that permeated popular culture at the time.

For Méliès and his audiences, “the moon” isn’t merely a rocky orb in the sky that we can see most nights of the year, but a poetic concept, an unattainable dreamworld where any strange landscape or bizarre creature could be possible.

What seems possible to us today? The moon, as we know from school, film footage and numerous photos, is really a giant rocky desert with no aliens in sight (the theories of some Internet sites notwithstanding). We can maybe pretend it’s actually a silvery landscape inhabited by pixies, but that of course is just make-believe. Make-believe is fine and dandy, as long as we make the line between reality and the imagination clear. We don’t want to sound too quirky.

Méliès’s most famous film contains a surprising gift to us: a preservation of the long tradition of poetry associated with the moon, and outer space itself. It comes from a time when audiences saw nothing strange or illogical about representing stars and planets with beautiful women. It captured the spirit of the féerie just before that spirit began to ebb away.

We still romanticize things like the moon at times, of course, as we always will. Art is eternally with us. But A Trip to the Moon is an exceptional example of the wonder and innocence that seems to have been lost somewhere along the road to our modern, heightened self-consciousness. Even those chorus girls in their white tights, waving happily to the camera, seem innocent and carefree.

So let’s thank our lucky stars that a seminal work like A Trip to the Moon is still here, forever ready to take us out of our comfort zones in the most charming way possible. And perhaps it can also remind us of the long history of people gazing up at the night sky, imagining themselves walking on that far-off, mysterious orb.