When I began writing book reviews I decided Silent-ology would be concentrated on nonfiction, with maybe a very rare exception for a well-written historical fiction novel. For one thing, silent fans are always seeking out nonfiction with good info about the era. Plus, I’m come to the sinking realization that I’m turning into one of those awful nitpickers who notices and actually kind of cares if a novel has some minor historical inaccuracies. (“It’s supposed to be 1917 and he just used a slang term that wasn’t popular until 1923? This shall not stand!“) It’s getting bad, folks.

But, as I said, there are those rare exceptions, and I dare say that Binnie Brennan’s Like Any Other Monday is one of them.

Brennan’s novel is set in the colorful 1910s world of American vaudeville, brought to life with a multitude of carefully researched details. It follows the career of “Boffo” Billy Pascoe, a star vaudeville comedian who’s forced to break up his family’s long-running act The Three Pascoes. Musing over his situation back home in Muskoka, Michigan, he’s talked into partnering with Lucinda Hart, a young dancer and singer who was formerly in a sister act. Although they’re very different performers, straightwoman Lucinda turns out to be a perfect complement to Billy’s style of ad-libbed parody. They work together to create the comedy act Pacoe & Hart, and as the audiences grow to love them, they grow to love each other.

If some of that synopsis sounds familiar, it should–Billy is strongly based on Buster Keaton. It’s peppered with references, from obvious ones (Billy’s parents Joe and Myra, the town of “Muskoka” standing in for Buster’s summer home in Muskegon, Michigan) and subtle ones that only a hardcore Keaton fan would know (like the fried perch, referencing a fish dish that’s still being served in a Muskegon restaurant to this day). And they’re woven so gracefully into the story that folks not as familiar with the great comedian’s life will be caught up in all the details. 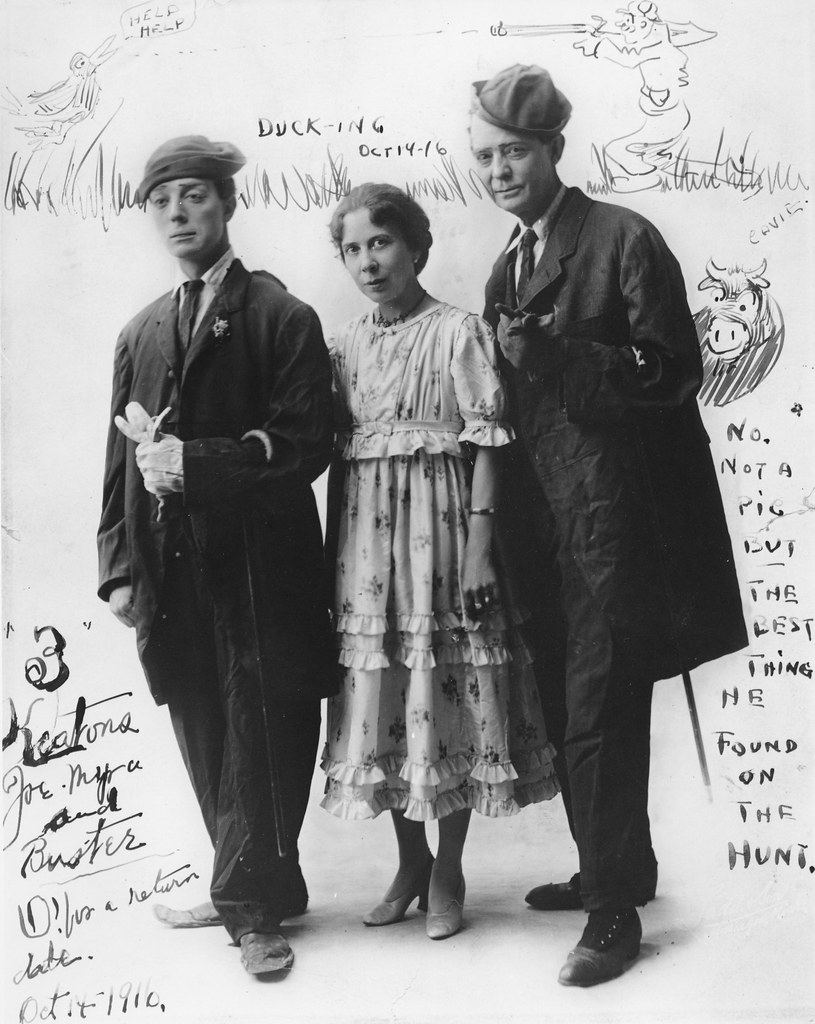 The real Buster in his family’s act circa 1916, about the year this novel is set. (And yes, this photo is freaking awesome.)

While Billy is still his own character, his story functions as a thoughtful homage to the great Keaton’s life and early stage career, with nods to his future career in film. Some touches are particularly inspired–the “ballet comedy” act Billy and Lucinda come up with sounds very much like something Buster would devise. And their romance is handled with taste and sincerity, blending it with the romance of performing on the stage. (If you had told me that a fiction book based on Buster featured a prominent romance with a young singer I might’ve been Very Suspicious, but never fear, this is no fanfiction.)

When it comes to today’s fiction set in the early 20th century, one issue I have is the way some writers attempt “authentic-sounding” period dialogue–usually accomplished by making characters slangy and smart alecky. Just like they sound in 1930s gangster movies! The main character could be an Edwardian seamstress with a quiet Lutheran upbringing and she’d still crack, “Aw baloney, ya big lug!” Now, I’m fussy about this because I’ve struggled with it myself. It’s very tough to pull off–you can recreate a couple lines you practically copied word-for-word from a 1914 newspaper and in your story it sounds ridiculous. Brennan, however, pulls off the period dialogue very well, recognizing that it’s not really about the slang but certain phrases and patterns of wording that people used back then. You can almost hear the particular cadences of their 1910s voices.

Like Any Other Monday is a treat for not only for Buster fans but for anyone who’s interested in early 20th century theater. I don’t know of many novels or stories directly about vaudeville (even though it was a huge entertainment industry that directly shaped our pop culture) so it’s refreshing to see a story set in that particular world. Brennan has clearly done her research, right down to the stage lingo. Some chapters are even replicas of newspaper blurbs or advertisements for various vaudeville shows (note Julian Eltinge and the Flying Escalantes listed on the bills!), giving us a kind of scrapbook view of the era. Which is also fitting since many performers would’ve kept scrapbooks back then.

The forward of Brennan’s novel states: “At the height of the vaudeville years, on any given show day, tens of thousands of performers took to the vaudeville stage working two, three, even five or more shows a day, six days a week. To these hard-working and talented men, women, and children, most of them now lost to history, I dedicate this book.”  Her love for that nearly forgotten era of vaudeville–and Buster–shows.

Like Any Other Monday was published by Gaspereau Press and is available on Brennan’s site and on Amazon.

10 thoughts on “Book Review: “Like Any Other Monday” By Binnie Brennan”