Today is the birthday of Florence La Badie (pronounced “LAH-bah-dee,” as she’d like you to know). She was one of our earliest movie stars, and was perhaps the first to pass away too soon.

“Fearless Flo,” as she was nicknamed, was born Florence Russ on April 27, 1888 in New York City. After her father Horace passed away, her struggling mother had to give her up for adoption when she was only three. She was taken in by Joseph E. and Amanda J. La Badie of Montreal, Canada, a well-off couple who gave her a good education.

As a young woman, La Badie obtained work in New York City as a model and considered becoming a stage actress. She won a small role in a 1908 play and then signed up to be part of a travelling theater company. In 1909 her friend Mary Pickford invited her to tour the Biograph studio. With Pickford’s encouragement, La Badie played a small bit in In the Window Recess (1909) and impressed the directors enough to be invited to return the following year.

She appeared in about 30 films for Biograph and then was coaxed away by the Thanhouser Film Corporation. She would appear in dozens of their films from 1911 to 1917, such as Dr. Jekyll and Mr. Hyde (1912), The Star of Bethlehem (1912), and The Evidence of the Film (1913). She become Thanhouser’s most popular actress, as well as one of America’s most recognizable stars. Newspapers and magazines reported on her willingness to do stuntwork and praised her fresh, timeless beauty.

“Miss La Badie…I wish that I could write an interview some day and tell the exact truth about people as they are.”

“You may about me,” she replied brightly, running a spatulate hand through the strands of her pale gold hair that the wind had loosened so that they fell over her collar in a wonderful loop of scintillant golden threads. “I am an Indifferentist. I don’t care what happens.”

“I should say you don’t!” I expostulated warmly. “Why, the trouble is, if I were to tell the truth, no one would believe me…Woman, think of my reputation!”

“Yes,” she murmured, rising and bestowing an azure glance from her eyes and a pearl and scarlet smile, “I suppose, poor man, you must consider your reputation. It is too bad. The thought of reputation keeps so many from having so many good times!” Unfortunately, in August of 1917 La Badie’s thriving career was cut short. While out driving with her fiance Daniel Goodman near Ossining, New York, the brakes on her car failed and the vehicle careened down the side of a hill. Goodman survived with minor injuries, but La Badie was thrown out of the car and suffered fractures to her pelvis. She would spend six weeks in the hospital. At first it seemed like she would recover, but then septicemia set in (blood poisoning). She passed away on October 13.

A bizarre myth swirls around La Badie’s sad death: the idea that she was actually knocked off by Woodrow Wilson himself to cover up a torrid affair they supposedly had. The theory is that Wilson supposedly sent a hit man to damage the brakes so they would hopefully short out at just the right time so the car would possibly crash or maybe roll down a conveniently-placed hill which would preferably result in La Badie’s death. (The theory has some holes.) This rumor was spread by Stardust and Shadows: Canadians in Early Hollywood by Charles Foster, which is one of those Hollywood Babylon-style textbook cases of how not to write a book about Hollywood. (And no, I’m not linking to any places to buy it.) Foster apparently found a reporter in his 90s who made the claims, but none of it is taken seriously by historians. Regular ol’ car accidents were simply very common in those days.

Although her adopted parents had been well off, for decades La Badie’s body lay in an unmarked grave in New York City, probably due to a legal connection with her birth mother Marie. Happily, in 2014 Ned Thanhouser, grandson of Edwin Thanhouser and ardent preservationist, raised money for a beautiful headstone. Heartwarming, to say the least. 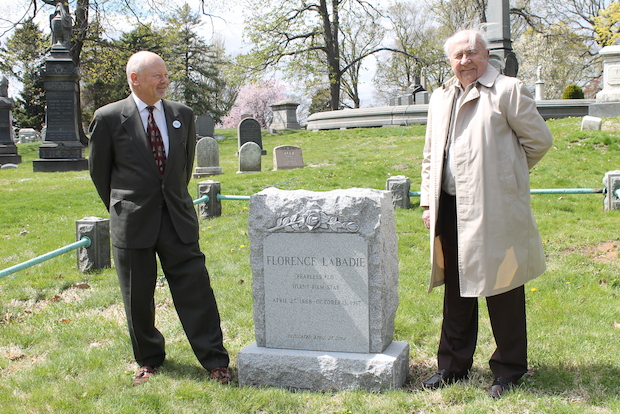 So happy birthday to you, Fearless Flo–and I hope you know that thanks to many silent fans and historians, you are most certainly not forgotten!