I’m guessing that many of you have seen silent films from a number of countries, like Germany, France, Italy, Sweden, and possibly even Japan. But have you ever watched one from Ireland?

Sure and there are Irish silents, indade! And they captured snapshots of traditional rural life in Ireland several years before the famous Easter Rising. Thanks to Trinity College in Dublin, several Irish dramas are available for your viewing pleasure on their official YouTube channel.

A few things they all have in common: all were filmed by U.S. companies, all were filmed at least partly on location, and all were very patriotic, pro-Ireland films that were respectful of the Irish themselves (being mainly meant for the large immigrant population in the U.S.). As such, they occupy an interesting niche in the era of film history when many theater audiences were full of immigrants.

Film number one is my favorite of the bunch. A young lad decides to leave his simple life in Ireland and seek his fortune in America. He bids goodbye to his sweetheart Eileene, who lives with (and looks after) her grandmother, and promises to return for her one day. He eventually achieves political success in New York and returns to Ireland just in time to save Eileene and her grandmother from eviction.

This Kalem short was directed by Sidney Olcott, the first U.S. director to film on location overseas. An Irishman himself, Olcott was perhaps the first to shrewdly observe that America had a huge Irish population who would probably enjoy seeing films set in ould Erin. Marketed as “Kalem’s Great Trans-Atlantic Drama,” this was the first film he made overseas and he was clearly excited to capture all the details of rural Irish life.  It’s a remarkable time capsule–we see peasants digging peat, the interior of a quaint thatched-roof cottage, and women “keening” at a character’s deathbed. Olcott would go on to direct a dozen more dramas on location around Cork and Killarney. 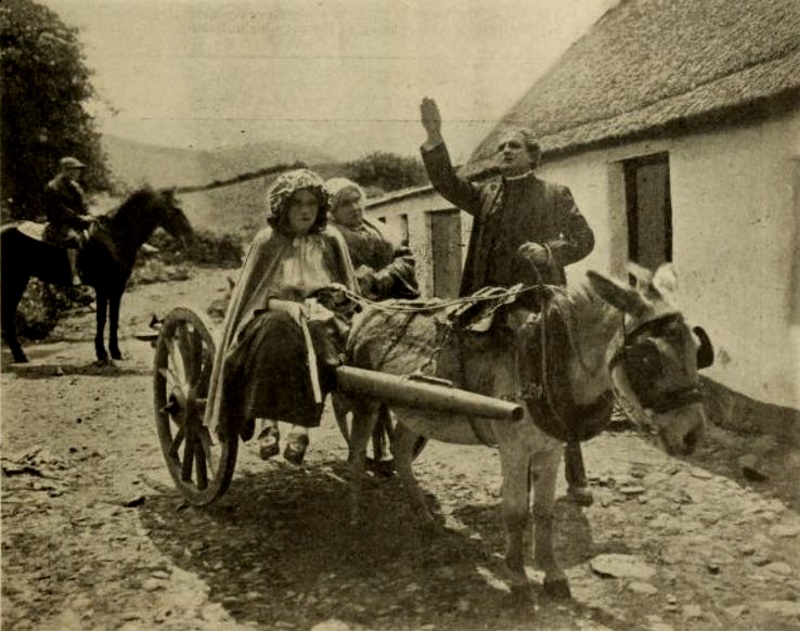 Rory O’More is an Irish patriot being pursued by English soldiers. He meets with his sweetheart Kathleen, but is spotted by the informant Black William. With the English hot on his heels, Rory tries to escape but is caught after he turns back to aid a drowning soldier. The soldiers’ captain, impressed by Rory’s bravery, wants to set him free but Black William insists on him being imprisoned. It looks like Rory is headed for the gallows, but maybe the courageous priest Father O’Brien can hatch a plan.

This was another Olcott-directed Kalem film, dramatizing a story by Samuel Lover. The acting in this film might not blow your socks off, but the glimpses of a thatched-roof cottage and some of those wild, rocky Irish landscapes will make you wish a clearer print had survived.

The beautiful estate Tore Cregan, home of the aristocratic Cregan family, is threatened by a hefty mortgage. The matron of the family, Mrs. Cregan, wants her son Hardress to marry the wealthy young Anne Chute to save the estate, but her plans are foiled when he falls in love with Eily O’Connor, the lower class “Colleen Bawn.” The two marry in secret, and of course much drama ensues–including a murder plot.

This is, yes, another drama by Olcott. The title cards boast of the authentic County Kerry locations whenever possible. The Colleen Bawn was popular enough to be re-issued by Kalem in 1914, when it also had a unique advertising campaign. According to the Trinity College website: “…Publicity by Kalem for the film announced that enough ‘real Irish soil’, which had been brought from the Colleen Bawn Rock, Killarney, was available to fill a box four feet wide, two feet long, and one inch deep and would be supplied with the film. Exhibitors were encouraged to invite their patrons to ‘Come and tread on Irish Soil!’, and ‘the multitude that respond will literally stand on Irish soil as they purchase their tickets’.” My favorite scene is probably in the very beginning, where the Irish villagers are having a dance that looks like it was copied from a vintage St. Patrick’s Day postcard.

Brennan O’Malley is the Irish highwayman version of Robin Hood. The film follows his adventures as he’s repeatedly captured and jailed, survives an attempt on his life, and is pursued by English soldiers (apparently a popular theme in these patriotic films). Will Brennan, with the aid of his love Betty, make a daring escape to the sea?

This three-reeler was directed by Edward Warren and released by the Solax Company. It’s based on the story of Irish folk hero Willy Brennan, an outlaw who was thought to have been killed by his enemies in either 1806, 1809, or 1812. He became a figure of legend, figuring in many mid to late 19th century Irish stories, poems and songs. If you’d like to get a glimpse of pop culture familiar to Irish immigrant audiences, you’ll probably find this film interesting. Brennan himself reminds me more of a staid mayor than a romantic Robin Hood figure, but I tend to forgive pre-1920 films for that kind of thing. I did get a kick out of the creative “bridge” Brennan and Betty use to make a daring escape.

Speaking of the running theme of Irish patriotism, this feature is about the struggle for Home Rule as seen from the viewpoints of brave Father Tom Murphy and Irish leader Robert Emmet. It reenacts various political and military events from 1798 to 1803.

Exteriors were filmed in Ireland and interiors in Twickenham, London. Interestingly enough, the first print bound for Ireland sank with the Lusitania on May 7, 1915. While it has quite a few inaccuracies (the real Father Murphy passed away two years before the events in the film are supposed to take place) the film contained just enough nationalist pride to make English military authorities in Dublin uneasy, causing some footage to be censored or removed.

I hope you’ve enjoyed these glimpses at the kind of Ireland many of us only see in old pictures and postcards. And if you’re of Irish descent (like me!), I hope that you’ve not only enjoyed them, but were perhaps inspired to introduce them to a few of your relatives. *wink*

To read more details about these films, visit Trinity College’s site here. The page includes this interesting article, “Representations of Irish History in Fiction Films Made Prior to the 1916 Rising” by Kevin Rockett.

9 thoughts on “Silent Ireland: 5 Dramas From The Emerald Isle”