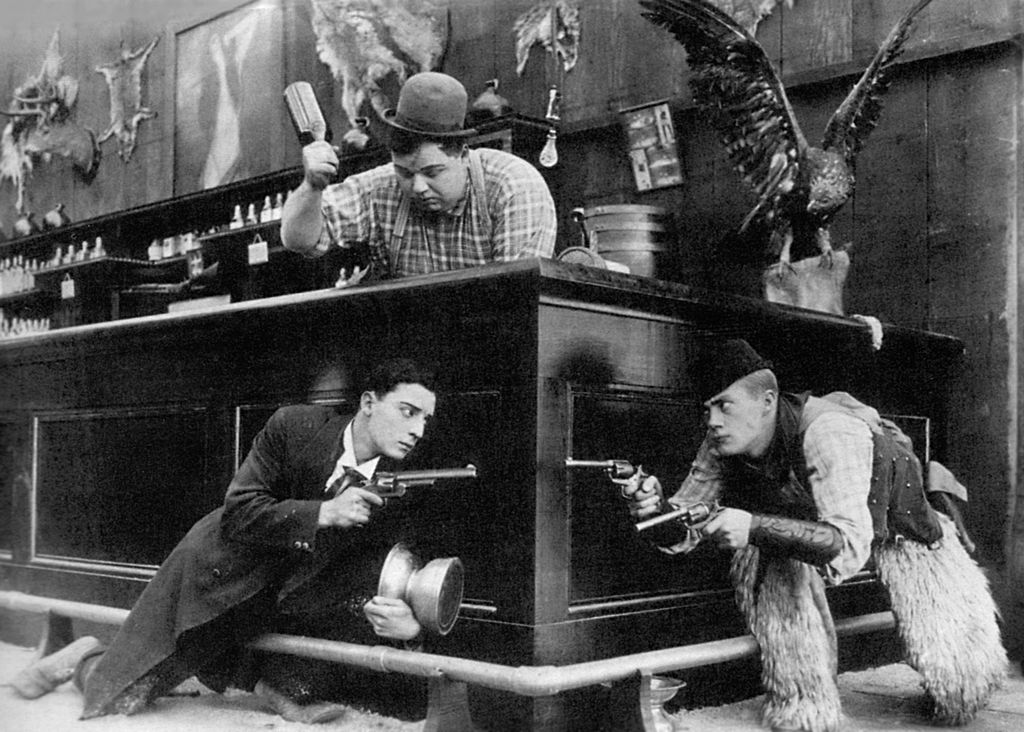 For the most part Out West is a surprisingly timeless spoof of the western, a wildly popular film genre at the time. Folks will recognize plenty of clichés, including the rough-and-tumble saloon, several shoot-outs, and whiskey strong enough to melt a tin can. There’s quite a bit of dark humor too, the kind we’d later see in Buster’s The Frozen North (some folks criticize this, but honestly, guys, it fits right in with the dark humor all over the Internet). It’s also lightened by some child-friendly gags, such as the scenes where villainous Al is conquered through…tickle power.

The Comique crew clearly had a ball with the production. The scale of it must’ve been exciting–Arbuckle built a replica frontier town in a California canyon, shown off in several sweeping shots. Since A Country Hero is lost, this is the earliest Comique available showing what Arbuckle could do with the freedom of the great outdoors.

It opens with Roscoe as a stowaway on a train rolling through the desert. (Some prints of Out West have been jumbled over the years–one opens with Al St. John lighting a cigarette before segueing into the saloon scenes! Happily the latest Lobster Films print has the puzzle pieces back in their rightful spots.) He’s hiding out in the water tank, of all places, and sneaks food from the engineers’ breakfast table, causing much mayhem and consternation. (Take notice–one of the engineers is Joe Keaton!)

In an impressively-shot sequence, Roscoe is pursued along the top of the moving train and is finally kicked off. Stubbornly, he hops back onto the last car and gleefully detaches it from the rest of the train. But here’s where it gets interesting: the train backs up and hits the detached car, depositing him right back into trouble with the hopping-mad engineers.

In his classic book The Silent Clowns, Walter Kerr talked about what he called the “Keaton Curve,” where Buster’s character would attempt to flee from trouble but would end up right back where he started. The best example is a gag from Neighbors (1920), where he escapes from his girl’s angry father by zipping across the yard on a clothesline and into the opposite house, but flies uncontrollably down a curved banister and out the window and back across the yard on the same clothesline, right back to the angry father’s house. The gag from Out West shows a similar Keaton Curve, and it’s not a big stretch to think that Buster himself suggested it.

The camerawork is also similar to what Buster would use in his own films, particularly the large-scale shots of the moving train. The cameraman on Out West was George Peters, and it’s interesting to speculate if he passed on his expertise to Buster or if Buster, having an eye for composition, made some suggestions. Other scenes, such as Buster’s shootout by a rocky outcropping, also call to mind the kind of cinematography in his own films.

Alright, let’s analyze that one racist scene, which happens after Arbuckle gets a job as a bartender in Bill Bullhorn’s saloon. Seemingly out of nowhere, the cowboys in the saloon start shooting at a black shoeshiner’s feet to make him dance. That sounds pretty bad right there, but oh, it gets worse–Roscoe and Buster join right in, which pretty much crushes your soul, and they’re only stopped when a pretty Salvation Army worker (Alice Lake) intervenes.

The black man as servant is not treated as a human being, but as a veritable animal who can be cruelly toyed with by a group of people who are amused by his frightened reactions. If it were villains taunting the man, with Fatty and company coming to his rescue, it might have been less unsettling. But it is Fatty and Buster, the supposed good guys, the heroes of the picture, who somehow derive amusement by taunting this man. It is quite a disturbing scene.

How can we even wrap our minds around it? It’s tough, but I will float one possibility that might somewhat explain its reasoning–maybe it wasn’t supposed to be funny. In and of itself, that is.

There’s a lot of dark humor in Out West, but it’s humor found in tense situations which aren’t funny by themselves. When Bullhorn shoots the man cheating at cards, that’s dramatic but not funny. But Bullhorn telling the other guy “You would’ve lost anyway” and nonchalantly kicking the dead man’s body through a trapdoor is darkly funny. The bartender dying during the shootout isn’t funny, but Bullhorn immediately putting up a “Bartender Wanted” sign is.

As is this guy sneaking a drink during a holdup.

The frontier town is a “lawless” sort of place, and Bill Bullhorn and even Roscoe himself are fairly amoral (not your average “good guys,” I’d say). Thus, the cowboys’ act of cruelly making the black man dance is supposed to be cruel, with a touch of “humor” added in the shot of him jumping through the trapdoor and right back out again after seeing a corpse (wow, that’s even grimmer when I write it out). This is backed up by Alice showing her deep disapproval of the taunting and Roscoe getting embarrassed. (I also wonder if some title cards and little snippets of footage might be missing here.)

I’ll also note that publicity material for Out West mentioned Roscoe “reforming” the town, strangely, which also makes me wonder if footage is missing.

In any case, the mere fact that the scene exists at all and chose to use a black actor (Ernie Morrison Sr.) without a second’s thought sure shows how time has changed.

As a whole, Out West is a remarkable short. It’s a clever parody with an ambitious scale and isn’t afraid to use edgy humor. And, like Oh Doctor!, it blends that humor with a bit of drama. It’s a pity that racist gag was included, because otherwise Out West might very well be hailed as a classic early satire.

And now we’ve reached my favoritest Comique (usually, it’s so hard to pick), the ever-popular The Bell Boy! It’s chock full of some of Arbuckle’s best gags and routines and ended up being a source of inspiration to Buster for decades–yes, decades–to come. 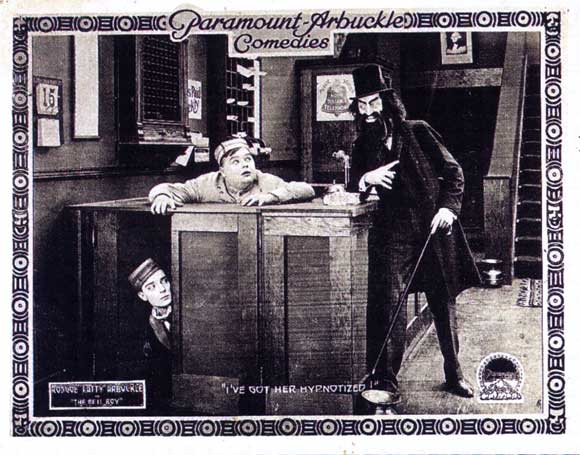 (I just realized how creepy the caption is on this lobby card.)

Arbuckle returns to his beloved small-town setting, this time centering the action at the quirky Elk’s Head Hotel (“Third-rate service for first-rate prices”). He and Buster are bellhops, while Al is the front desk clerk. The hotel features an old-fashioned horsecar that takes guests to and from the train station (the Elk’s Head isn’t quite caught up on 1918 modern conveniences). The hotel elevator is also powered by a rope tied to the horse.

One of the guests is the manicurist Cutie Cuticle, and of course Roscoe and Buster are instantly rivals for her hand. After some mishaps Buster’s literally left hanging as Cutie goes off with Roscoe. Hoping to impress his new sweetheart, Roscoe comes up with a plan that could only work in a silent comedy–have Al and Buster pretend to break into a bank by, well, actually breaking into a bank, and then have Roscoe swoop in to save the day. And then tell Cutie all about it, I guess. Aw what the heck, it’s Comique! 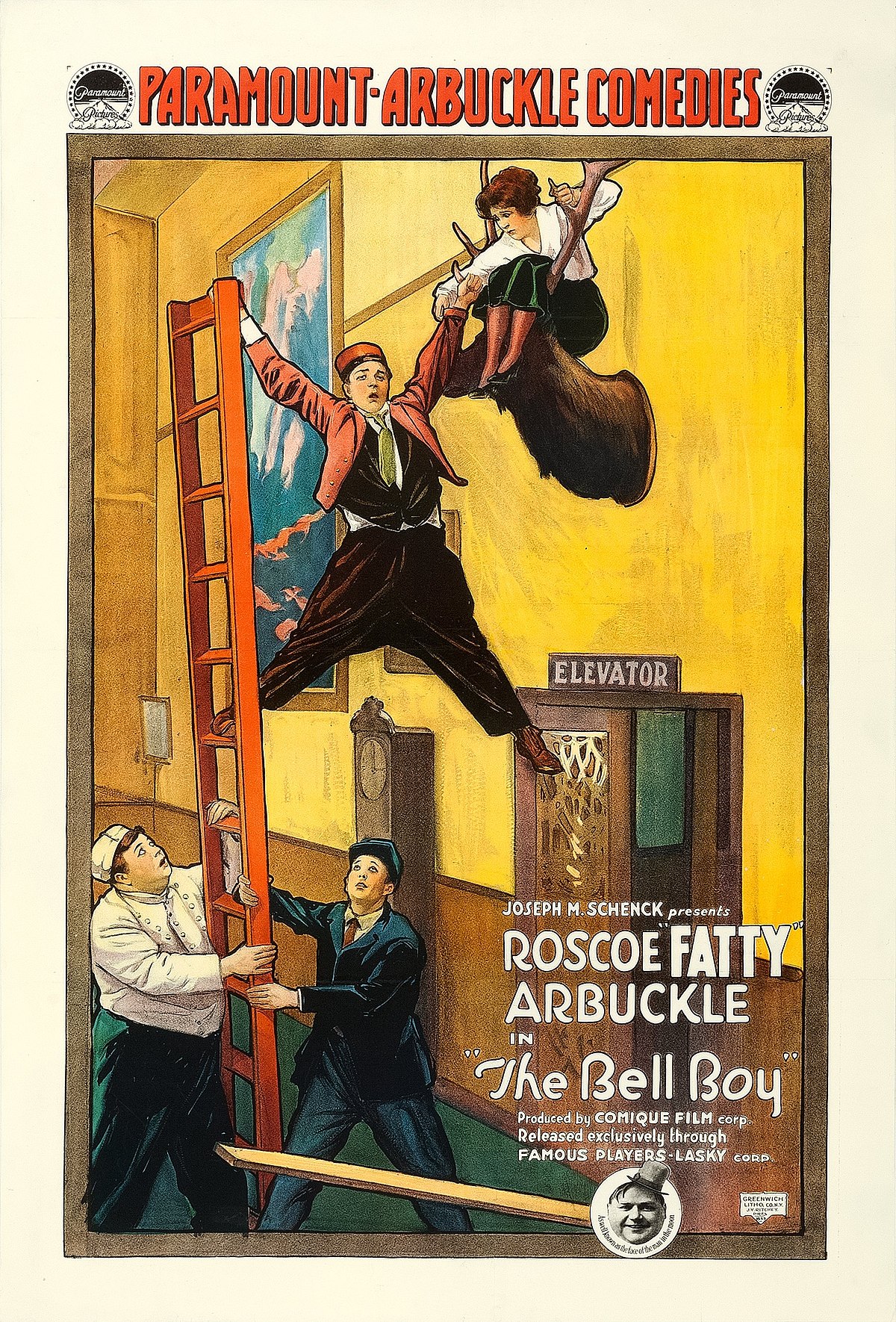 Unfortunately, real robbers have already broken into the bank, and after a huge fight scene involving much acrobatics and money being thrown like confetti, the short ends with a bang that involves the out-of-control horsecar and an unsuspecting dance hall. It’s a beautiful thing.

The Bell Boy is the first short where Roscoe and Buster are arguably a comedy team–for the first half of the film, anyways. This technically makes them one of the earliest “fat and skinny” teams in films, although not the first (Oliver Hardy and Bobby Ray might claim that distinction as “Plump ‘n’ Runt”). Seeing them use their impeccable timing and expert slapstick skills as a duo is a real joy. By the short’s second half Roscoe, Buster and Al morph into more of a comedy trio–a rare thing in silent comedy days. There are so many throwaway jokes, surreal touches and little humorous flourishes in The Bell Boy that you could easily spy something new every time you watch it. You suspect a lot of gags had to be left on the cutting room floor to get it down to two reels. When we first see Buster he’s sitting in a huge pile of newspapers–he’s spent all day reading the paper instead of working. At one point Al does a spectacular “blink and you’ll miss it” backwards flip over a chair. When Roscoe gives a customer a face-tingling shave, a sign on the wall proclaims “Painless Shaving–Our Specialty.” And one of my favorite parts is when Al and Buster agree to break into the bank. They dive behind the hotel counter and pop back up wearing “burglar” masks. The counter just so happens so hide a big store of excavating tools, too.

Another jewel in the crown of happiness that is The Bell Boy is a brief slapstick scene between Buster and his dad Joe Keaton, who plays the part of an irate customer. This is a very rare glimpse into how they may have worked together onstage, and was filmed only a year or two after the demise of their family act The Three Keatons.

I could go on and on, singing the praises of this short. I didn’t even touch upon the classic “shaving scene” yet, one of the most memorable and clever sequences Arbuckle ever filmed. Oh, and I didn’t tell you about the devilish customer, either, or the delightfully dated WWI jokes, or the winking elk’s head, or–well, you’ll just have to watch the film for yourself. I recommend it to anyone who enjoys classic comedy, and I’m sure kids will get a kick out of it, too.

9 thoughts on “Thoughts On “Out West” And “The Bell Boy””