Whence came this little terrier? He was apparently a present to Keystone actress Minta Durfee, who was Arbuckle’s wife at the time. Understandably nervous about doing a stunt* involving dangling over a cliff above a highway–ah, Keystone–she was finally talked into it when director Wilfred Lucas promised she’d get “a nice bonus.” As it turned out, the bonus wasn’t cold harsh cash but a six-week-old pitbull terrier puppy. The lil’ guy won Durfee over, though, and she dubbed him “Luke” after the director. Minta may have been Luke’s technical owner, but Luke definitely became Roscoe’s dog. Roscoe patiently taught the energetic little pup to do tricks, and Luke proved to be such a fearless student that he learned to climb up and down ladders–some that went as high as the roof of a building–and could even jump from one speeding car into another! Soon, Roscoe’s talented pet began appearing in Keystone shorts. He made his film debut in Fatty and Mabel’s Wash Day (1914). In his first-ever scene he sits nicely and a bit sleepily as Mabel Normand does her washing. 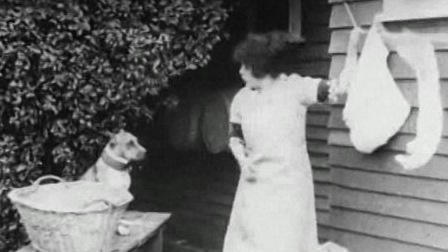 Other classic shorts included Fatty’s Faithful Fido, Fatty’s Plucky Pup and Fatty and Mabel Adrift, all of which are some of my favorite Keystones. Rumor has it Luke received his own salary of $150 a week. He also made public appearances with Arbuckle and popped up in fan magazines here and there. A 1918 Photoplay article said, “‘Fatty’ Arbuckle spends all of his spare time between scenes teaching his bull terrier ‘Luke’ new comedy stunts such as walking up and down a second story ladder, furnishing the motor power for a corn meal mill, or steering a speeding locomotive.” (!!! Could that last part be another hint about the elusive A Country Hero?! I’m always on the alert!)

When Roscoe left Keystone to make comedies for his very own Comique Film Corporation in NYC, Luke of course came along. He appeared in several Comique shorts, starting with The Butcher Boy. When Roscoe moved his company across the country to Hollywood, according to Photoplay they staged a cute stunt where fellow dog actors greeted Luke at the train station.

At both Keystone and Comique, Luke was one of the most eager actors in Hollywood. He was often recruited to chase the screen villains–often played by Al St. John–which he would do with all the enthusiasm of a hundred fireworks. He would also swim to get help, find damsels in distress, and otherwise save the day. At Comique Al and Buster Keaton apparently had to wear leather under their clothes for some scenes in case Luke got so excited that he nipped them too hard. Buster Keaton would borrow him for The Scarecow, playing a dog that Buster mistakenly believes is rabid (he actually just ate a cream pie). Luke showed off his stuntwork yet again in a chase scene where he and Buster ran around the top of an abandoned building. In one perfect shot he leaps into a haystack to find where Buster’s hiding–clearly having a ball with this whole “filmmaking” business. When Roscoe and Minta divorced, Luke was given to Minta as part of the settlement but Roscoe was still allowed to visit him. Exactly what Luke did after 1920 is a bit of a mystery, but we can assume that this fearless, memorable little canine star lived the life of a king until passing away in 1926 at age 13. * The story goes that the film being made was Lane, Speed and Thrills, co-starring Chester Conklin, but no such film exists in the Keystone filmography. There is a film called Love, Speed and Thrills (1914) that starred Durfee and Conklin, but it was filmed at approximately the same time that Luke appeared in Fatty and Mabel’s Wash Day.

Another tidbit: While Luke was considered an English bull terrier back in his heyday, his breed was renamed the American Staffordshire terrier in 1936.

16 thoughts on “A Salute To Luke The Dog”