That same review also states, as a matter of fact: “Every one knows the story of ‘The Blue Bird.'” I’m guessing that not exactly true anymore, so the fanciful plot is as follows: Mytyl and Tyltyl (WordPress is very confused about what I just typed) are the children of a woodcutter. Their impoverished neighbor, the widow Berlingot, has a young daughter who is ill. Wishing to cheer her up, Berlingot asks Mytyl and Tyltyl to let her borrow their pet bird, but they refuse.

That night, Berlingot enters the Tyl family’s home only to transform into the fairy Bérylune (Lillian Cook, looking like a perfect dream of a Victorian-style fairy). She tells Mytyl and Tyltyl that they must find the blue bird of happiness. Tyltyl receives a magical hat that allows the children to to speak with their pet dog and cat and to see the personified souls of Things like Water, Fire, Sugar, and Bread (Bread pops out, rather alarmingly, from an oven). These Things, played by actors in elaborate makeup and beautiful actresses, accompany the children on their quest. 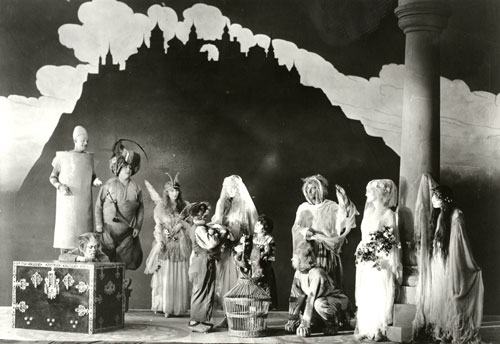 In the tradition of these “on the road” types of fantasy adventures, the group travels to distant lands and witness many strange and beautiful sights. They visit the fearful Palace of Night, go to a cemetery where Mytyl and Tyltyl reunite with their loving grandparents and deceased siblings (a lot of deceased siblings, might I add), explore the Palace of Happiness and eventually see the Kingdom of the Future. And yet, Mytyl and Tyltyl cannot find the Bluebird of Happiness…or maybe, they simply have to look in their own backyard.

Does any of the above remind you of Grimms’ fairytales and old, old children’s’ book illustrations? It makes me think of those, too. The original play The Blue Bird, written in 1908 by renowned Belgian poet and playwright Maurice Maeterlinck, drew on familiar imagery from traditional fairytales (some details being more familiar at the time). In the actual text of his play Maeterlinck gave clear instructions for his characters’ costumes: “TYLTYL wears the dress of Hop o’ my Thumb in Perrault’s tales…LIGHT–The ‘moon-colored’ dress in Perrault’s Peau-d’ane…the NEIGHBOR BERLINGOT–The traditional dress of poor women in fairy-tales.” Which makes you wonder how many people left today are familiar enough with Hop o’ my Thumb or the writer Charles Perrault to instantly understand how those costumes should look. (With that in mind, check out the description for Sugar: “A silk gown, cut like that of a eunuch in a seraglio, half blue and half white, to suggest the paper wrapper of a sugar-loaf. Eunuch’s headdress.” Now that’s interesting.)

Photos from a 1908 Moscow theater’s production of The Blue Bird.

There are some strong elements of the French féerie in The Blue Bird. It’s also infused with Symbolism, a 19th century artistic movement which was somewhat similar to Romanticism. Symbolists used metaphors and allegories to describe truths and ideals, largely in response to realism and the rapid rise of industrialization. The highly-regarded Maeterlinck was a prominent symbolist, first achieving popularity with his 1893 play Pelléas and Mélisande (Claude Debussy was a fan). Masterful director Maurice Tourneur translated Maeterlinck’s thoughtful fairytale to film, and he arguably went above and beyond. Called the “poet of the screen,” Tourneur once said, “The time has come where we can no longer merely photograph moving and inanimate objects and call it art…We must present the effect such a scene has upon the artist-director’s mind, so that an audience will catch the mental reaction.” He takes the artistry of the play very seriously, using a variety of inspired special effects to bring to life such tricky figures as the Soul of Fire and the Soul of Water. His imaginative visions of the Palace of Night and other mysterious realms use stylized sets and imagery that seems pulled straight from childhood dreams.

He also used a variety of tinting and toning (toning being the coloring of dark areas of the film), making each frame glow with rosy pinks, dusky violets and combinations of blue, green, and gold. Not for nothing did director Clarence Brown declare, “The most beautiful shots I ever saw on the screen were in Tourneur’s pictures. He was more on the ball photographically than any other director.”

The Blue Bird was filmed in a time that needed it. Much of the western world had been embroiled in World War I for the past several years. As that great tragedy was slowly, painfully grinding to a halt, this delicate, philosophical fairytale was released in theaters. Its heroes were two flawed but good-hearted children, braving the horrors of Night and wandering the dwelling places of the dead, seeking a token of happiness and peace. Film Fun published this warm review:

With every ear attuned for tidings of peace, as well as for the Easter resurrection anthem, it was happy foresight which moved the producers to release “The Blue Bird” at this opportune time, for the loveliness of childhood and its steadfast faith in the miraculous may bring new hope and courage to a war-weary world…Can you imagine how this picture is likely to impress the fighting men to whom it may be shown in the little theaters behind the lines “Over There”? Could the Easter message come in a more acceptable fashion or at a better time?

Although well-received and granted a prominent release on Easter Sunday, 1918, financially The Blue Bird didn’t do as well as Tourneur had hoped. It seems to have faded into obscurity, rescued only in recent years by the George Eastman House, which worked with the The National Endowment for the Arts, the U.S. Park Service’s Saving America’s Treasures program, and the National Film Preservation Foundation to create a beautiful restoration–from a sole surviving nitrate print.

Not everyone will warm up to The Blue Bird, with its actors in thick makeup crawling on all fours to play cats and dogs, and its archaic-sounding language like the dog exclaiming “At last we can talk, my little deities!” Then there’s the shades of darkness, such as when Bérylune warns the Things: “All those who go with the children must die at the end of the journey…” Even I, Champion of All Things Archaic, found it a bit unsettling at first.

But for those willing to watch it with an open mind, they will experience a mystical, poetic film from a bygone era. They might be surprised to find themselves musing on deep topics like death and the role of family in the pursuit of happiness. And above all, The Blue Bird can impress them as a work of singular beauty, and that in itself is timeless.

The Blue Bird is available on DVD from Kino, with a delightful score by the Mon Alto Motion Picture Orchestra.

Koszarski, Richard. An Evening’s Entertainment: The Age of the Silent Feature Picture, 1915-1928. Berkeley and Los Angeles: University of California Press, 1990.

This Obscure Films review is part of The Colours Blogathon, hosted by Thoughts All Sorts. Be sure to check out all the great reviews in this popular ‘thon! And I would like to offer a warm welcome to all new Silent-ology readers–feel free to take a look around, and don’t be shy about leaving comments! I love comments like Keystone actors loved fake mustaches.