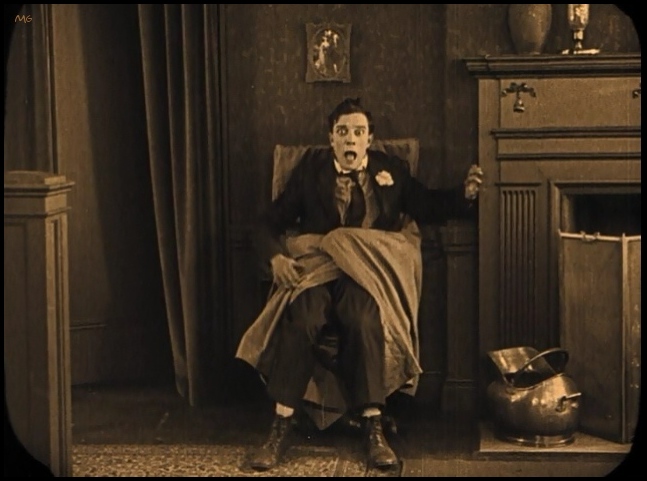 It starts, not too surprisingly, in the opposite sort of location–a bank, where Buster works as a teller. This gives him opportunities to work in some of his delightful nonsensical gags, such as the one where he turns his cane into a hook for his hat by magically sticking it to the wall. And we also get to enjoy the classic “glue pot” scene, where Buster accidentally gets glue all over the money he’s counting and it ends up practically carpeting the bank. 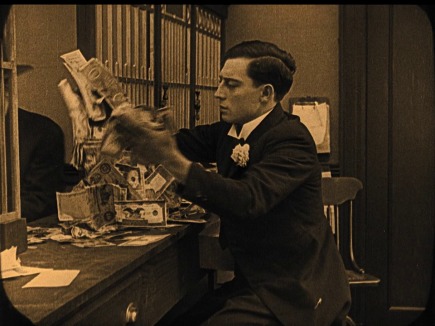 When he’s quite literally caught in the wrong place at the wrong time, Buster gets accused of being a bank robber. Fleeing the scene, he hides in a spooky nearby house. He doesn’t know that it’s being used by counterfeiters as a hideout, and really doesn’t know that they dress up as ghosts and goblins to convince people the place is haunted (quite a creative way of keeping a place private, I must say). To make matters more complicated, the Daredevil Theatrical Troupe flees a theater of angry patrons after their disastrous version of Faust, and hide out in the same house. So aside from the counterfeiter ghosts and goblins, we also have a Mephistopheles on the scene to scare our unfortunate Buster.

Not only is that glue pot sequence one of the most memorable Buster ever filmed, the haunted house itself is an ideal setting for his busy imagination. The best part is the running gag of a staircase that can turn into a slide to keep interlopers from reaching the second floor. Buster has repeated run-ins with the aggravating staircase, and rather than growing stale, the gag becomes more and more layered as Buster begins to anticipate the staircase’s behavior and makes split-second strategies to evade it (some more successful than others).

It’s also fun to see 1921’s idea of creepy ghouls, which isn’t too different from ours today. There are the usual white-sheeted ghosts, a bat costume, an old bearded man who’s maybe supposed to be Father Time, and two of the coolest freakin’ skeleton costumes I’ve ever seen, bar none. 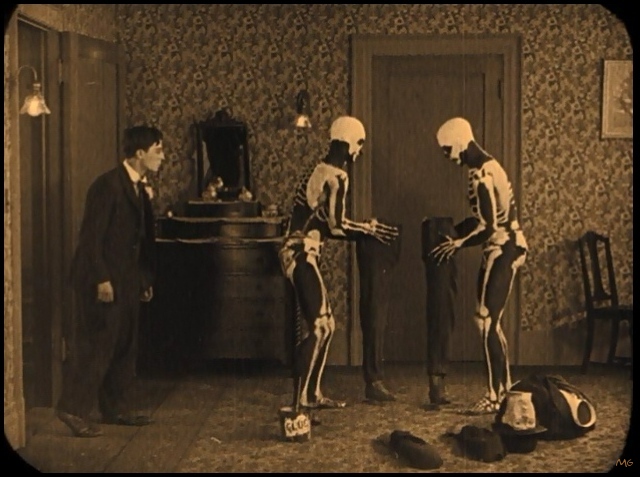 I want one of these costumes.

In spite of its popularity, The Haunted House is sometimes cited as one of Buster’s weaker shorts. I might agree, and would probably rank it a little above Hard Luck and The Love Nest–often agreed to be “minor” Keatons, if there is such a thing (by the way, I like The Blacksmith quite a bit more than most folks). This isn’t because of the usual criticism of the “two-part structure,” although I’m never sure why this is automatically considered a flaw (the first half sets the stage for everything in the second, after all!). Both the story behind the “haunted” house and the way the theatrical troupe is shoehorned into the plot always seems to confuse people who’ve watched this short with me.

However, the saving grace of The Haunted House is certainly its ending, one of Buster’s most creative. Getting knocked out, Buster dreams that he’s wearing an angel robe and must trot up a long, long staircase up to heaven. 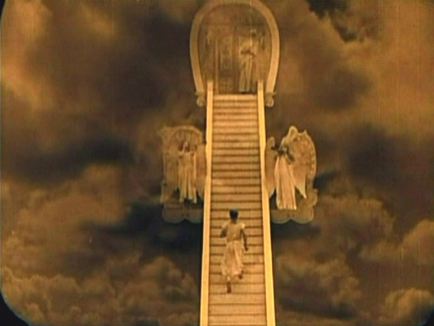 But even in a dream sequence involving gentle angels and the pearly gates, Buster can’t escape the curse of the staircase. It turns out that he was actually expected in the Other Place. (This is a fairly elaborate setting for such a brief shot–did Buster have it designed, or did his studio “borrow” an existing set?) 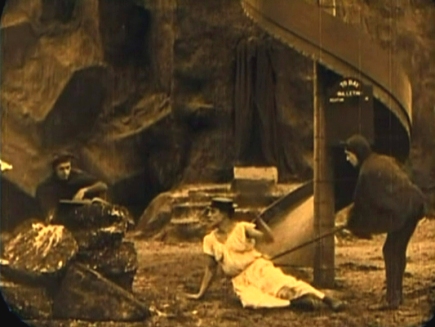 Buster’s adventure in a haunted house is a favorite among Keaton fans, and I like to save it especially for October (which in my house is Halloween Month). It’s not a bad film to introduce to Keaton newbies, either. People of all ages are bound to get a kick out of his run-ins with flapping ghosts, and those super cool skeletons too, of course. Seriously, where can I get one of those costumes? 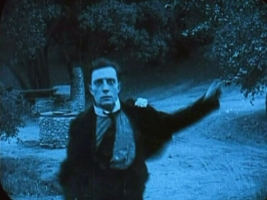