“I only fell in love once with a movie actor. It was Conrad Veidt. His magnetism and his personality got me. His voice and gestures fascinated me. I hated him, feared him, loved him. When he died it seemed to me that a vital part of my imagination died too, and my world of dreams was bare.”

Quoted from one of the documents compiled in British Cinemas and Their Audiences by J.P. Mayer.

He had a lean, chiseled face that could’ve belonged to a regal nobleman, a sickly poet, or a sinister villain. His blue eyes could burn with the fury of a madman, or grow wide and distant as if trying to forget terrible secrets. But they could become warm and friendly too, especially if you were chatting with this tall, distinguished man about his greatest passion: dramatic acting. “I must have the dramatic, the ecstatic,” he told an interviewer in 1928, “something with great mental force.”

Known today for such horror classics as The Cabinet of Dr. Caligari and The Man Who Laughs, Hans Walter Conrad Veidt (nicknamed “Connie”) came from a quiet and sensible background. He was born on January 22, 1893 in Berlin to a middle-class, Protestant family, and his father was a former Royal Artillery sergeant who worked as a civil servant. As a boy, Veidt had initially dreamed of becoming a surgeon. He had been inspired by the time a heart surgeon had performed a risky operation on his father, saving his life against all odds, and then tactfully only charging the family the little they could afford to pay. Deeply impressed, young Veidt hoped to one day be just as honorable. One day, he would be–although not in the way he had anticipated.

Said to be one of his boyhood photos.

After realizing the sheer amount of education it took to become a surgeon, Veidt became discouraged. Fortunately, he had another passion: acting. After delivering a fine monologue for an otherwise dismal school play, Veidt felt the stage was his destiny. He left school without a diploma to study the great actors of his time (which fortunately wasn’t a difficult task, considering the prominence of German theater in the 1910s). His mother was delighted, but his father was not pleased. Veidt later recalled him lamenting, “An actor is a gypsy, an outcast”–however, the young man had made up his mind.

The 6’3″, slender teenager took to dressing in “theatrical” clothes–complete with a cape and monocle–and hanging around theaters as often as possible, going to every performance he could. In time he was introduced to an actor who agreed to give him acting lessons for free. He threw himself into the lessons, so enthused that at times he’d forget to eat. After about ten lessons the ambitious Veidt decided to audition for no one less than Max Reinhardt himself, giant of the German theater and a huge influence on the development of German Expressionism. Although he later recalled Reinhardt gazing out of the window during his entire audition, he did get a contract as an extra for ten dollars a month. Veidt would later recall how thrilled he was, spending his first ten dollars entirely on business cards with gold lettering that proudly read, “Conrad Veidt, Member of the Deutsches Theater.” 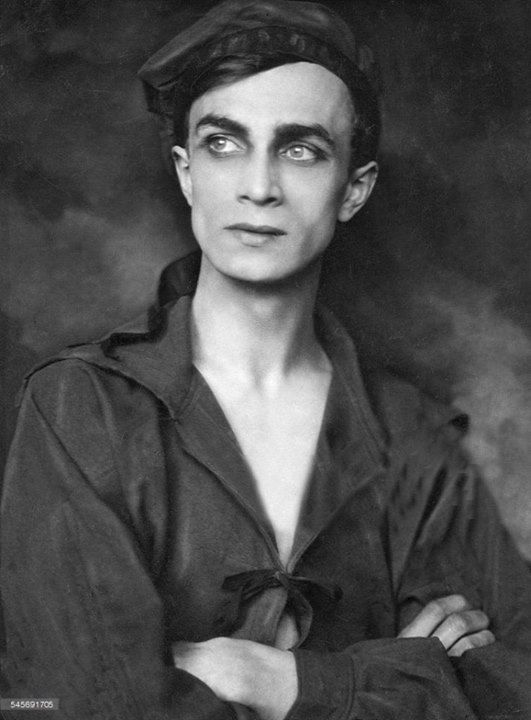 Before he could work his way up to speaking roles, however, World War I began. Veidt enlisted and was sent to the eastern front. After being in the Battle of Warsaw he fell ill with jaundice and pneumonia. Upon his recovery he was declared unfit for service and was allowed to join a theater that entertained the troops. In 1917 he was officially discharged and he immediately went back to Reinhardt’s Deutsches Theater, eager to sharpen his skills. He later said, “My will to succeed was never stronger within me. It was kind of an urgent drive which forced me forward, the impetus gathering strength as it progressed.” 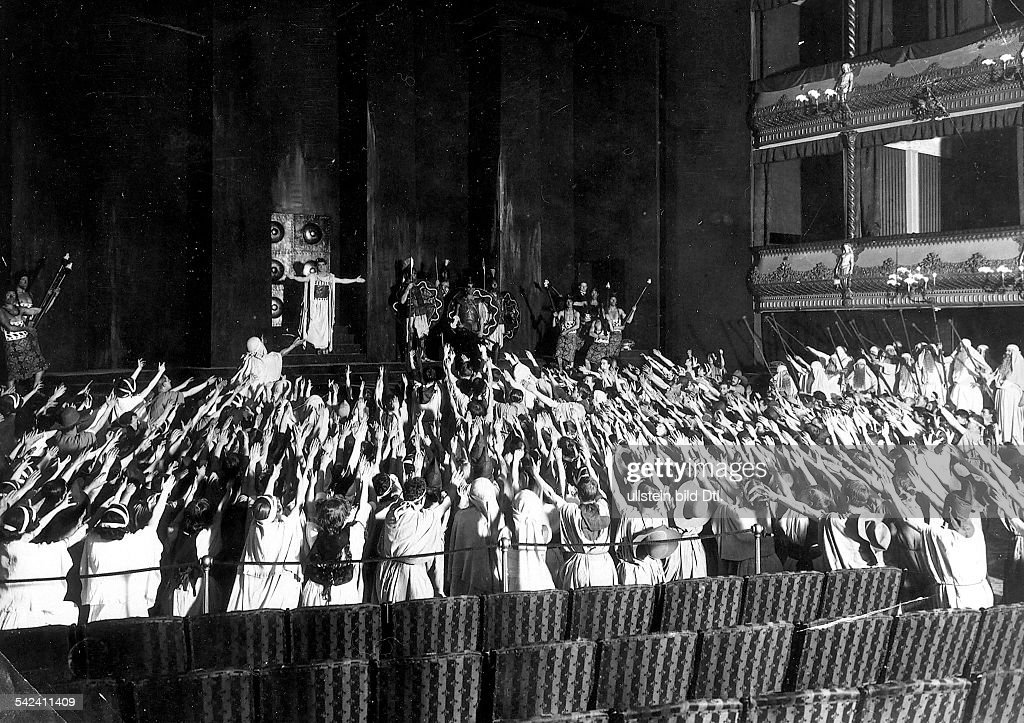 Rehearsal of the Reinhardt production Oedipus in London.

That same year, Veidt’s father passed away. For the rest of his life, Veidt would grieve that his father had died too early to witness what a success his son would become. The key to that success was Veidt’s decision to start appearing in motion pictures, where he tended to have “exotic villain” roles due to his strong facial features (one early horror-type role was of Satan in Der nicht vom Weibe Geborene). He found it little trouble to act in films during the day and perform on the stage at night, where he was appearing in notable German Expressionist productions.

Although surrounded by talent–including actors Emil Jannings, Ernest Lubitsch and F.W. Murnau–Veidt was still able to stand out. A famed theater critic mentioned him in a review that Veidt would quote the rest of his life:

Conrad Veidt…is a very strange-looking young man with a face you will never forget. His eyes haunt. He dominated the stage. I forgot the others when he was on. I hope his fate will not be to go on to films, but undoubtedly film producers will be rushing for his services.

Some of his most notable early film roles were for a series of Aufklärungfilme, or “enlightenment films,” which tackled such heavyweight subjects such as prostitution, STDs, and even homosexuality. The latter was presented in Anders als die Andern (or Different From the Others, 1919), in which Veidt gives a sensitive performance as a gay violinist who falls for his student. Around this same time he married his first wife, Gussy Holl. 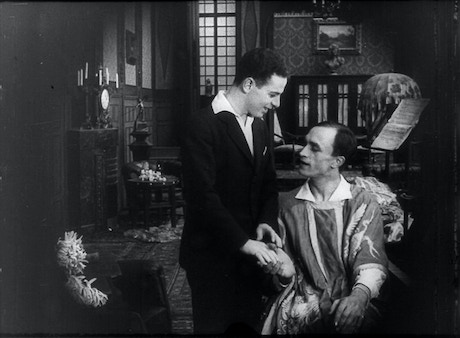 Then came the role that would forever cement his place in film history–even though it would be far from his only plum role: the somnambulist Cesare in the wildly Expressionistic The Cabinet of Dr. Caligari (1919). Wearing all-black, stretchy clothing and heavy makeup, Veidt’s gothic-looking Cesare has become one of the most iconic figures in the cinema. While he’s only in a few scenes, his intense, trance-like performance makes a big impact. It was the exact sort of role Veidt gravitated toward, for he enjoyed playing villains who still had humanity: “They are bad, because somebody has made them bad,” he would say of such characters. “Life has twisted them.” 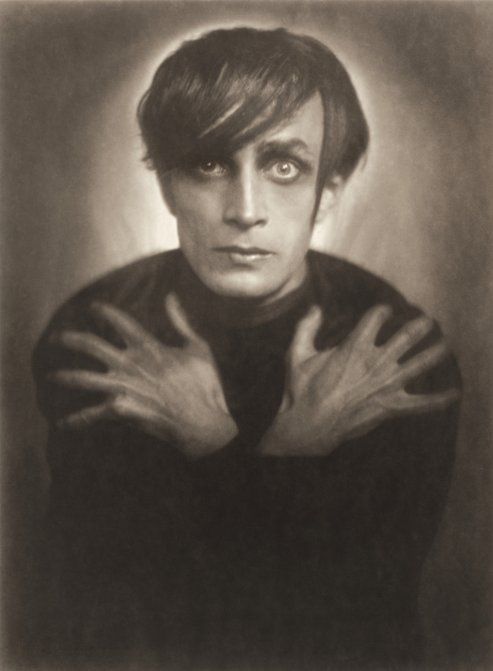 In 1922 his beloved mother would pass away, and first marriage came to an end. Despite these hardships he continued to hone his acting skills. His ties with the influential German Expressionist movement as well as his flair for villainous roles was further cemented by his work in The Hands of Orlac (1924), Ivan the Terrible (1924) and The Student of Prague (1926).

After marrying his second wife Felicitas, Veidt–always striving for perfection, always looking for the deeper meaning in his life–was now experiencing a happier marriage than his first and a growing reputation as one of Europe’s great actors. He achieved even greater happiness when his only daughter Viola was born in 1925. “Do not ask me how I behaved when my daughter was born,” he later said “Like a crazy man. Certainly I did not comport myself like a normal father.  You might have thought nobody had ever had a baby before.  I wanted to do the craziest, the most extravagant, the most useless things.”

In the midst of this joy Veidt received a telegram from John Barrymore, inviting him to Hollywood to make a picture. The offer being too important to pass down, he reluctantly left his wife and child and sailed to New York. Upon seeing the vast, busy metropolis, he remembered thinking wryly, “Ah, now I am playing in ‘Caligari’ again.” Once in Hollywood (where he received a warm welcome), he acted in Barrymore’s film The Beloved Rogue (1927) to much critical acclaim. He would eventually send for his wife and child and they would live together in Beverly Hills.

He would only make a few pictures in Hollywood, including The Man Who Laughs (1928), a difficult role that required him to do much of the emotional acting with his eyes alone. (It’s said that the Joker was modeled on Veidt’s appearance.) The coming of talkies was tough on him, due to his thick German accent, so he decided to return to Germany and resume acting there–missing out on an offer to play the lead in Dracula. 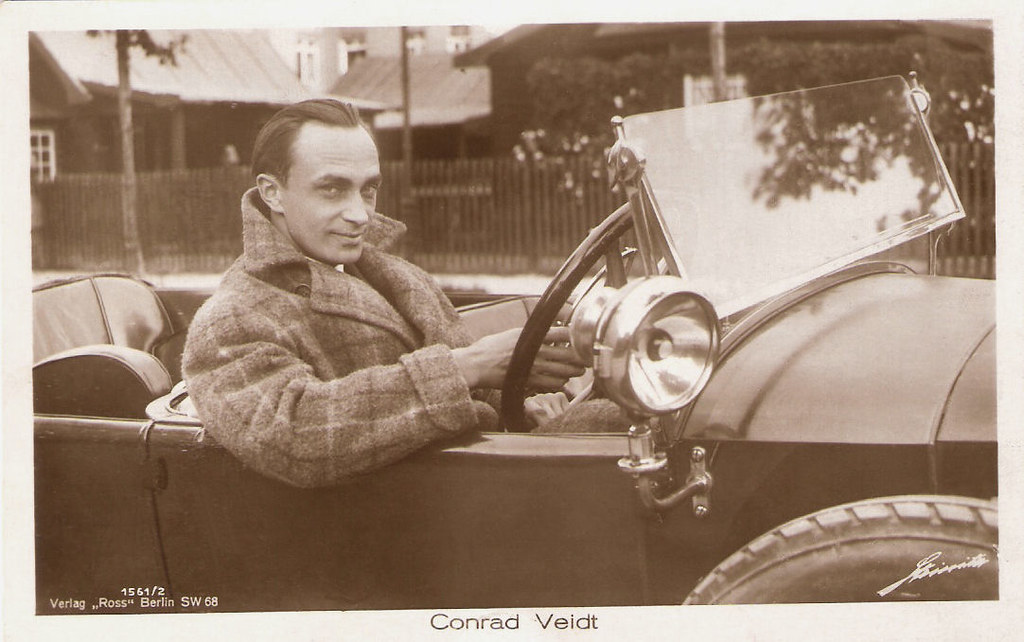 His marriage with Felicitas would end in 1932 (he would later say the failure of his first two marriages was due to having a psychological “mother complex”) and the following year he would wed Lily Prager, who he’d remain happily married to until his death. He would remain close to his beloved daughter and on good terms with his ex-wives.

But back in Germany Veidt was starting to find the rise of Nazism intolerable, especially since Lily was Jewish. He would make films in Britain, particularly the pro-Jewish The Wandering Jew (1933) and Jew Süss (1934), which brought him to the attention of the Gestapo, which imprisoned him for a time. Not long after marrying Lily he had to fill out the “racial questionnaire” imposed by Joseph Goebbels, where German actors had to state their ancestry in order to stay employed. Gentile Veidt deliberately wrote down “Jewish.” Soon after the couple left Germany for good.

After being in several British films he ended up back in Hollywood to play Vizier Jaffar in The Thief of Bagdad (1940), after first donating his life savings to the WWII effort. He would continue to donate much of his earnings to the allied cause, even while being gradually typecast into aristocratic Nazi roles (he always insisted that they clearly be the villains). His popular appeal as a suave, attractive villain was such that an ad campaign proclaimed, “Women Fight For Conrad Veidt!”

His second-to-last film was Casablanca (1942), where he played Major Strasser (and was the highest-paid actor in the film, despite having a supporting role). His last film would be Above Suspicion (1943), costarring Joan Crawford. A few months after shooting was complete, he would suffer a heart attack while playing golf at the Riviera Country Club. He was pronounced dead on the scene. Only 50 years old, he never saw the end of the war and victory of the Allies he had been so passionately supporting.

Yet he left behind a legacy every bit as honorable as that of the surgeon he had admired so long ago. Remembered for both the Weimar era Caligari, sometimes argued as prophetic of the Nazi regime to come, and WWII era Casablanca, with the theme of risking everything for the Allied cause, Veidt is forever linked with a time that he had personally witnessed. He was one of cinema’s finest actors, and a gentleman who was a hero behind the scenes.

Eisner, Lotte H. The Haunted Screen: Expressionism in the Cinema and the Influence of Max Reinhardt. Berkeley and Los Angeles: University of California Press, 2008.

Morin, Edgar. The Stars: An Account of the Star-System in Pictures. New York: Grove Press, Inc., 1961.

33 thoughts on “A Mesmerizing Talent: The Life And Career Of Conrad Veidt”