If you got to go back in time to the Golden Age of Hollywood and spend Christmas with one of your favorite stars, who would you pick? It would be a really tough decision, but if you were factoring in stars who were really, REALLY into Christmas, then Harold Lloyd should probably top your list! 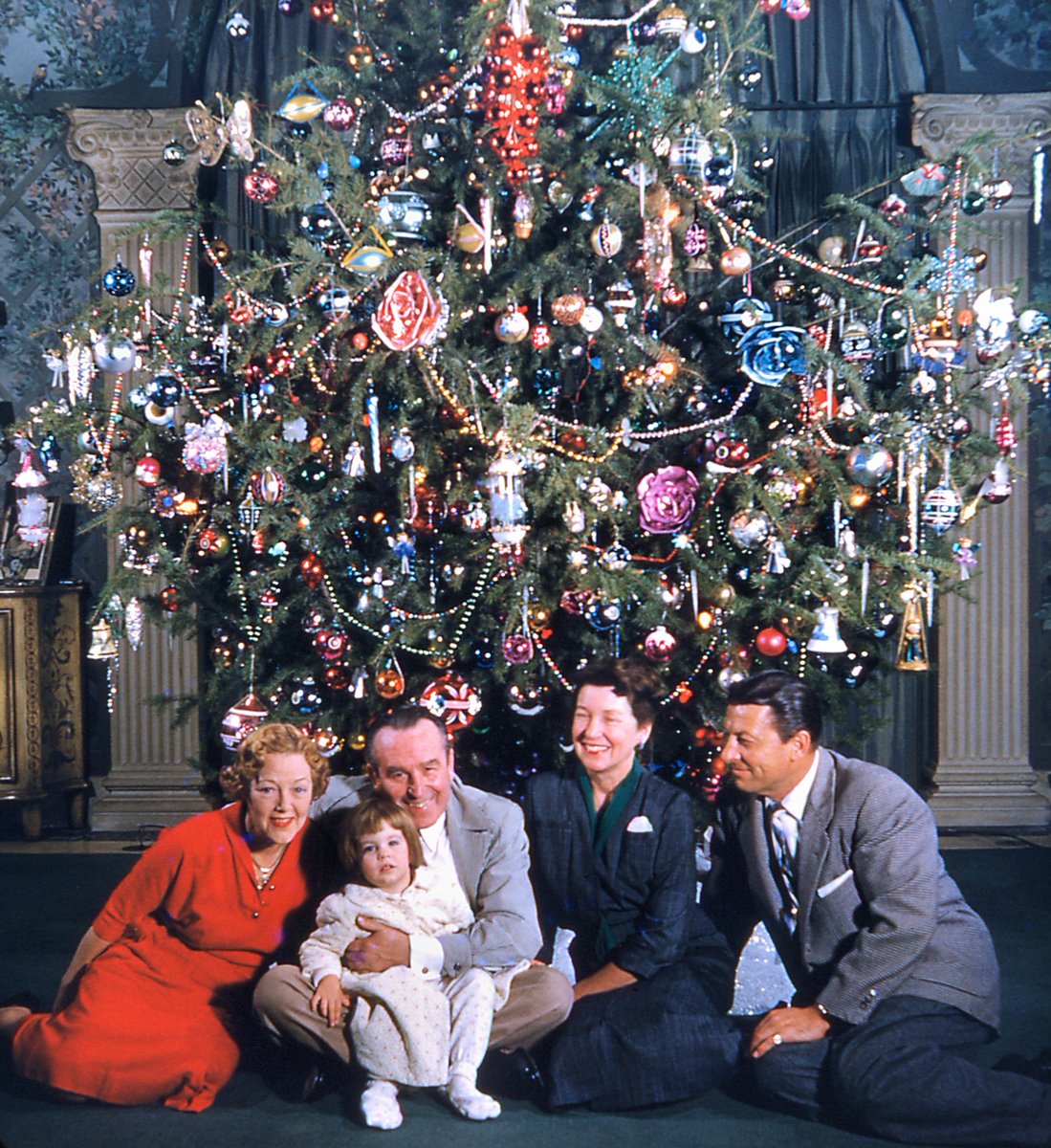 Harold and family (and friends?). Not sure where this image came from, but it’s a nice one, isn’t it?

On his 15-acre estate Greenacres, boasting a 44-room mansion, 9-hole private golf course, a 900-foot man-made canoe stream, and what was once southern California’s largest swimming pool, Lloyd “knew how to keep Christmas well,” as Dickens would say. The main attraction of the Greenacres holiday season was always its mighty Christmas tree…which, as befitting its silent comedy megastar owner who always thought big, was no ordinary tree but three trees lashed together. The ginormous decoration was 20 feet tall and no less than 30 feet around, and stood proud at the end of the Lloyd family’s orangery. By the 1950s it held something in the neighborhood of $25,000 worth of ornaments collected from around the world–and was starting to be left up until March. 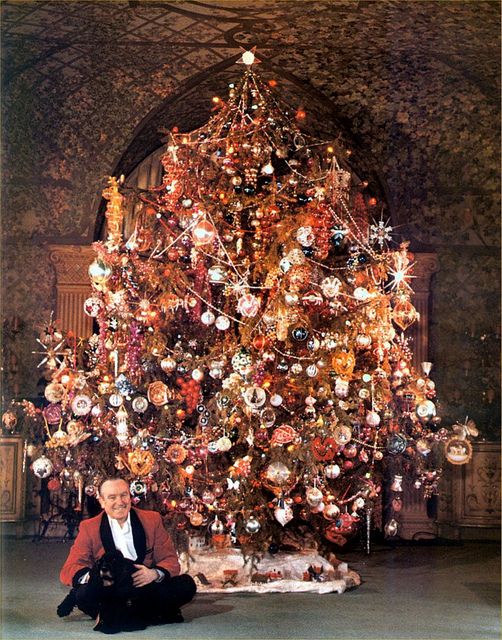 Pretty spectacular, eh? Ah, but this must’ve been earlier on in the Saga of the Mighty Tree. For by the 1960s, not only had Lloyd’s ornament collection grown to even more ginormous proportions, but the business of decorating the tree had become so time-consuming that the Lloyds decided to keep it up year-round.

Just look at this beast. 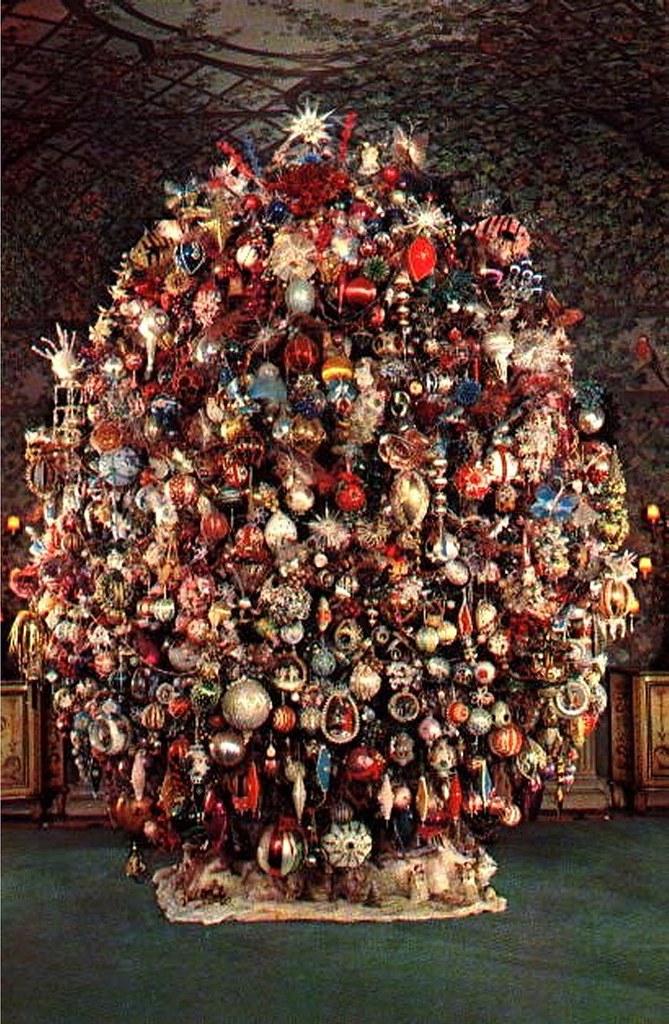 Lloyd’s granddaughter Suzanne would share her fond memories of that eye-popping holiday centerpiece:

It took from Thanksgiving until Christmas to decorate the tree. Over the years, my grandfather had collected thousands of ornaments from all over the world. The tree held one-of-a-kind rare ornaments valued in the hundreds of dollars when they were first purchased in the `30’s and `40’s. The tree also held homemade ones that Harold received from his charity work.

I remember a jeweled encrusted ostrich egg, and a sequined football (a reference to the college football hero Harold Lloyd played in his most popular film, “The Freshman”). I particularly loved a Christmas ball given to him by his friend, make-up artist, Wally Westmore, that was a miniature diorama depicting a bespectacled Harold in a red bathrobe trimming the tree.

When the Lloyds decided to make the tree a permanent decoration, Suzanne recalled that they had it fireproofed first. They also reinforced the branches with bamboo and steel bolts. Over the years, it came to hold a collection of over 5,000 ornaments, “…and we still had enough left over to decorate three more trees just as big!”

After Harold’s death in 1971, the tree stayed up for a few more years until 1975, when Greenacres had to be auctioned off. The tree was dismantled and apparently tossed–but what happened to all those ornaments is uncertain (at least to me!). This is purportedly a photo of a few of them: 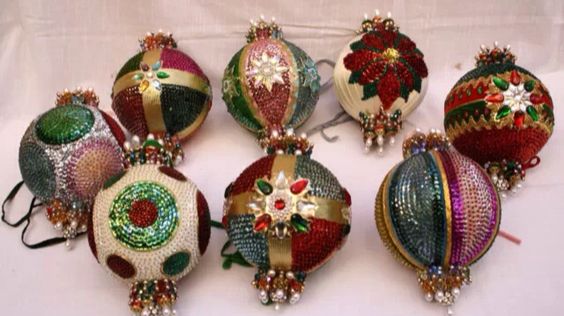 Every once in awhile an eBay auction will claim to have ornaments from the Greenacres collection, but I’d stay skeptical if I were you.

Today, many years later, Harold Lloyd’s love of Christmas is a permanent part of his epic legacy. So I’d say that if I were to head back in time for an old Hollywood Christmas holiday, that Greenacres “is the place to be”!

A very Merry Christmas and a joyful holiday season to all! Only a few days left of 2017 to go…I’m already looking forward to Silent-ology’s plans for 2018!

A Pithy Guide to Greenacres, the Estate that Laughs Built