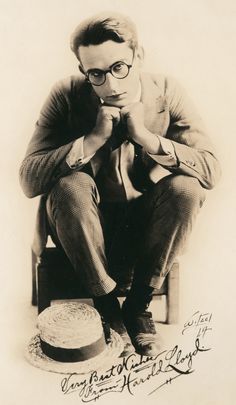 But this fabled “sentimental Charlie” we’re familiar with today wasn’t the character that 1910s audiences went crazy over. Quite the opposite, in fact! My friends, if you’re leery of supposed sappiness in Chaplin’s work I must urge you to get acquainted with…Keystone Charlie.

Keystone Charlie, or Charlie Chaplin in his earliest films at Keystone, is the very opposite of “pathos.” He thinks nothing of kicking someone through a doorway or slinging bricks at an opponent. He thumbs his nose at bystanders, wanders drunkenly through respectable hotels, and cheerfully sits way too close to annoyed girls in parks. He will, say, comfort a bullied hotdog vendor only to end up stealing one of her hotdogs.

Charlie at Keystone in a nutshell.

He’s basically an amoral rogue who ends up obliviously–or intentionally–being a rude pest to everyone he meets. In short, he acts the way any mischievous boy wishes he could behave, and gleefully so. 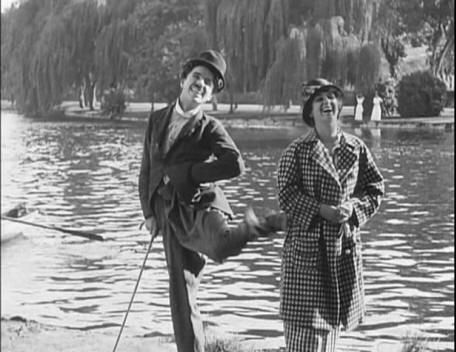 This was the character that became famous, without a drop of sentiment around. People who know Chaplin mainly from his polite Little Tramp of the impeccably filmed City Lights might be thrown a little for a loop.

It’s useful to know that at the time, it wasn’t unusual for comedians to play annoying bumblers. People acting inappropriately in polite situations was easy fodder for laughs, so just about everyone from Ford Sterling to Billie Ritchie to Roscoe Arbuckle put their stamp on that type of character. What set Chaplin apart was likely his charisma with the camera, his talent for improvising quick gags, and of course, that instantly-recognizable costume.

A bit of background: Chaplin had joined Keystone in 1914, apparently in order to help boost his stage work. By the end of that year, a mere 36 shorts later, he was one of the studio’s most popular funnymen. He then signed a contract with Essanay in 1915, where he released the 15 shorts that made him an official megastar. He then made the move to the much-loved Mutual series of 1916-1917. So even before the world made the leap to calling him an “artist” and a “genius,” he was a household name, so popular that some reporters dubbed society “Chaplin mad.”

At Keystone, Chaplin’s shorts were churned out very quickly, along with the bucketloads of other shorts starring Keystone’s many comedians. While they weren’t always as primitive as many folks assume, there was definitely plenty of slapstick and silly throwaway gags. Since they were often filmed in nearby parks and city streets, they can also be priceless glimpses into a more unpretentious Hollywood.

Chaplin’s Keystone/Essanay body of work seems less familiar to casual silent comedy fans than his more polished Mutual two-reelers, even though its essential to his stature of one of history’s finest comedians. And there’s so much of it to choose from–there’s arguably much more of this mischievous, amoral Chaplin than there is of the sympathetic Tramp of later years. So when folks complain that Chaplin’s films are “sentimental,” I can’t help thinking, “Well sure, sometimes…but not always!”

And so, my friends, if you haven’t seen much of Chaplin’s work beyond his ’20s and ’30s films and are quick to write off this master comedian as “too sentimental,” I urge you, check those old shorts out! They show a freer, wilder side of the Tramp, a side that audiences were familiar with long before he even thought to branch out into features. They’re make for excellent study as you track his progress throughout those few, precious years. And of course, they’re simply a lot of wacky and thoroughly unsentimental fun.

Note: All images from Chaplin films made from 1918 onwards are copyright © Roy Export S.A.S.  Charles Chaplin and the Little Tramp are trademarks and/or service marks of Bubbles Inc. S.A. and/or Roy Export.

This post is in honor of the Charlie Chaplin Blogathon, hosted by Little Bits of Classics and Christina Wehner. I’m very happy to be a part of an event that’s paying tribute to the most iconic figure in cinema!

Be sure to check out all the other posts, and if you’re new here, feel free to make yourself at home!

15 thoughts on “Was Chaplin Really That Sentimental?”