It’s with a resounding “Hurrah!” that I greet CineMuseum’s newest release, a Blu-ray/DVD combo of Roscoe Arbuckle’s first feature film, The Round Up (1920). If you’ve read any of my Comique Month series from last July, you’ll know that I’m a big Arbuckle fan. So having this charming Western available is a nice boon for my collection.

Prior to making The Round Up, Arbuckle had been first a Keystone comedian and then a top-notch comedy director and star at his own studio, Comique. He famously gave Buster Keaton his first film roles. Around 1919 he got an offer to star in features, so he handed over the Comique reins to Keaton and went to work on feature #1. 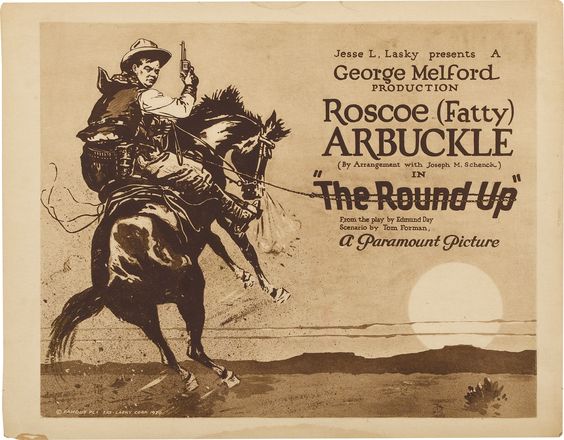 Sadly, after working like crazy on several features in a row (early 1920s studios churned out features as fast as a mini donut machine), the infamous Rappe scandal hit and Arbuckle films were pulled out of circulation. And thus, The Round Up was unavailable for nearly a century–until this very spring!

An interesting bit of trivia: This feature was based on a 1907 play that starred well-known stage actor Macklyn Arbuckle. Macklyn was the actor who coined the doleful phrase “Nobody loves a fat man,” but after The Round Up was released in 1920 the phrase was forever associated with the other Arbuckle–Roscoe! 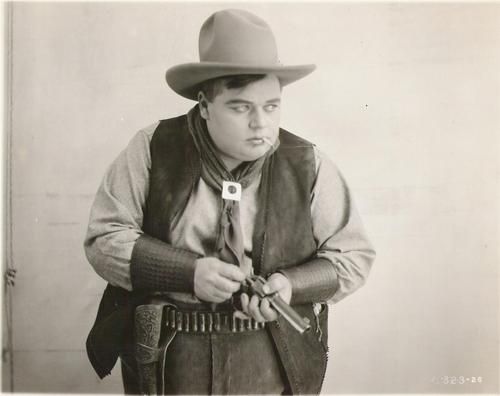 Arbuckle was given the role of Sheriff “Slim” Hoover so he could work while films more tailored to his talents were being prepared. In general, cowboy heroes in silent Westerns tended to be lean, strong-jawed types like Tom Mix, so Arbuckle’s role was a little atypical. But he does an excellent job, still using his familiar comic timing and flourishes but within a more subtle, “light comedy” format.

As a whole, The Round Up is a pretty standard Western drama with familiar situations and characters (Wallace Beery plays a villain, because of course), enlivened by Arbuckle’s presence. This particular DVD set, however, has the advantages of Donald Sosin’s evocative new score (Sosin’s one of my favorite silent accompanists), and the beautiful print quality.  CineMuseum performed a stunning 4K digital transfer and restoration from the 35mm archival master print preserved by the Library of Congress and Paramount Archives. As a result, we’re presented with a crisp, perfectly tinted film looking pretty much the way a 1920 audience would’ve seen it. This is the sort of thing we silent film fans live for! 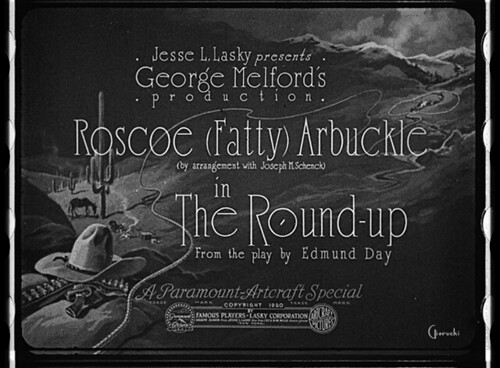 And by the way, you’ll want to keep your eyes peeled for a certain famous “Easter egg” in the form of Buster Keaton making an unbilled appearance as an American Indian. (By a painful-looking fall ye shall know him.)

Also included in the set are the Keystone shorts A Bandit and Peeping Pete (both 1913, and both in very nice quality), a commentary track by historian Richard M. Roberts (I always enjoy CineMuseum’s commentaries!), a gallery of posters and other promo items, and a booklet. This release is fascinating for both silent comedy fans and lovers of old Westerns–and it’s certainly important for Keaton completists! You can buy it here.

Last fall I conducted a drawing for this fine new film, and it’s about time I gave it a proper review!

In the 1920s there was a film genre called the “city symphony,” where directors created portraits of famous cities using montages of carefully composed shots of buildings, transportation, people, and so on (a famous example is Berlin: Symphony of a Great City, from 1927). A few years ago filmmaker Alex Barrett decided it was high time for London to have a city symphony of its own, and after much hard work his dream has taken shape in the topnotch documentary London Symphony.

The film’s divided into four “movements.” the first concentrating on London’s oldest buildings and then moving to construction sites and skyscrapers, the second capturing parks and markets, the third showing museums and London’s many places of worship, and the last exploring the Thames waterfront and glimpses of nightlife. The footage is accompanied by a magnificent score by James McWilliam, a lush orchestral piece that I could listen to all by itself.

Filmed in crisp black and white, each shot of London Symphony is impeccably composed.  I can only imagine the amount of editing it took to piece together all that footage, especially so the images could flow not just visually, but often thematically, too. And for a city that has some of the most-photographed scenery in the world, the cinematography captures angles and scenes that feel completely fresh and new. The UK trailer said: “LONDON…as you’ve never seen it before,” and I can confirm this is true.

Barrett no doubt pondered how his film would be compared to the city symphonies of the past, and what place this type of genre might have in society today. Architecture is a huge part of the film, much of it modern, giving an impression of a sleek and dynamic London–fitting for one of the world’s top business centers. And many of the shots are of the parts of London the tourist rarely sees–although I was gratified to see a few shots of landmarks like the Tower Bridge and British Museum. Somehow, it wouldn’t have felt right to leave those out entirely. (Barnett explained in an interview that he felt it important to capture both the everyday, hidden side of London and its famous side, too.)

Barrett includes affectionate nods to film history’s past, showing a Chaplin statue, Eadweard Muybridge footage, and more. I was also happy to see the reverential treatment given to London’s many churches, temples, synagogues, and mosques, places that are a part of so many residents’ daily lives. These shots make you ponder the long and shifting history of the city, and how it’s attracted people from across the world throughout the centuries. Overall, the film has a joyous feel to it–a sense of celebration that’s refreshing to see in our often-cynical society.

Aside from being so beautifully photographed, London Symphony is perhaps the most authentic modern silent film I’ve seen. It’s not simply an homage to the techniques of the 1920s (like the endearing The Artist) but studies and then draws on those techniques to create a work of art that stands on its own. This is how it’s done, folks.

Bonus materials are London Medley (1933), a 10-minute city symphony showing “intimate glimpses of life in the Old World’s greatest metropolis”; Hungerford: Symphony of a London Bridge (2009), a 3-minute film by Barrett showing the footbridges of London; and an exclusive interview with Barrett on the various aspects of his London Symphony. You can buy the film on region-free Blu-ray here, or on region 2 DVD here.

Many thanks to Paul Gierucki of CineMuseum and Alex Barrett, director of London Symphony, for my review copies of these films!