Per a reader’s request, here is a piece on one of the greatest and most respected silent film legends–Lon Chaney. As you read this, I am currently at the San Francisco Silent Film Festival–and yes, I’ll be recapping every moment of it!

There was a popular, widespread joke back in the 1920s–“Don’t step on that spider, it might be Lon Chaney!” A joke which, of course, referred to his remarkable use of makeup and acting skills to create bizarre characters who stick in the popular imagination. Indeed, Chaney was one of the rare actors who was so skilled that he became a legend in his own time, graced with the title “The Man of a Thousand Faces”–a title which is linked with his name to this very day.

His birth name was Leonidas Frank Chaney, and he was born in Colorado Springs on April 1, 1883. His parents, Frank and Emma, were both deaf and mute. They had met at the Colorado School for the Education of Mutes, which had been founded by Chaney’s grandfather. Being the child of parents who couldn’t hear or speak, Chaney became adept at pantomime, which proved a useful training ground for his career–not only because of the pantomime used in early films, but because it made him more in tune with facial expressions and subtle gestures. When Chaney’s mother fell ill and developed rheumatism in her hands, she and Chaney reportedly would communicate only with their eyes. 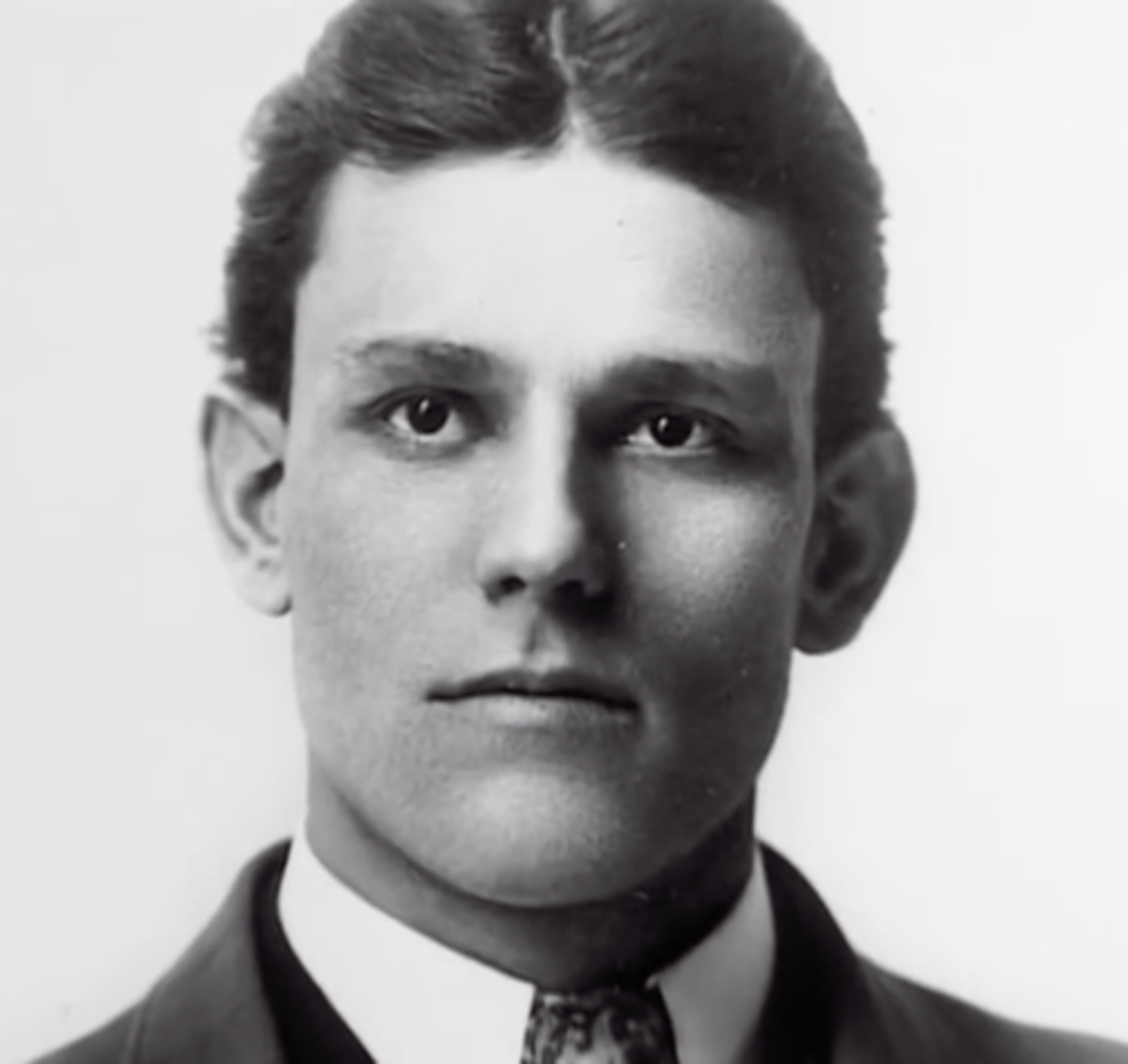 As a young man Chaney quickly became set on having a stage career, and in 1902 he began working in vaudeville. He enjoyed a variety of stage roles and would also assist with costumes, makeup and choreography. In 1905 he married stage singer Cleva Creighton, and on Febrary 10, 1906 their son Creighton Tull Chaney was born (he would one day go by Lon Chaney Jr.). It’s said that little Creighton was born premature and not breathing, and that Lon, not knowing what else to do, rushed outside into the cold, knocked a hole in the ice of a lake and dunked the infant in the water, shocking him back to life.

Unfortunately, the marriage proved to be an unhappy one, involving jealousy and Cleva’s growing drinking problem. In April 1913 the Chaneys were in Los Angeles where Lon was working at the Majestic Theater. One day Cleva went to the theater, stood in the wings and attempted suicide by drinking mercuric chloride. While this dark, dramatic gesture didn’t claim her life, it did destroy her singing voice and caused a scandal that essentially put an end to Chaney’s theatrical career. He would divorce Cleva and take custody of his son, and with his stage options now closed, he had no choice but to fall back on a less lofty line of work–acting in motion pictures. (At least, it was less lofty back in 1913.)

He became an extra at Universal, partly because of his skill with makeup, and soon proved himself to be a reliable supporting actor. His earliest role that we can confirm was in Poor Jake’s Demise (1913), starring comedians Max Asher and Louise Fazenda. In 1914 he would remarry a woman named Hazel Hastings, and it would be a happy and lasting union.

Over the next few years, Chaney appeared in dozens and dozens of films, playing a wide variety of characters and often specializing in villains–an easy fit for a man with the square-jawed, rough-hewn face of a boxer or a steel worker. He grew deeply interested in creating detailed makeup effects, and would photograph his various experiments to pinpoint what would be convincing onscreen. He kept his various greasepaints and other tools of transformation in a simple lunchbox–one day he would use a toolbox. Chaney attracted attention as the villain Hame Bozzam in William S. Hart’s western Riddle Gawne (1918), but he got his breakthrough role in the drama The Miracle Man (1919). Chaney played a contortionist nicknamed “The Frog” who’s part of a gang that moves to a small town to escape the police. They discover that a faith healer has much of the town in thrall. They decide to scam the townspeople by having The Frog pose as a cripple and pretend to be miraculously healed, and then use the resulting excitement to collect funds–supposedly for a chapel. But their plans go awry when a little boy really does experience a miraculous healing, and the gang’s, shall we say, “faith in fakery” is shaken.

Sadly, much of this intriguing The Miracle Man is lost, but luckily surviving clips show The Frog experiencing his “miraculous” healing. Chaney’s exceptional use of jerky body language to convey crippled limbs becoming straight is so convincing that to this day many people believe he was double-jointed, or at least knew how to dislocate his shoulders–not so. The performance put Chaney on the map as an exceptional and in-demand character actor. 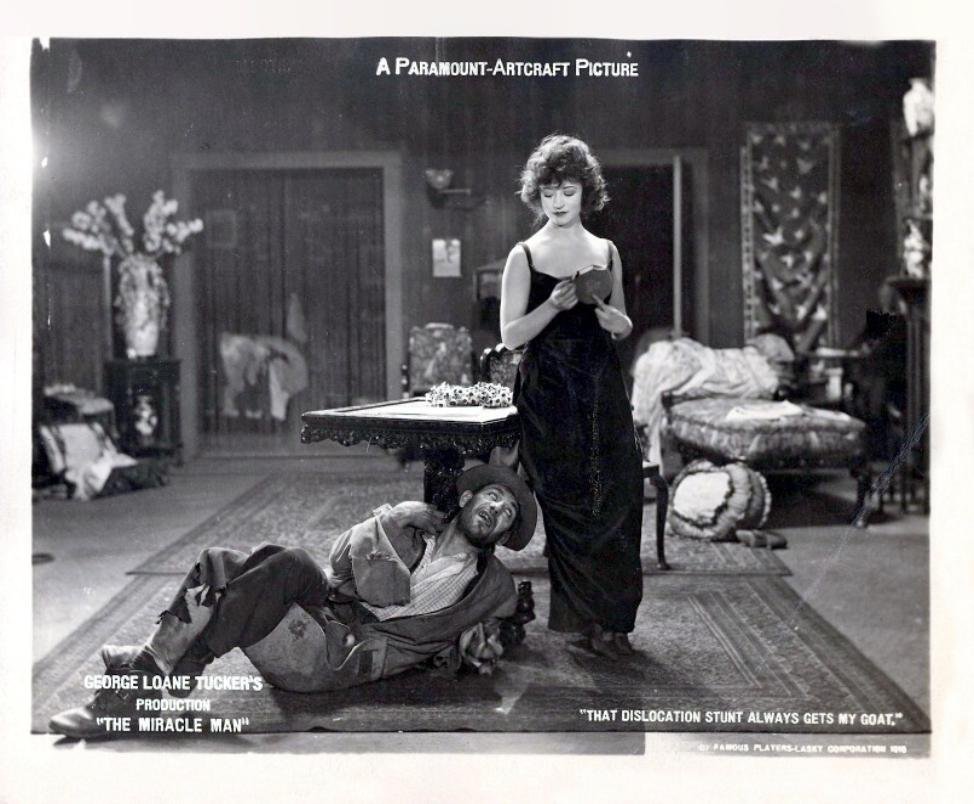 Picture-Play Magazine interviewed Chaney in 1920, and the writer noted with some surprise:

The longer I talked with Lon Chaney the more paradoxical he proved to be. I had expected to find he was a circus contortionist or, at least, a veteran character actor. He is merely a talented young man with a hobby for cooking, painting, wood carving, modeling in clay, and in grease paint. He contradicts all notions of what an actor and villain should be…Acting to him means the creation of a man, whereas most of our favorite actors portray their personalities as pigment, Chaney, like the artist of sculpting or painting, creates from an imaginative model which has nothing to do with himself.

This would prove to  be a rare peek into Chaney’s home life. Soon he would shy away from interviews and steer clear of Hollywood social events, preferring to keep the focus on his characters. He would once say: “My whole career has been devoted to keeping people from knowing me. It has taken me years to build up a mystery surrounding myself, which is my stock in trade.”

The Penalty (1920) is a fascinating example of his commitment to that stock in trade. Chaney plays a criminal whose legs were unnecessarily amputated above the knee after a childhood accident, and who finally decides to take revenge on the doctor. Chaney tied his legs back with special harnesses and walked on his kneecaps to portray the amputee, which was so painful that he could only act for ten minutes at a time. Originally, the film included a shot at the end of Chaney walking down a staircase–to prove the actor did have normal legs. 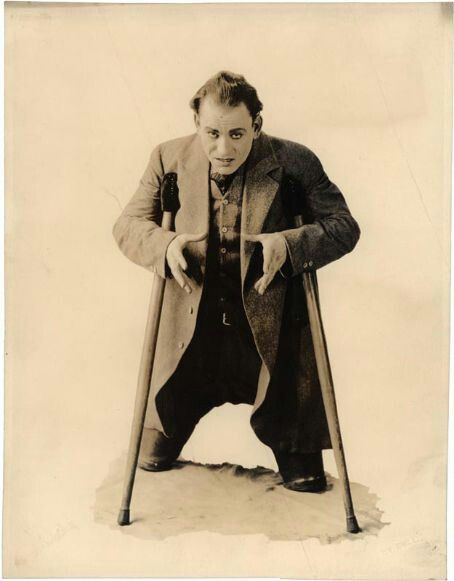 His fame only increased with The Hunchback of Notre Dame (1923), a huge hit that featured his most extreme makeup. As the grotesquely deformed Quasimodo, Chaney used layers of cotton and colodium on his face and sported fake teeth and a 20-lb hump on his back, all of which took three hours to put together. He also used a brace to keep himself in a hunched-over position special contact lenses  and (in the 1920s these would’ve been made of glass). He was paid the generous salary of $2500 a week–a big achievement for someone who, in his early Universal days, was once told he would never be worth more than $100 a week.

Other iconic roles included the circus clown HE in He Who Gets Slapped (1924), the first film to begin production with the newly-formed MGM studio; Sergeant O’Hara in Tell It to the Marines (1926), which earned Chaney an honorary membership in the U.S. Marine Corps; and, of course, the titular Phantom of The Phantom of the Opera (1925). Chaney’s elaborate makeup was kept a complete secret, for maximum screen effect. Not only did the famous unmasking scene scare the daylights out of countless audiences (publicity stories claimed some people fainted), but it seems to have stuck in their minds long after other movie memories had faded. Even decades later, old-timers would recall their childhood terror of first seeing that ghastly face.

Chaney’s other iconic role is one we haven’t even seen–the ghoulish character from the thoroughly lost London After Midnight (1927). With his pointed teeth, long hair, and top hat, Chaney was the embodiment of many a Halloween haunted house decoration. Although it’s one of the most sought-after silent films (despite getting lackluster reviews in its own day), London After Midnight unfortunately shows no signs of turning up.

Tod Browning’s The Unknown is not only one of Chaney’s bizarre best but it also contains one of the rawest moments of horror in cinematic history. (SPOILERS at the end of this paragraph.) Chaney is Alonzo the Armless, a performer who secretly binds his arms to pose as a circus freak with a knife-throwing act (he keeps his hands out of sight so his double thumb can’t identify him as a former criminal). He falls hard for beautiful Nanon, a fellow performer who has a phobia of men’s arms and can’t stand being touched by them. But she’s comfortable around Alonzo, and he’s so head-over-heels in love that he decides to go through an unbelievably extreme act of devotion–have his arms amputated so they can be together. Unfortunately his rival, the strongman, is able to overcome Nanon’s phobia and Alonzo finds out too late that he’s had his arms amputated for nothing–a truly horrifying moment of realization that Chaney plays to the hilt. 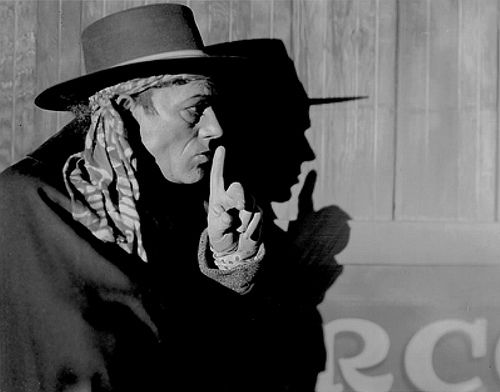 Chaney wasn’t enthused about the advent of talkies, feeling that if audiences heard his voice it would destroy his mystique. Eventually he was talked into appearing in the crime drama The Unholy Three (1930), playing the ventriloquist Echo–and giving a solid performance. But sadly, it would be his final film. Lung cancer, which he had been secretly enduring for some time, finally claimed his life on August 26, 1930 after he began hemorrhaging uncontrollably. News he had been taken to the hospital had moved countless fans to call the studio offering to donate blood, and the news of his death shocked both the public and the industry alike.

Fortunately, Chaney’s elaborate makeups were not doomed to obscurity. Today he continues to awe and inspire, one of the rare actors whose work is considered untouchable. And it’s moved some of his fans to declare, “Lon Chaney Shall Not Die!”

I highly recommend this classic documentary on Chaney’s life–another important source for this article!